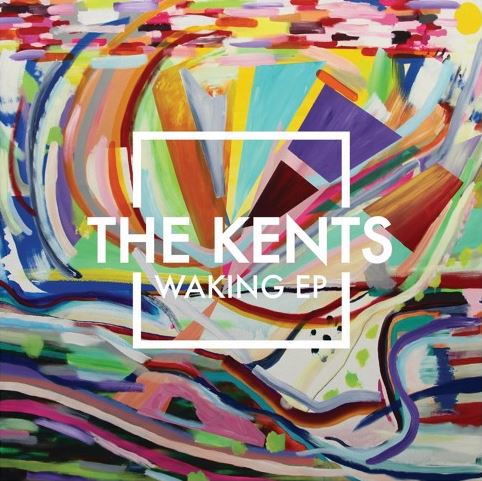 In the movie Begin Again, Marc Ruffalo plays a washed up, alcoholic, once genius record producer who, after deciding to step in front of a subway train, stumbles into a bar for one last drink to find a sheepishly shy  Kiera Knightly playing an to an indifferent audience at an open stage.  Her performance inspires Ruffalo to produce and record an album for her creating an amazing, artsy pop album.  If that movie would have had Marc Ruffalo drunkenly discovering a life-changing band, it should be the Kents, a great example of unabashed, well-crafted pop music.

The first track “The Stakes” opens with a campy guitar riff and falsetto vocals preparing listeners for a good head bobbing, driving home, possible air guitar, experience.  The tone of the song, and the album itself, surprisingly changes with Frank’s first vocal line, a deep, smooth voice reminiscent of the Tea Party’s Jeff Martin, the phrasing of the King of Leon’s Caleb Followill, and the tonal edge of a mature Peter Gabriel.  At this point, the album has turned into Peter Gabriel being the front man for Kings of Leon if Joey Santiago from Pixies was on lead guitar.  “The Stakes” is incurably catchy, with a distinct fuzzed bass sound juxtaposed with airy, ambient guitar riffs; surf guitar and 90s industrial bass with impeccably clean drums and rich vocal presence.  The chorus should have Teagan and Sara making a guest vocal appearance.  Make it happen for the next disk, gentleman.

“I Know” continues the Joey Santiago sound with a Johnny Mar single note riff, a moving bass line wraps around the vocals and tasteful drumming.   There is a laid back vibe to this tune with a clever rhythmic motif passed back and forth between the rim of the snare and the high hat, adding a gentle push to the solid, yet gentle, groove.  Great turns of rhythm and unison parts creates a creative contrast to the tune’s openness.

The opening line of “I Know” is a great example of the strength of the lyrics throughout the EP, where the lyric lines often change length and do not always follow a concise rhyme scheme, or, in this case, shies away from the rhyming couplet to use slant rhymes instead: “Oh brother, brother can I show where to go now / I’ve seen the picture as you’re lost in the wild crowd / I can’t believe it the way that you’ve fallen / pushed down so far seeking any explanation.”  This subtle change in the rhyme scheme formula, and creative word choices, displays the intentional, various writing styles of the Kents, taking the Weakerthans approach to songwriting by not taking the expected route.

“Something About Her” could be the hidden track on an unreleased There’s Something About Mary soundtrack.  Lyrically it is a perfect fit and the pop credentials and catchy riffs to go with it.  Great choice of guitar and background sounds creates tension before the release of the straight ahead chorus.  The breakdown section, where the band is “searching for my remedy”, would make the Killers, who’ve “got soul but not a soldier”, jealous.  This section of the song needs to be used for an inspirational commercial or event, like K’naan’s “Wavin’ Flag”.  If the Kents’ PR agency is not on it yet, they better be.

“Once More” is heartbreaking and honest, bound to be used by multiple listeners on break up, or apology, compilation cds (or mixed tapes for the old school crowd).  Frank gets to truly display his vocal mannerisms here, showing his beautiful and controlled vocal tone and lines.  His voice is an impressive blend of rock edge with singer-songwriter expression, emotionally raw with a little Gordon Lightfoot phrasing.  The bridge opens to the full band projecting resilience and growth, going right into another anthemic section the Killers wish they wrote.  Not many bands can pull off a good anthem ballad past 1986, but here it is.

“Playing with Fire” sounds like a B-side Matthew Sweet recorded with the Arkells, closing off their album with their distinct mix of pop gold and music maturity, an album the most genre specific music critic will enjoy.

The Waking EP has a smoky, ghost-like sheen, adding a mysterious maturity to the sound without detracting from the accessibility of the song writing.    The smoky, yet sparkling, production was done by JUNO-nominated Derek Hoffman (Elwins, DCF) with mastering by Dan Westin (Shad, City and Colour).

The Kents’ Waking EP is an immensely strong debut with artful lyrics, catchy riffs and singalong choruses for everyone.  Enjoy!

BONUS TRACK: The following is a list of genre tag lines that were considered for this review:
“If Black Francis’ Folk Singer Older Brother Created a Companion Album to Bossa Nova”
“Artistic, Art Pop Even Your In-Laws Will Love”
“Ghostly Pop for Tangible People”
“Art Pop Comparisons to the Trews, the Tea Party, and By Divine Right Later in this Review”
“The Waking EP is Way Better than the Walking Dead”
“If the Kings of Leon and the Weakerthans had a Play Date with the Killers.”

The Kent’s debut Waking EP is available on itunes and soundcloud.  The Waking EP cd launch was in Toronto, On, at the Horseshoe Tavern, June 04th.   Then check them out at:  Ottawa, On, Live on Elgin, June 05th; Lindsay, ON, The Grand Experience, June 18th; Guelph, ON, District, July 07th; Windsor, ON, Phog Lounge, July 08th; Hamilton, ON, Baltimore House, July 09th; Coutrice ON, Mill Park, July 13th; Kingston, ON, The Mansion, July 16th; Sault Ste. Marie, ON, LopLops, July 29th; Thunder Bay, ON, The Foundry, July 30th.