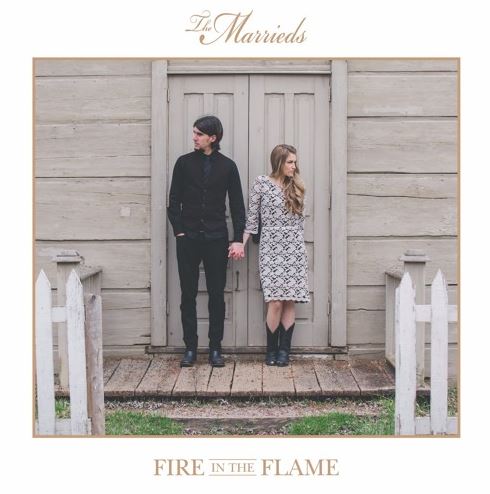 London, ON duo, The Marrieds, is made up of Jane Carmichael and Kevin Kennedy. The two released their third album Fire in the Flame on June 4th, and it’s full of tales that everyone can relate to in some way or another. Fire in the Flame is the first release from the couple since their 2013 album Saving Hope.

The nine songs on the album are all beautifully played, with the melodic sounds of acoustic guitar matching their vocals and harmonies perfectly. “Après Vous” opens the album with softly played guitar before Carmichael’s calming vocals come in, leaving the listener little choice but to close their eyes and sway along as they take in the lyrics. “Burning Heart” picks up the pace a bit with the added benefit of hearing more of Kennedy’s vocals alongside Carmichael’s. “A Girl Said Yes” shows off even more of Kennedy in another upbeat song about a love story between a boy and a girl because he had the courage to write a letter and she had decided to say yes. “Rita” gives the listener the pleasure of even more harmonies between the two, showing off how well their voices play off of each other. The title track closes off the album with a slower song portraying Carmichael’s voice in an almost haunting way when paired with the somber strings in the background.

I hadn’t heard of this duo until now but I won’t let that happen again. Their voices pair together so well with the music, you won’t want the songs to end. Though the songs may be not be for those that like an upbeat album, those that like more acoustic sounding songs will thoroughly enjoy the nine tracks.