Review – My Son The Hurricane 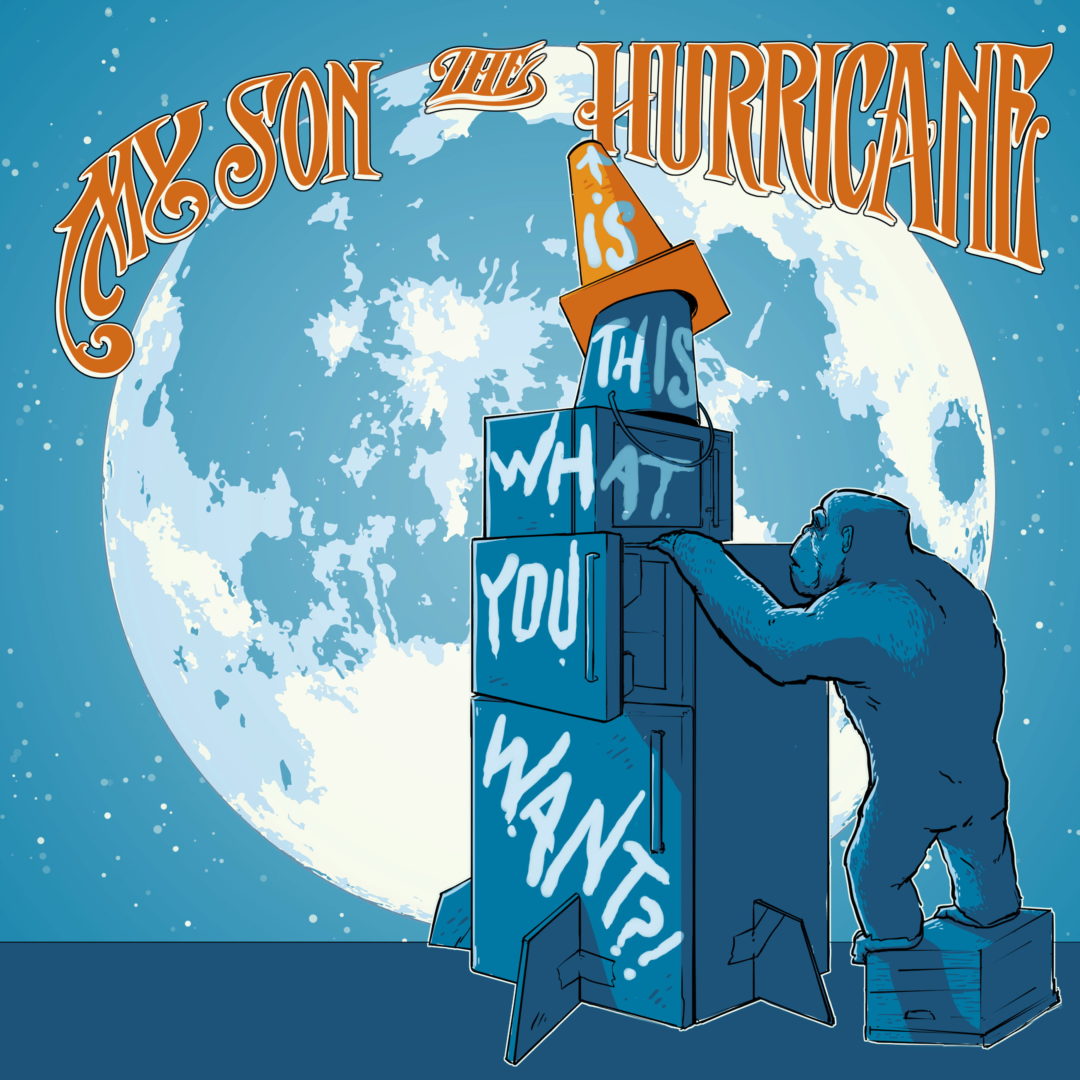 What has 28 arms and legs, 140 fingers, greater air control then a TESLA weather machine, and more members than Regina based Government Town?  Niagara and Toronto based My Son the Hurricane, that’s who!  (Sting!)  Government Town’s review for III used up my only “big In Japan” joke, so all that can be said is My Son the Hurricane, at an impressive 14 piece ensemble, is even bigger in Japan.  I’ll work on that one…

“Smoke and Mirrors” opens the album with a distinct Hall and Oates vibe being played though bendy, fun house mirrors.  Double bass drum, smashing cymbals and drum-fills propel the guitar and horn pushes. The Mighty Mighty Bosstones in intent with Rage Against the Machine vocals, this track will create spontaneous air bands in automobiles worldwide.

The next track “Birthday Cake”, prepares listeners for a cruise line beach party, with a fiesta sounding guitar riff and straight ahead thumping bass drum, to set the good times in motion.  Punchy horn lines soar with a prominent bari sax riff.  This track is just one example of the numerous, cleanly arranged and precisely played horn lines that appear throughout the cd, such as in “Bottles Into Money” and “Head Above Water.”  Growing up loving Huey Lewis and the News, this album would have blown my young, twelve year old mind.

The production on the horns is great representing the true sound the players can produce. Often brilliantly played ska records are derailed by unsupported horn sounds, where the listener can tell the winds can play, but sound weak and unsupported.  Nice full horn tones with wise use of harmonies and doubling.

The fiesta party turns into a solid infectious groove (yes, that is a band name reference) that spreads down one’s limbs, the kind of grove that the body instinctively follows, muscle memory kicks in and even the worst dancers will shake their misguided hips.  Vocally, “Birthday Cakes” switches up from party fiesta to Fishbone, quick clean rap propelling the story along (random “Bwaaaah” vocal sound included). The song kicks into the best chorus Len never recorded, Sylive Kendries’ vocals sail on top of solid chords and trumpet shots, a great juxtaposition, just in time for…bari sax solo.

Alright, I don’t write myself often in the first person into a review, or clearly state my bias (which a review is, only more veiled and poetic), but any band that includes a barrage of bari sax in the first two tracks of their record deserve my attention.

Phil Skladowski, the best real, but sounds made up, name ever, has a commanding presence on the bari, holding down the harmonic foundation and soloing with great structure lines and big tone throughout. The upper range of the bari can be a beast to keep supported and Skladowski keeps a strong tonal foundation throughout the instrument.  From here on in, Skladowski will now be referred to as Skadowski, I am sure the pun has been made before, but it is being made official for this review.

Jacob Bergsma’s vocal lines are clear stately and cleanly articulated, letting listeners follow along with recognizable words and catchy cadences.  Rhythmically, Bergsma switches between Fishbone’s Angelo Moore, rapper Eminem with the gusto of Rage Against the Machine’s Zack de la Rocha.  Rhymes are on point and clever, never clumsy and never getting in the way of the song’s narrative.  Always clean, crisp vocals throughout.

“Rolling with the Punches” takes the listener down a classic 70s jazz vibe, Tom Scott jamming with Weather Report.  Solos abound and are all masterfully played, stylish instrumentalists who know how to fit in and around the chordal and rhythmic centre.  Each member of this group are heavy-hitters and could have their own individual profile in this review, and would be well deserving.  Fraser Gauther knows when to take the “bass out for a walk”, a la Ron Burgundy, and when to lay a rhythmic and harmonic foundation.

“Grapes” is a gritty, art house slow jam with Dr. Madd Vibe vocals, dirty Tom Waits drumming, some Dr. Beefheart dissonance, with Frank Zappa close mic narration panning hard from left to right. The chorus opens and lightens up, giving sweet relief to the “dry mouth looking to be quenched’.  Sequencing wise, not sure if it is the strongest closer for an album, but one of the strongest tracks on the record.  Hmmm…paradox producing…I need to ponder this…

Listeners will answer with a resounding “yes” if asked “Is This What You Want?!” after experiencing this masterfully played, arranged and produced album.

Writing myself in the first person again, I never read the press release until after listening to the album I am reviewing, allowing myself to go into the experience with fresh ears.  There is a link in the press kit to check out the band’s “powerhouse” live show.  My Son the Hurricane translates their live vibe to record so well that I can feel the impressive presence of their live show.  This band is energy combined with slick beats, artistic creativity and catchy, catchy grooves.  Check out the record Is This What you Want?!, then see them live as soon as possible.  The “best live band you’ve never heard of…” (blogTO) deserves a devout audience.