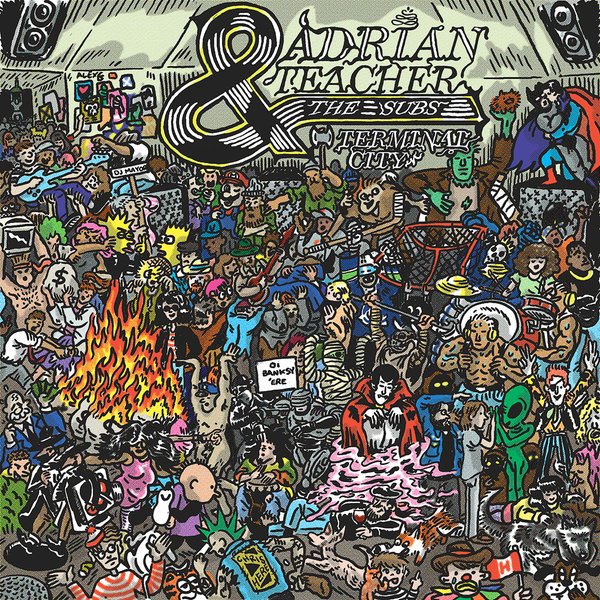 Vancouver native and former leader of Apollo Gates Adrian Teacher, along with his current band, The Subs, will release their debut album, Terminal City, through You’ve Changed Records.  Consisting of drummer Amanda P and bassist Robbie N, Adrian Teacher & The Subs looks to bring a refined touch to today’s indie rock cannon but inviting an array of influences from the past to spark life into the genre, today.

Describing themselves as English pub music in the tone of proto-punk, Adrian Teacher & The Subs have created a collection of songs reminiscent of Elvis Costello as well as the godfathers of indie, REM.  From the cleanly picked arpeggiated guitar of the opening track, “Emily Carr Punks”, a very mellow and incredibly open vibe is quite apparent.  While this sense of spaciousness is an ever constant feeling throughout the album, Adrian Teacher & The Subs do an excellent job of incorporating very contrasting elements as a means of adding more layers to their already solid work.  In fact, it is when they do this, as best heard in the bridge of “Called Up”- which sports a distorted, alternative rock texture- in the funky grooves and horn accents of “Forgetting America” and in the Rolling Stones inspired “Westfalia”, where Terminal City truly shines.

Indie rock is a problematic term; while it traditionally represents a DIY attitude, it now has attached a sound to the word.  While Adrian Teachers & The Subs certainly fall into the indie rock category, in many ways, they have strayed from such expected sonic waves, and it is where they are uncharacteristically indie where they are at their most unique among the flooded indie genre.  Adrian Teacher & The Subs , through Terminal City, have demonstrated a means of staying true to a style, in this case indie rock, while still adding new and unique layers which are often absent from such.