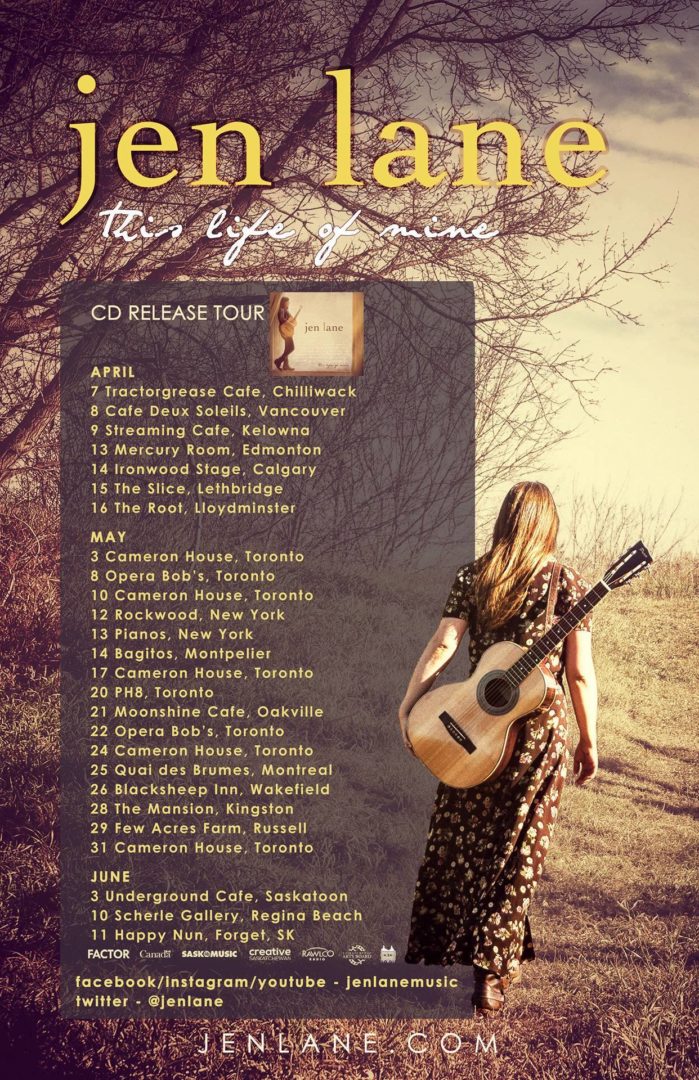 Since the release of This Life of Mine in February 2016, Jen Lane has been making her way across Canada to bring her newest tunes to her fans and to Canadian radio. From Chilliwack, BC all the way Montreal, QC where Canadian Beats got the opportunity to catch this prairie songstress in action.

Making her Montreal tour stop at the Quai des Brumes which is known for showcasing a variety of musical talent, Lane and her band brought their unique prairie-indie-folk-country sound to share with the big city of Montreal.

Lane recruited the fabulous Mélanie Brulée to open for her tour stops that include; Wakefield QC, Cornwall ON, Kingston ON, and of course Montreal QC. Brulée is a fantastic vocalist who took the time to gear the crowd up and interact with the audience. From her well-crafted originals to her franglais version of the Nancy Sinatra classic, “These Boots Are Made for Walkin’” Brulée emulated charismatic vocals and a powerful stage presence. Brulée has a well infused sound that is natural but yet has no borders.

After Brulée wrapped up her set, Lane took the stage. Since I first had a listen to This Life of Mine at the beginning of the year, I have been very excited to catch Lane performing live. While the Quai des Brumes did not have thousands of screaming fans hanging from the rafters, what it did have was a night full of great music.

Featuring songs from her last three studio albums; This Life of Mine(2016), For The Night (2010), and Jen Lane (2006) the nights set list was packed with some of Lane’s best work. From “Lie to Me,” “Waitin’ for You,” and “This Life of Mine” no song was left unsung. There is something I absolutely love about the song “Waitin’ for You.” From the first time I heard “Waitin’ for You” on Lane’s latest album, to hearing it performed last night, the song is still one of my favorite musical gems.

Lane takes the musical magic captured on her studio albums, and transforms each song into a performance. Flawlessly performing her vocals, Lane is at ease and at home on the stage.

Lane will continue to carry on the remainder of her tour, wrapping up the Ontario/Quebec portion in Toronto on May 31. If you have the opportunity to check-out Lane and Brulée between now and the end of May, I strongly encourage you to take in an evening of great singer/songwriters and fantastic Canadian music. Be sure to Connect with Jen Lane and Mélanie Brulée below to find out where they are and how you can discover the musical talents of these two artists.