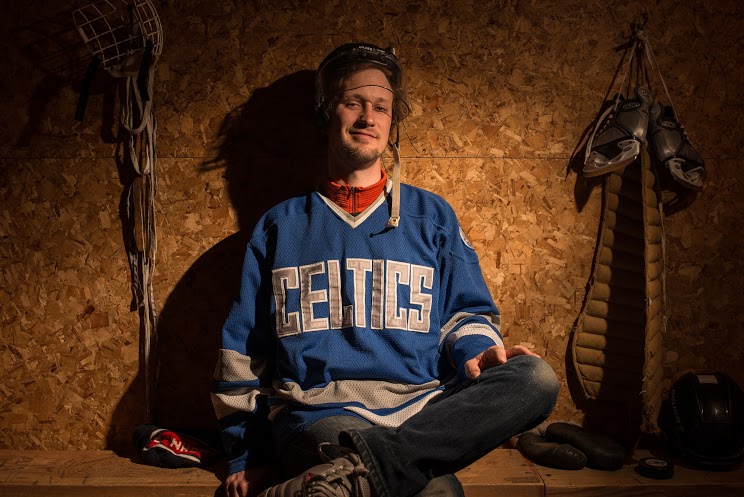 I recently had a chance to ask Manitoba based artist, Del Barber a series of questions about the Juno’s, Juno Cup and his newest album, “The Puck Drops Here”. This is a great interview for music and hockey fans alike, enjoy!

My name is Del Barber, I’m originally from Winnipeg Manitoba, now I hang my hat in the beautiful town of Inglis, Manitoba.

It was my third time playing in the Juno Cup.  It is a great event.  I love watching my music world collide with hockey. Two of my great loves coming together.

What was the highlight of the JUNO Cup and JUNO cup Jam?

The highlight of the Juno Cup celebration was definitely getting to spend time in the dressing room with musicians and hockey players.  The comradery and overall mood of the dressing room is something I miss when I’m not playing hockey on a regular basis.

You released a hockey themed album, The Puck Drops Here on April 15, what can you tell us about the concept behind this album?

The Puck Drops Here is a record full of hockey songs.  That’s all there is to it really… It’s a fun record that pays homage to our favorite game.

The album consists of covers such as Stompin’ Tom Connors’ “The Hockey Song”  and Tom Cochrane’s “Big League” as well as three original numbers, care to share a bit about the writing process behind the originals?

I’m always writing songs, writing about the things that interest me, the characters that interest me…. I’ve been writing about hockey since I started writing music… Being able to add a few originals to the record just made sense… I guess I saw it as an excuse to finish some of my hockey themed songs… What better place to let people hear them?

I’ve got lots coming down the pike:  working on a new Del Barber record. All the ins and outs of getting a record off the ground is enough to worry about (at least for me!)  When I’m off the road I work on a Cattle Ranch/Grain Farm, it’s in full swing right now.  I’m happy to have loads of work touring and farming.  I’m as busy as I’ve ever been, but I feel pretty damn happy about the whole deal.

My favorite hockey team? The Winnipeg Jets!  I cried when they left the city in the 90’s, I wept when the NHL came back to town.    I can’t really say I have a favorite player right now… Still waiting for someone to inspire me on the ice.

The last show I went to was Corb Lund in Winnipeg. I don’t get a chance to see many shows in the winter and spring.  Either I’m on the farm or I’m on the road. I’m looking forward to summer festival season,  I know I’ll get a huge dose of live music of all kinds.

My favorite springtime activity would have to be fishing.  I love to fish… It’s what I dream about at night… Wading in a river somewhere, waiting for trout to rise.  That’s what I want to be doing in the spring, more than anything else.

Related ItemsDel BarberHockeyJuno CupJuno Cup JamManitobaManitoba MusicThe Puck Drops Here
← Previous Story On The Spot with Quote The Raven
Next Story → Countdown to CMAO 2016: On The Spot with Marshall Dane