Home / Promos / Petric Releases Their Newest Video “All She Wrote”

Petric Releases Their Newest Video “All She Wrote” 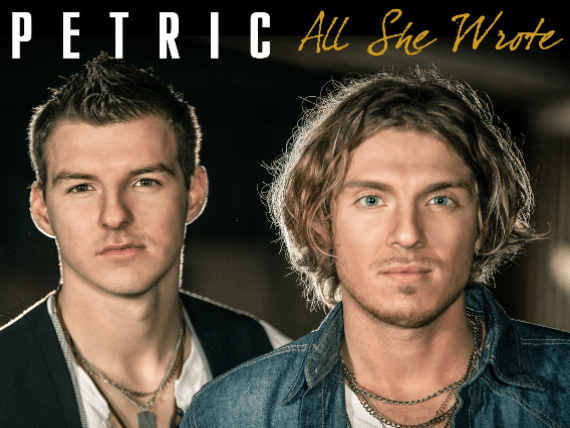 Winnipeg based and Manitoba Country Music Association’s (MCMA) 2015 Duo of the Year, Petric, recently released “All She Wrote,” their third single from their debut album It Girl. “This is one of our favourite songs off the EP. It goes over great live and since the EP release last October, we’ve received such a great response on this song from social media, fans, all of our friends and family. We’re really excited about “All She Wrote,” says Jason Petric.

The idea for the music video came from Tom Petric. He came up with the concept while watching the movie Gone Girl. “The words from the song and the vision for the video just seemed to fit after seeing this movie,” says Tom. Jason and Tom discussed the idea, presented it, and everyone from their label, SteelHead Music Inc., to Manitoba producer Chris Gaudry believed in their vision. With the financial support of FACTOR and Manitoba Film and Music, the team made this vision a reality.

The “All She Wrote” video was shot is many locations throughout Manitoba within a one-week time frame including Red River College in Winnipeg, rural Manitoba, a hotel, a real abandoned jail as well as Petric’s grandparents’ house. “We have a lot of support from our family and this is just one example of that,” comments Tom.

This song can be interpreted in many different ways. The video illustrates a story of a woman who in a bad situation empowers herself and as the lyrics say, “up and left, hit the road.”

This is a very compelling video and I believe you’ll want to download the song after watching it, so here are the links.

Watch “All She Wrote” at:
http://www.cmt.ca/artist/petric/video/petric-all-she-wrote, OR above via YouTube.