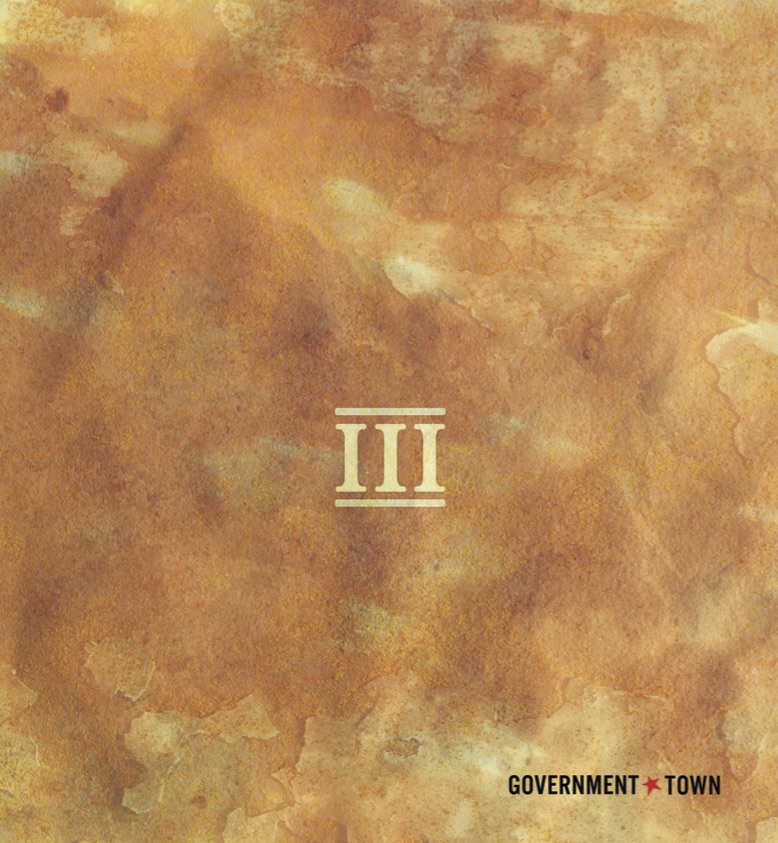 It takes a special record to transcend genre preferences.   A recording that, no matter what a listeners’ personal tastes, will be appreciated for the craftsmanship and expertise that the record embodies, one that should appear in any audiophile’s collection.  In simple terms, a dang good record.  Regina based Government Town’s new album, III, is simply that, a dang good record.

Many times a band shows its hand to eagerly, to show the audience who inspired them or, in some unfortunate cases, who they are attempting to copy.  Government Town has the musical courage to create something new, somehow subtly and overtly influenced consecutively, creating a distinct and memorable sound.

One of Saskatchewan’s biggest band (and bigger in Japan!), this down-home-art-house octet delivers a memorable musical experience, a fantastic starting point for new fans and strong continuation for continuing fans.

Government Town is firmly rooted in country, traditional and contemporary, with roots deeper than the giant Redwood trees you can drive your car though in Northern California.  On these country branches are hung elements of alternative rock, roots, twang and singer-songwriter sensibilities.

With all its country purity and alt rock sensibilities, “Home” has a solid, constant build, setting up the section for the ambient or driving bridge, or impressive three minute guitar solo with instrumental breaks.  As it builds, and the guitar solo is about to start, the song ends.  This is one of the few times I check the time counter of a song; 1:57.  Right when most bands would take extra time to prove their showmanship, the “let us show you how well we can play” route,  Government Town follows the punk rock format and ends their tune before the two minute mark.  They made their point and ready to move one.  It takes true courage to write short, concise and meaningful songs and Government Town has the musical maturity to know when a song should end, even when it could go longer!

Michael Harmel’s voice is a new take on an old sound, a country influenced voice fronting an alt. rock, country loving band.  The lead vocal lines have the phrasing of Counting Crows front-man Adam Duritz with the warm tone of Randy Travis, if he improved his range and, at times, was trying to sound like Hank Williams Jr. singing in a Hank William’s cover band, with a dash of Matt Good for good measure.  His purity of tone, and commitment to his style creates a stronghold for the musicians to rally behind who, when needed, transition between country and rock without the slightest sense of irony or ambiguity; they are creating a sound they truly love.

Instrumentally, each part is masterfully played and arranged.  As an eight piece band, Government Home does not over-arrange or over-play, each instrument works naturally with the rest.

“Lead On” and “The Other Side” are good driving rock tunes, with guitar double time guitar pushes and solid driving beats.  On the flip side, “Nightingale” and “Soldier in the Wind” are heartbreakingly beautiful while “Godforsaken Town” discusses the angst of self-discovery and finding ones place in the worlds.

“Took a Train” lyrically falls into a list of old-school country tropes; train riding, banjo playing, love buying, and family leaving.  From a band from Regina in 2016, this can feel fabricated and, in all honesty, pandering to the old school country audience.  How they are able pull off these ideas authentically, “in the old fashioned way”, is impressive, displaying their songwriting strength.

Listeners to “Took a Train” can feel the narrator’s plight, travel, and struggle.  Harkening back to the time of train riding and hitch, listeners are taken on a personal journey of discovery, as though this song was written during the period before Jack Kerouac’s On the Road, or when Bob Dylan travelled the US country side by train to write songs and learn first-hand of Americana (that isn’t true, by the way.  He went to the University of Minnesota, then dropped out after a year and moved to New York City.  Don’t believe the hype, ladies and gentlemen.)

“Diamonds” is the best tune Tom Petty and John Byrne never got around to writing and recording together.  Upbeat folk rock with sparling harmonies, “Diamonds” is a driving good time and a pleasant note to finish the record, just to hit repeat and start again.

Releasing three records between 2013-2016, Government Town is laying strong musical tracks for audiences to follow.  Jump an empty boxcar and hitch along for the ride.  The journey will be memorable.

Government Town’s III will be available on Spotify, Apple Music/iTunes, and other digital retailers/streaming services on Friday, May 20th.  Check out Government Town’s album release show on June 3rd at The Artful Dodger in Regina.