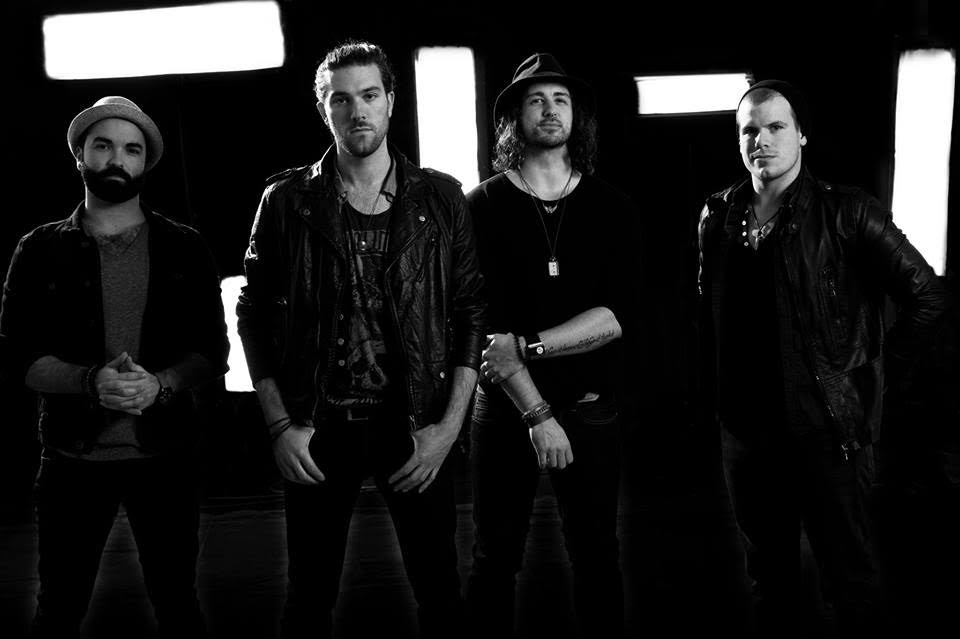 I recently had a chance to have a chat with Toronto, ON based band, The Modern Hearts via an email interview. The band is gearing up for a great show at Sneaky Dee’s in Toronto on May 26, and we want you all to know about it, and if you’re able, head on down! Canadian Beats hopes to be there too!

Hey everyone! We’re The Modern Hearts from Toronto.  There are four of us in the band:

How did you meet and form The Modern Hearts?

We come from all over Canada.  Gary and AJ grew up playing music together in Windsor, Ontario.  When they moved to London for school, Jay joined the mix from the Oshawa/Durham area along with a couple earlier members and formed The Brilliance, which was the first incarnation of the band.  Later In 2010, the band made the move to Toronto, lost a member, and very quickly met Steve who had moved to Toronto from Saskatchewan.  We recorded our album “Into the Wild” on our own, and when we finally released it in 2014, we made the decision to rebrand ourselves as The Modern Hearts.   There were a LOT of successes and bumps in the road throughout that time, but there’s not enough space on the page to tell it all!

You released your single, “Want You So Bad” last summer, how was the response from fans?

Fan response to our new material has been amazing. It’s awesome to hear that they can’t get your song out of their head for days, which tells us that we’re moving in the right direction with our sound.  With “Want You So Bad” we just wanted to build off of the sound of our first album, and give people something that was a little more fun, but still within our style.

You released a lyric video for the single, but no official video, why did you decide to go that route?

We played with the idea of creating an official video for a while, and even had some consults with directors and production companies.  But in the end, we had to really focus on what we wanted to gain from releasing the video.  Our music is very lyric driven, and we all love the lyric videos that we see other artists releasing.  They’re fun, creative, quick to create, and can really help people connect to your lyrics as they listen to the track.  With Much Music and MTV changing so much, traditional music videos don’t seem to carry as much weight as they used to.  That doesn’t mean we won’t make official videos in the future, but we just felt this was the right move for this single.

You won Big Music Fest’s Breaking Band competition in 2014, how did that feel?

It was a huge accomplishment for us, and it couldn’t have happened at a more perfect time.  It really brought our drive and motivation as a band to a new level.  We really wouldn’t be the same band that we are now without Breaking Bands.  It allowed us to meet a lot of people in the industry that we otherwise wouldn’t have had a chance to meet, and it really let us know that the right people were starting to pay attention.  There were also some pretty cool prizes that came along with it too!

You performed at Big Music Fest in Kitchener, Ontario last year, do you have any festival plans in the works for this summer?

Right now, we are really focusing on recording our new record, and unfortunately that doesn’t quite line up with a lot of the festivals that are currently happening.  But later on in the summer, you might be able to catch us at a festival or two!  We’re also planning to hit the road out East in the Fall which we’re really looking forward to.

You have a show coming up on May 26 at Sneaky Dee’s, if someone has yet to see you live, how would you explain your live show?

Well, we do tend to get really sweaty.  We put a ton of energy into our live shows, and our fans always have a lot of fun.  One thing we really focus on is making sure people get the same level of quality that they hear on our recordings.  There is nothing more disappointing than going to a live show and feeling like the band couldn’t keep up with their records.  We always promise that we will do everything we can to make sure that people leave our shows having one of the best nights they can remember… or possibly not remember?

Other than this show, when can fans catch you throughout the summer/ fall?

We’re super excited for our lineup of shows in Toronto over the next couple months, so there are lots of opportunities to catch us here in our home city.  But people can rest assured that we will be traveling around Ontario a bit to make sure that our fans get to see us before we head out on tour to the East coast in the Fall.

You have shared the stage with many great Canadian bands in the past, is there anyone in particular you’d like to work with in the future?

We’re all pretty big fans of The Arkells.  We’d love to play a hometown show with them because the place would just be full of so much energy.  The new stuff they’re putting out is really rad and we think they would be a pretty good fit for our sound.

What’s up next for The Modern Hearts?

We’re really excited to get this new record done and release it, so we’re working hard on that right now.  We’ve been so eager to get new material out there for people to hear. After that, the plan is to play as much as we possibly can.  It’s really kind of an addiction for us.  And we LOVE to tour, so keep your eyes open for us everywhere!

Well there is a TON of talent here in Canada, but like we said, we’ve always been really big fans of The Arkells, so we’re always looking forward to hearing new things from them.  That being said, we still listen to their album “Jackson Square” on the regular and “High Noon” was a really cool album.

We’re all really close in age, and coincidentally the first albums we all bought were somewhat the same.  They range from “Clumsy” by Our Lady Peace, “What’s The Story Morning Glory” by Oasis, “Bringing Down the Horse” by the Wallflowers, “Dookie” by Green Day, etc.

As for concerts, The Ataris and Our Lady Peace were two of them for sure.

First we’d probably want to crack open some beers on a deck. Then we might have to whip up a stuffed pineapple with some wild bore, bacon, sautéed spinach, roasted red pepper, and some sharp romano cheese.   Is that specific enough?  We all love food way too much, it’s amazing we’re not all 400 pounds.

Patio hopping!   There is nothing better than having beers on a patio on a super hot Toronto day.  That, and of course music festivals!  Playing AND attending them.

We have all talked at length about our days having Nerf wars when we were kids.  It’s amazing to see that Nerf just keeps making cooler and cooler toys as we get older.  It’s almost cool enough that we want to keep buying and playing with them now!  We’re all still really big kids at heart.   We also all grew up playing hockey, so we still have a passion for that too.  Sometimes it’s hard not to think Jay might be better suited as an NHL player.

Gary is one hell of a Riverdancer.  Enough said.

Thank you for allowing us to keep making music, and for always supporting us. Please never stop letting us know how our music affects you and what it means to you.  That really does mean the world to us.   It makes everything that we write and release so exciting for us, and we can’t wait for you to see what’s coming next.