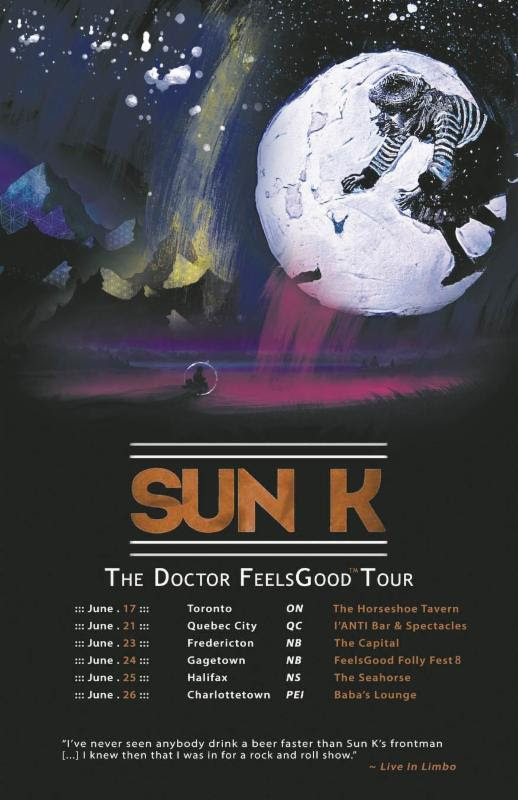 Sun K, a bluesy-folk-rock group from Toronto have announced The DoctorFeels Good Tour that will commence at NXNE on June 17th at The Horseshoe Tavern in Toronto.  The 8-location tour will reach locations in Quebec and the Maritimes, finally ending in Sudbury, ON on July 9th for the Northern Lights Festival Boreal.  Sun K is currently recording their sophomore album, in studio, with producer Cone McCaslin (Sum 41), which is a follow-up to their  critically acclaimed debut album, Northern Lies.
If you would like to help support the band’s new album, be sure to visit their PledgeMusic page for some fun ways to interact with the band, including whiskey tasting, BBQ dinners and ax throwing!
2016 Canadian Tour Dates:
June 17 – Toronto, ON – NXNE – The Horseshoe Tavern
June 21 – Quebec City, QC – l’anti
June 23 – Fredericton, NB – The Capital
June 24 – Gagetown, NB – Feel’s Good Folly Fest
June 25 – Halifax, NS – The Seahorse
June 26 – Charlottetown, PEI – Baba’s
June 11 – Kingston, ON – Fort Henry YGK Craft Beer
July 9 – Sudbury, ON – Northern Lights Festival Boreal
Connect with Sun K:
Website
Facebook
Twitter
YouTube
PledgeMusic