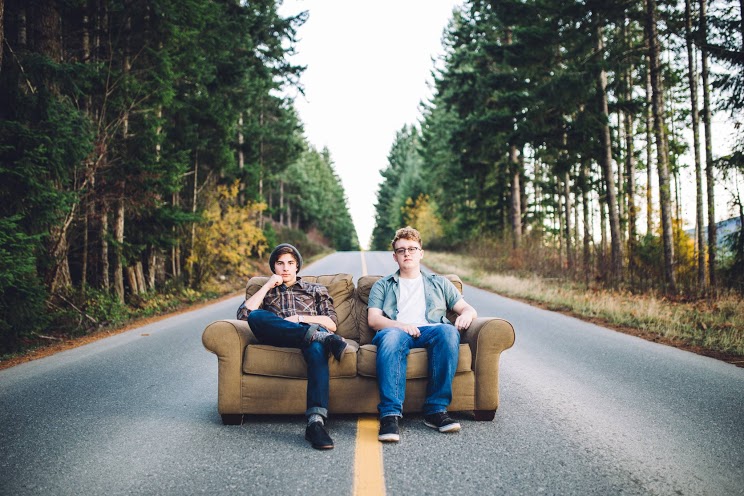 Nanaimo, BC based band, Maverick Cinema released their debut EP, Sanctuary on May 13, 2016, and are heading out on a few tour dates throughout British Columbia and Alberta (TBA), see the tour dates at the bottom of the interview. Here at Canadian Beats we are happy to share with you the live video for one of my favourite tracks off of Sanctuary, “Old Oaks and Pine Trees”:

Hey everyone, my name is Marshal Dillabough from Maverick Cinema.

How did you meet and form Maverick Cinema?

It all kind of took off when Cam Harper our drummer, and I reconnected after graduating high school. He has played drums for years, and I had just recently picked up guitar. It was more of a hobby for me really, I had written a ton of songs of my own but never really knew what to do with them. Cam mentioned that we should jam sometime and I was all over it! We got together one hot summer day, about three fans were blowing air everywhere, the mic stand was way too small for me, and we played a couple Bahamas tunes. It was really a lot of fun, and things really clicked with us musically. After a few months of playing in other projects, and jamming together we had the idea to start something fresh all on our own. We kind of had a folk Black Keys thing in mind I think, though that isn’t really what we ended up sounding like. For almost a year it was just the two of us, me on guitar, and him on drums. After recording our EP however, we recruited some other fine folks and before we knew it we were a full band!

You just released your EP, Sanctuary, what can you tell us about the writing process behind the EP?

Sanctuary is about a certain crossroads in my life. It’s about being so used to something, and the struggle to adjust after it’s gone. I love books, and albums that tell a story, and it was very important to me that this story had a solid beginning, middle, and end kind of vibe. Three of the songs “Wastelands”, “Roar of a Voiceless Lion”, and “Old Oaks and Pine Trees” were written before we knew we were making an EP, and it was obvious to us at the time that none of these songs spoke Exposition, or resolution. So I sat down, and tried a few things out. “Beyond The West” was tricky because I had about 5 versions of the song each with different lyrics. Cam, and I spent hours figuring out the structure, and how to make it feel like that one song people are gonna want to dance to. It was really when I started strumming the chords to “Morrell” for the first time that I knew how important these songs were to me. That song in particular has my heart on a platter for everyone to see. It’s the most emotional song for me that I’ve written, because it reminds me that even though my whole world came crumbling down, I chose to pick up the pieces and make something new, and beautiful with it.

How has the fan response been so far?

It has been absolutely amazing. Everyone is sharing it around, listening to it, telling their friends, and family to listen to it. I feel overwhelmed at how positive the response is. I mean it feels really good to put something out into the world people seem to enjoy, and ask questions about. I feel very blessed about it all.

You worked with Mike Edel and Colin Stewart on the EP, how was that experience?

They are both wonderful people. Mike has been an amazing friend, and mentor through this whole process. He contributed so much to the songs and took them places I never thought they could go. Colin is such a humble dude, I have to admit Colin Stewart had always been a huge favorite of mine, so when Mike mentioned he was down to mix the EP I literally did a happy dance. Meeting him was kind of like meeting a celebrity for me, I was very nervous. I soon found out he is probably the most relaxed, down to earth kinda guy, and his wife makes the best Kale smoothie you’ll ever have.

Is there anyone you’d love to work with the future?

Honestly I would love to work with both of those great dudes again it was such an amazing experience for us! Though if there is anyone in this world that I fantasize making music with it is Justin Vernon of Bon Iver. That mann is my hero.

What can you tell us about the live video for “Old Oaks and Pine Trees”?

It was the most fast paced, crazy thing we’ve done so far I think. We got Infiniti Studios In Victoria for the day, but our video guy Wes Holmes, and our bassist Matt Lineker who also edited the video, only had about a 4 hour time frame to go up to Vic from Nanaimo, film, and play the song, and get home. Mike was kind enough to fill in on the electric guitar due to our regular guitarist not being able to make it, so he also learnt the parts on the spot. In the end I think it turned out great, and I’m stoked to hear what people think!

You have some upcoming tour dates in June and July, how would you explain your live show to someone who has yet to see one?

It’s like watching an action movie. We start off exciting, give you a bit of relax time, and then bring the house down! We are an indie-folk band, but make no mistake, there is a lot of dancing, head banging, and jumping on and off of things.

What’s up next for Maverick Cinema?

After the tour I think we will start thinking about the future. I’d love to start working on demos for new tunes, and think about doing another EP, or full album! I was even thinking of trying out a quieter, more acoustic tour of shows, get someone on a cello, we’ll see.

I love Dan Mangan, that guy brings something new to the table every time while still holding his sound,  it’s something I really look up to. Also City and Colour’s new album is fire.

The first concert I ever attended wasn’t honestly that long ago. It was about 3 years ago when I saw City and Colour with Half Moon Run at Deer Lake Park in Burnaby, and it changed my life. Ever since then music has been my passion. As for my first album I believe it was Linkin Park’s Minutes to midnight way back in the day. I went through that phase, it’s still something I can listen to and enjoy though.

Pancakes, but know you will never have a breakfast that lives up to it ever again.

I love surfing, and hiking! The trees brings out the best in me.

Pokemon Gold for my Gameboy advanced. It was the first video game I ever owned, and it still remains one of my most prized possessions to this day.

I never finish the crust on any sandwich.

I just want to say thank you so much for all of the kind words about Sanctuary, and for following us as far as we’ve come. It’s because of you we do what we do, and expect more exciting things soon!