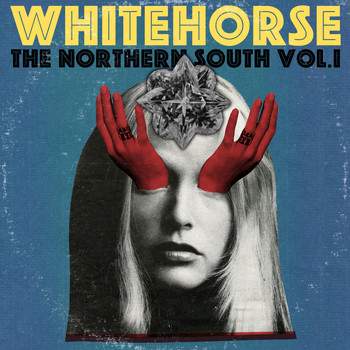 Whitehorse have recently released The Northern South, an EP that takes the classic soul and twang of 1950s blues standards and turns them on their head, adding their own distinct flare to every number. The six track EP takes the listener through a journey into a different era, paying homage to artists like Jimmy Reed and Willie Dixon. Staying as authentic as possible, the instruments used on the EP are all 1950s originals or reproductions. The result is an undeniably raw, gritty set of songs that take Whitehorse back to their roots and showcases their identities as musicians.

The first track, “My Babe” was written by Willie Dixon and originally performed by Little Walter in 1955. The song begins with nothing but a basic beat as its skeleton, and steadily builds as more layers are added to create the rich texture that one expects from a classic blues tune. A commanding riff slowly makes its way into the music to tie it together as Melissa and Luke sing about a no-nonsense romance. A guitar solo breaks up the verses to add some flare in between sections. As it was introduced in 1949, Luke plays a Marine Band Hohner blues harp through a Shure Green Bullet microphone, which subtly makes its appearance throughout the song to make it that much more authentic.

The EP then moves into “Wang Dang Doodle” which is another classic written by Willie Dixon and originally performed by Howlin’ Wolf circa 1960. Throughout this song, the duo sing with a carefree attitude while telling a story through breathy vocals and a seemingly effortless ease. A subtle three-note melody chimes in on the piano and acts as an anchor that re-appears throughout the song. An instrumental interlude bursts through the music for an electric guitar solo before bringing it back to the steady vocal line.

“Big Boss Man” follows after and takes it down a notch. Originally written by Luther Diction and Al Reed in 1960, this number follows the classic form one would expect from a blues number. To keep it authentic, Melissa plays a 1952 Martin 00-17 and Luke plays the Harmony Stella. A walking riff introduces the song as the duo sing a story that evokes the working woes of the era. Throughout the song the attention is placed on the lyrics and vocal flare as the instruments take a quiet step back.

Whitehorse add their own style to Chuck Berry’s 1963 number “Nadine” as they highlight the juxtaposition between old and new forms of music. Digging up the most digital sounding drum possible, Whitehorse use a Roland 808 drum pad in this song to effectively mix timelines and genres into something that is uniquely modern while remaining true to its roots.

Contrastingly, “Pretty Thing” has its grounding in the classic blues and grassroots themes that most of the EP draws upon. Written by Willie Dixon and performed by Bo Diddley in 1955, Whitehorse stays true to its classic style. Although the tune is repetitive, it remains captivating and leaves the listener singing along to the melody by the end of the song.

The final track from the EP “Come On In My Kitchen” is a lengthy masterpiece that ties the whole EP together, mixing the flare and attitude of blues lines with more modern psychedelic elements. Originally written and performed by Robert Johnson in 1937, Whitehorse infuses the number with the soul and creativity that it demands. While the tune slowly lulls by at a moderate pace, the duo pick up the tempo to play with the energy that Whitehorse fans have come to know and love.