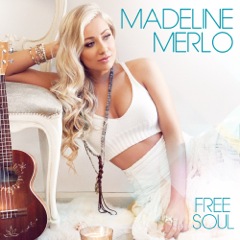 Madeline Merlo who was born and raised in Maple Ridge, British Columbia, is a Canadian singer-songwriter to be reckoned with. She was discovered by Vancouver writer / producer Dan Swinimer at age 17 and has worked hard to get herself where she is today. Merlo is more than just a country or pop artist; she is a powerhouse in this industry and the current big names like Jess Moskaluke and Kira Isabella have some serious competition on the hands. 2015 was a big year for Merlo. She garnered nominations for and won the Canadian Country Music Association’s Rising Star award and the BC Country Music Association’s Female Vocalist of the Year. In essence, this young talent can sing!

Free Soul is Merlo’s debut album and has been over two years in the making. It has a complement of 11 songs with four previously released singles. It’s so refreshing to have a full-length CD to listen to as most artists now release seven song EPs. There is just so much energy, so much soul on Free Soul. There are songs that make you want to stamp your feet, make you want to dance, make you want to close your eyes and sway to the beat or just make you want to sing along.

There are four songs that you’ll recognize. “Sinking Like a Stone” (Merlo’s debut single) and “Alive” were her first two releases in 2014. “Alive” is the song that brings you back to a time when you realized why you want to follow Merlo in the first place. 2015’s release of “Honey Jack” became such a big hit across Canada that Merlo was asked to be the opener for some of Dean Brody’s and Paul Brandt’s The Road Trip Tour in 2015. Her current single, “Whatcha Wanna Do About It” (released January 22, 2016) is presently a Top Ten on the Canadian country music charts. These songs that you already know do make you want to listen to the other seven on this album.

My favourite song on this CD is Merlo’s ballad “Ready to Say Goodnight” featuring another Canadian country music favourite, Tim Hicks. Merlo has a sweet-sounding voice and when accompanied by Hick’s natural country rock voice this is a song that moves your soul. Their voices meld together perfectly.

“War Paint” is also one song that you want to play over and over again. Its rhythm cannot be denied. This could be your go to song to make you feel empowered.

I can see “Over and Over” becoming Merlo’s next single released. It’s all about breaking up but getting back together. It’s about a love that doesn’t want to end even though it should. It’s a classic in the making.

Free Soul is extremely well written and well produced – from the first song to the last. This is one album where it will be hard to pick just one favourite so I believe that you need to check it out and add it to your playlist.