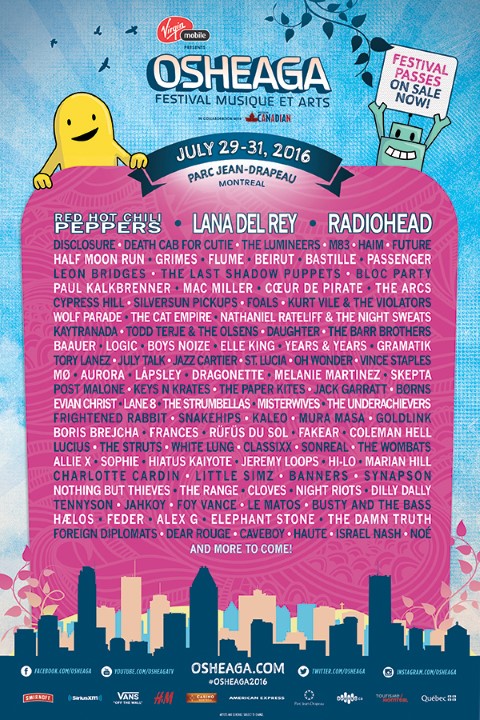 Hosted each year in the scenic expanse of Montreal’s Parc Jean-Drapeau, Osheaga is undeniably the king of the Canadian music festival. Having consistently brought in a world class line up since its inception in 2006 the 11th year once again raises the bar. Along with huge international names such as Red Hot Chili Peppers, Radiohead and Lana Del Rey the schedule is also chalk full of plenty of homegrown Canadian talent that is not to be missed.

Canadian Beats wants to make sure you don’t miss any of the best this country offers so here is our list of the top 5 Canadian performances to check out at Osheaga 2016. It of course goes without saying that the big names in Canadian music on the bill will pull in plenty of fans so excluded from this list are the likes of Grimes, Keys & Krates, Half Moon Run, Wolf Parade, The Strumbellas, July Talk, Couer de Pirate, Dear Rouge and Coleman Hell. You will of course want to check out all these amazing artists as well but make sure you don’t miss these great acts you may not have heard of.

Passes for Osheaga can be purchased at http://www.osheaga.com/tickets.

Vancouver punk quartet White Lung combine raw guitar riffs, hard hitting drums and singer Mish Way’s gritty vocals for a sound that will have anyone who is even remotely a fan of punk heading to the mosh pit.

For those looking for some straight up rock Montreal’s The Damn Truth should be top of your list for sets to check out. No BS, no gimmicks just pure, unadulterated old school rock n roll.  Vocalist Lee-La Baum will have you thinking she’s channeling Janis Joplin during the bands intense live show and guitarist Tom Schemer can hold his own with some of the greats.

With a stage show and persona that can best be described as performance art it could be very easy to pass over Allie X as nothing more than gimmick, in doing so you would however be doing yourself a great disservice. This Oakville, Ontario born synthpop diva pairs an incredible vocal range with clever lyrics and infections synth for a sound that will win over even the most adamant detractors of electronic music.

Jazz Cartier can best be described as Toronto’s answer to Kendrick Lamar. The first of the post Drake rappers to start gaining real traction this emerging artist offers a grittier, less sunny glimpse into life in the Six. The lyrical sophistication displayed by this guy far surpasses many of his contemporaries and his live show will keep you captivated.

Surprising no one more than myself the top entry on this list is a second rapper. Reminiscent of old school, Slim Shady era, Eminem Vancouver’s SonReal is top of the list for the must see acts. The Juno multiple Juno nominee’s high energy, tight rhymes and irresistible beats will have you dancing whether you want to or not.