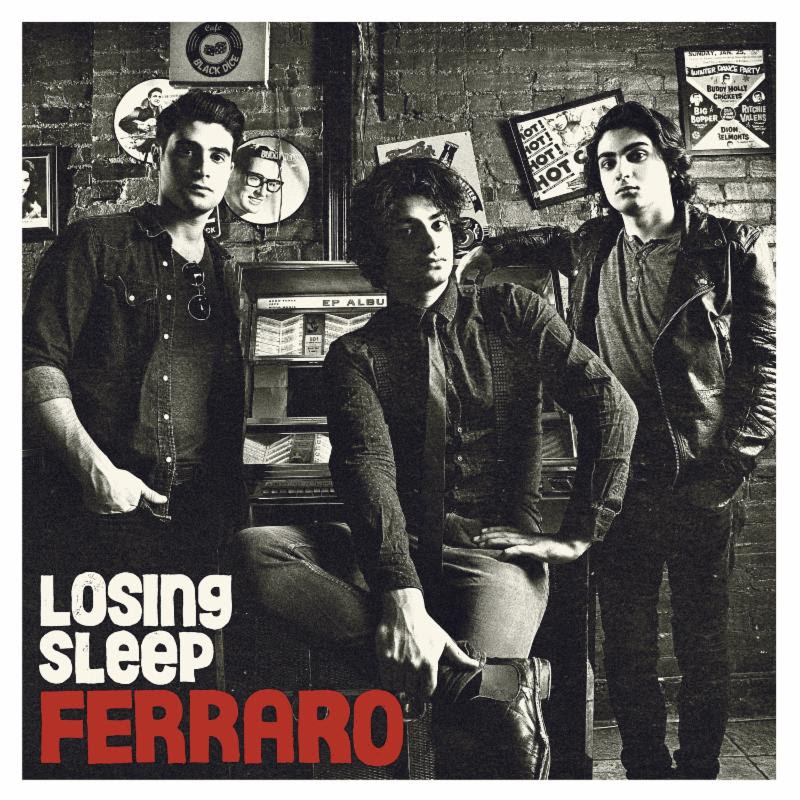 Toronto based Ferraro could have been started by all the Strokes’ younger siblings, if they went through their respective family record collections during sleepovers, and discovered all their parents’ bands cut 45s in the ‘50s.  A multi-genre influenced record, Losing Sleep combines tight hooks, catchy vocals and sassy guitars for an impressive first album.

Cosmo (guitar/vocals), Tally (bass/vocals) and Gianni Ferarro (drums/vocals) themselves are a family band, three brothers who are descendants of Toronto’s scene-defining The Cameron House, a room synonymous as the place to be seen and to discover new music.   Growing up observing countless live shows, and hearing bands’ shared stories, it is understandable Ferraro’s diverse influences and musical adaptability.

The opening track, “My Girl (For you)”, is reminiscent of the Libertines, and the afore mentioned Strokes’ siblings, starting a Ronettes cover band complete with soulful horn lines and amazing “Everyday” Buddy Holly bells.  Their sound is a combination of classic do wop and ‘50s rock (real live hand claps!) with a modern edge, the street swagger of New York alternative with the purity of the roots of rock ‘n roll.

The do wop and classic rock ‘n roll influences, which carry over into “Shake It Off” and “Those Days”, are refreshingly authentic and natural not an ironic gesture or inside joke between the band and their fans.  “Shake It Off’ – fortunately not a Tyler Swift cover – is a wonderful head shaking dance tune.  In a perfect world, Ferraro would do the soundtrack for a present day Dirty Dancing reboot and Tom Hanks would be their manager.

Engineered and mixed by Guillermo Subauste, produced by Ferraro and Don Kerr, and mastered by Joao Carvalho, the blended vibe of vintage and modern is seamless and refreshing with clear, crisp production.

The various influences include straight ahead country rock, such as in “My Head, My Head” and “On the Road”.   Never afraid to swap styles, “My Head, Head” starts off as an upbeat country rock tune, with a half tempo rapped verse, until the breakdown complete with Shangi La inspired background vocals, bari sax and trumpet.  This is Blue Rodeo, Corb Lund, Northern Pikes and your best friend from high school driving along the vast prairie highways.

“On the Ropes’ is a big rock ‘n roll ballad with swing and strut, a heartbroken, bloody knuckled John Lennon on a spotlighted stage playing with Sloan as his back-up band and a guest appearance by Brian Setzer Orchestra.  The song closes as a mix of dirty Beatles, polite Aerosmith, and a wandering Dion.

“Old Hollywood” highlights the band’s multi-genre approach to song arranging.  Starting with a surf ballad introduction, it melds into a country-vibe rock ballad ending with trumpets and layered vocal harmonies.  Lyrically it hits all the right images of longed-for lost love and lonely memories, sorrowful goodbyes and sad well-wishes.

The title track “Losing Sleep” in itself is a microcosm of the band’s sound; straight ahead rock, alternative country vocal phrasing, catchy as hell.

So many guest horn lines on this album….thank you!

The album closes with “Coffee and Smokes” which has a Door’s “Peace Frog” influence, if Jim Morrison was in a good mood playing with Luke Doucette in a well-lit country bar in Austin, Texas.  “Coffee and Smokes” is their closing sing-along anthem, a breezy version of “Roadhouse Blues” complete with day-old coffee breathe, cigarette stained fingers and beer soaked convertible car seats.

A mix of do wop, rock and roll, country and street smarts, Ferraro’s Losing Sleep is a catchy, enjoyable, neo-nostalgia record from start to finish, reviving the roots of American music.