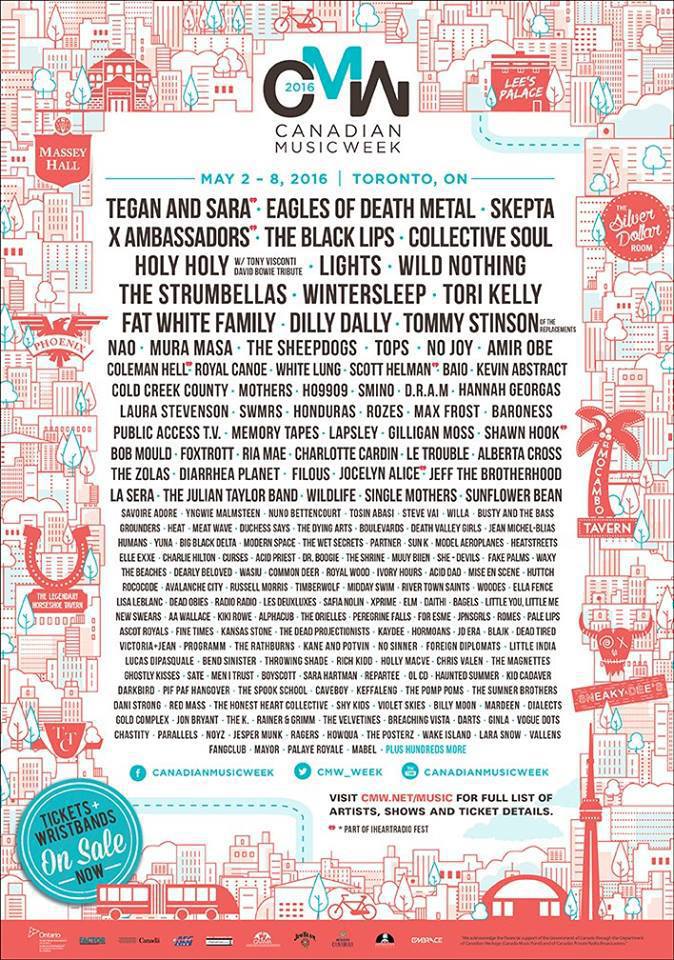 With Canadian Music Week literally just around the corner it’s time for some last minute decision making to be done. Seven days of artist showcases and events makes for a busy week and nobody can take in everything but here are some highlights Canadian music lovers won’t want to miss over the week.

Those lucky enough to have tickets to the sold out 16th annual Indie Awards presented in conjunction with Toronto’s Indie88 radio station are in for a treat. Taking place Wednesday, May 4th at The Phoenix Concert Theatre the event will feature performances by some of the biggest names in the Canadian indie scene including The Strumbellas, Wintersleep and The Zolas. Those without tickets can still participate by casting their vote for the winners at http://indies.ca/voting.

Kingston, Ontario natives Lost Cousins made some big waves last year when they took to the Way Bold stage at Wayhome Music & Arts festival and have been steadily building a fan base ever since.  The quartet’s unique fusion of indie rock and ambient synth pop sounds is something best heard in a live setting. Add in the fact that these lads know how to put on an entertaining, Interactive show and it’s a must see. Catch them at The Silver Dollar Room on Tuesday, May 3rd.

London Is On Showcase

Friday, May 6th UG3 is all London all night! Spanning genres from electronic to folk, rock to country, pop to blues there is something for everyone. Featured artists include Taylor Holden, Wolf Saga, Julia Haggarty, Texas King, Hiroshima Hearts and Mountain of Wolves.

Any fans of indie pop/rock in the vein of Arkells, Wolf Parade or Kings of Leon will not want to miss Lindsay, Ontario natives The Kents set at The Dakota Tavern at 11pm Saturday, May 7th.  With their newest single “The Stakes” debuting on The Strombo Show and picking up radio play on a variety of radio stations, coupled with energetic live performances this foursome is an act to keep your eyes on.

If you’re looking for a more relaxed laid back vibe then indie folk songstress Annie Sumi is the way to go and with 3 separate showcases during the week she will be hard to miss. Annie’s soulful vocals and delicate guitar playing combine for a haunting sound that reveals and old soul in this young lady from North Bay, Ontario. You can catch her Monday, May 2nd at 10pm at The Paddock, Tuesday, May 3rd at 8pm C’est What or  on Thursday, May 5th at 2am at Cherry Cola’s.

Tickets for all events can be purchased at https://cmw.net/music/tickets.