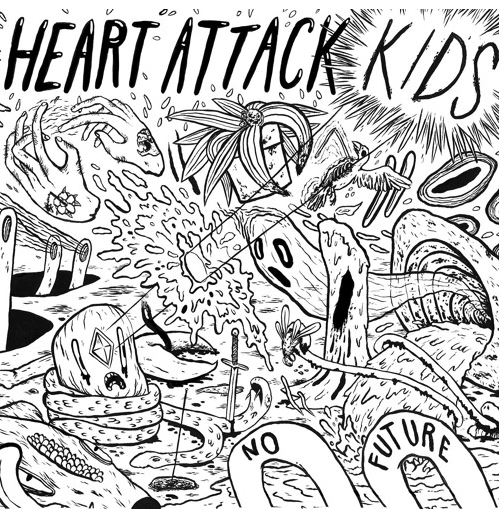 London, Ontario duo, Heart Attack Kids, look to bring hard hitting rock back to punk with the release of their second record, No Future  on May 6th, 2016, through the independent label, Underground Operations.

The drums at the start of the opening track, “Deaf Dogs”, start off slow, building momentum, getting faster every few beats until they reach their fullest force, along with a distorted guitar and a heavy riff, followed shortly by aggressive vocals.  “Deaf Dogs”, along with its gritty music video, is an excellent introduction to the freight train that is Heart Attack Kids; a band that you’d never believe to be a duo due to the sheer unrelenting amount of power their sound has.  Songs like “Eh Ok”, “Blow Up Dolls And Cannonballs”, “Scatterbrain”, and “Platonic Love Bomb” stand out among an already exception track list of thrashing, hazy, and hard hitting bangers.

Heart Attack Kids prove that they have more than what it’s worth to make punk rock great again.  No Future strays from the accepted norms of the pop punk scene and searches for inspiration among the 90’s alternative rock scene from bands like Nirvana and the Smashing Pumpkins.  Influences from punk icons of the likes of The Stooges and The Germs are also quite apparent, giving the band a very unique sound among today’s musical climate.  No Future is an explosive barrage of fuzz, riffs, and pure bombast, reminiscent of the raw energy of the 1970’s LA punk scene with a nod to the grunge aesthetic of the 90’s, giving Heart Attack Kids a modern, alternative edge which simply must be heard by any and all hard rockers and punks.