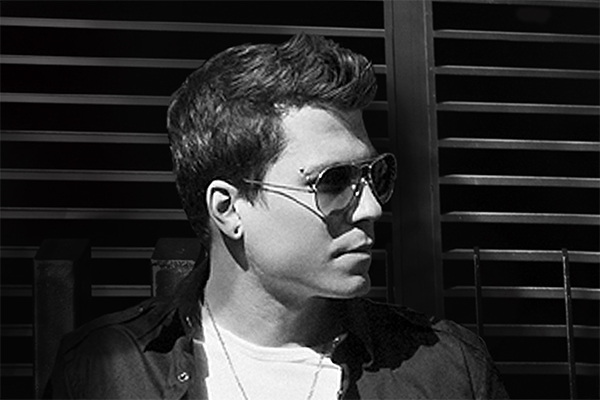 I recently had a chance to ask Montreal, QC based singer/songwriter a series of questions. The questions are designed to help you learn more about his background, music and so much more!

Of course! My name is Bobby John. I’m a singer / songwriter from Montreal signed to Bloc Notes Music Publishing and Mungo Park Records. I’ve co-written songs with artists and producers from across the country and in Europe including singles for Serena Ryder, Eva Avila and Olivier Dion. Most recently, I’ve had my debut single, “Strong” playing across radio stations in Quebec and I’m currently in studio pretty much all the time writing / recording for my debut album which we’re lining up to release later this year.

Since I was in fifth grade and got my first Nirvana album and acoustic guitar for Christmas. Haven’t put a guitar down since J

You recently released your debut EP, Strong. How has the response been?

Amazing in my opinion, lol. We originally recorded it to help get a team around the project but when the debut single “Strong” started getting momentum online and on radio, people were asking for more so we put it out. The feedback has been overwhelmingly positive. So grateful.

What can you tell us about the writing process behind Strong?

I was in a heavy week of writing for my publisher and a few artists. I got news about a friend who was going through an insanely rough time that seemed to never end. The whole saying of “When it rains, it pours”, picture she was in the middle of a freaken hurricane. I put the other songs aside, opened up a new audio project on Cubase, put in a piano plugin and just wrote and recorded the first demo of “Strong” that afternoon. I wanted to write something to inspire her not to let all this uncontrollable crap get her down, and really just remind her that she was “Strong” and so much more. This was a little while ago now. I’m happy to say that things are now much more positive J

Your debut single is actually the title track from your EP, and it claimed the “Success of the Week” on the Palmares Charts, and remained no the chart for 30 weeks, how did that feel?

I was really not expecting it. Don’t think anyone in the team was. We were a small independent team launching an unknown English artist in Quebec with a single song we were able to properly produce with the help of a FACTOR demo grant… Could have been worse but was far from easy, lol, but I am extremely lucky to have guys like Eric Collard (producer) and Diane Pinet (publisher) who are as nuts as me with a blend of hustler and crazy who were able to take what we had, launch a single to radio, have major stations like Rythme FM take a shot on us (which we are forever grateful for), followed by an insane amount of local support from new friends and fans that kept requesting the track and kept us on the charts for 30 weeks. Still feels surreal. I can’t thank each and every one who has supported the project so far enough… You guys rock!!

You also released a video for the single, what was the highlight of the video shoot?

The team. The actress in the video is the person that the song was originally inspired by. Overseeing the project was my long time friend, producer of the EP, Eric Collard who’s had my back in music forever. We shot a large part of the scenes at my publisher, Diane Pinet’s home and she was cool with us bringing in car tires and broken pieces of doors and all kinds of stuff most people would have never allowed. I may or may not have scratched one of her walls when moving some camera equipment but don’t tell her, lol. The general vibe was a team having fun, bringing creative ideas to life with what we had to work with and the end result is more than we could have ever asked for thanks to guys like Vincent Gauvin and Francis Cloutier who put it all together.

You are working on new music and songwriting collaborations for your debut album, which is scheduled to be released later this year, does your EP give any hints as to what to expect from your full length?

I’m a big fan of collaborations. Song wise, I’ll be bringing in a few other awesome co-writers in like Murray Daigle, Lora Ryan and others who I’ve been writing with for years for complementing flavors in some new tracks. We’ll for sure be following the same core when putting any music out. Songs are from an honest place, we sweat the details, no filler so very much as we have done with the EP, just way more of it J

In your career, you have worked with some very well-known people in the industry, such as Jeff Diesel (Alyssa Reid, Fefe Dobson), Mike Kiofos (Faber Drive) and Murray Daigle (Neverest), how were these experiences?

First time in a room with each of these guys, I had no idea who they were or what they’ve done, lol. It was probably best cause if we got talking at the start of the day, I might have been shaking a little cause I didn’t have very much to say as one of the newer guys on the block, hehe. I’m a topliner (lyrics / melody) and am confident in handling myself in a room. These guys are producers and are the best at what they do. Working with each one were all easy days. Everyone did their part and we had a song we were aiming for at the end of the day. These guys just end up blowing your mind every dam time which makes me sick, hehe, so working with them is always humbling and inspires to push yourself even more. First song I wrote with Murray along with an additional co-writer, Jasmine Denham, ended up being the theme song to the 2015 PanAm games sung by Serena Ryder so we figured there was a good chemistry there for sure. Since then, we must have wrote +50 songs together and are still writing a bunch together so they are relationships that kept going in all cases in some shape or form.

Is there anyone in specific that you’d like to work with the future?

Max Martin as an obvious first, but aside from that, no specific names. I want to work with people that want to work and want the best songs at the end of the day. Though SIA is high up on my dream list as well just for that powerhouse voice and insane songwriting skills in my opinion.

Can fans catch you at any shows this summer?

Working on a schedule now so be sure to follow me on Facebook (/BobbyJohnsPage) or check out my website (http://www.bobbyjohnspage.com) in the next little bit for dates!

Writing / performing / repeat. The immediate goal is to launch a follow up single in the coming weeks while continuing to write for the album, pre produce tracks as we go and start hitting the stage to test a lot of the material so expect many dates soon!

Before considering myself as a singer/songwriter, I was in rock bands all my life so a lot of my Canadian favorites are rock bands. Still in my top are guys like Marianas Trench, Hedley, The Tea Party, Three Days Grace, Nickelback and Billy Talent. There’s just so many though. Maybe it’s the cold up here and everyone hibernates to write some good music, hehe, but Canada has been, and I’m confident always will be packed with some of the greatest talent.

What was the first album you ever bought and the first concert you attended?

First albums – Offspring – Smash and Green Day – Dookie. First concert was the Offspring in Montreal with my then fellow rock band mates and still very good friends, Daniel and Jesse and holy crap, it was amazing!

‘Elastic Heart’ by SIA a few days ago and it slowly transitioned somehow to both Fallout Boy ft. Demi Lovato – Irresistible , and Disturbed’s cover of ‘The Sound of Silence’ by Simon & Garfunkel. It switches up every few days so I’m on the verge I’m sure of moving on to the next repeatable gem J

What is your favourite outdoor activity during the summer months?

I used to be very much into sports as a kid but with music, the joys of summer became jamming with the garage door open a little to get some air in until the neighbors complained, hehe. Now a days, I’m a tad of a workaholic so I’m in the studio most of the week. Favorite summer activity is heading out for a walk to clear the mind a bit and take a break without having to put a winter coat on, lol.

I almost drowned in Hawaii on my honeymoon. I’m a horrible swimmer to begin with. I was with my wife and she wanted to snorkel far enough to see turtles (which we never ended up seeing) but the current grabbed us. Long story short, was easy to go out and away from the shore but questionably realistic to get back with a few minutes of panic in there that was enough to get me to re-evaluate what a real life obstacle is. I was pretty relaxed in life before that point but afterwards, I’m not sure I have since been in a situation that phased me very much. I now also have mixed feelings about turtles.

Thanks for supporting music and taking a read into a little more about what I’m doing. Don’t forget to follow Canadian Beats cause they obviously have fantastic taste in music, lol, but really, huge thanks to them and to you! Stay tuned for a heck of a lot of music goodness coming your way so if you aren’t already, be sure to follow me on Instagram (@BobbyJohnsInsta), Twitter (@BobbyJohnTweets) and Facebook!