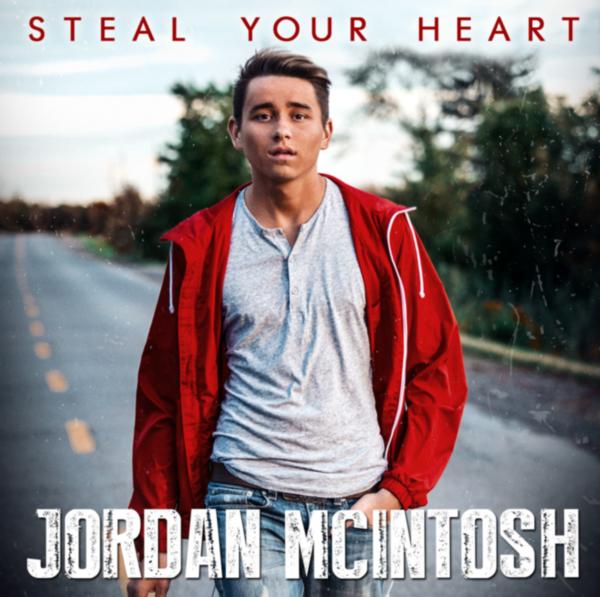 Jordan McIntosh, a country artist from Carleton Place, ON is releasing his debut album, Steal Your Heart today, after two years of extensive touring and recording.  Although his album is just being released now, he is no stranger to the Canadian country music scene.  His singles, “Grew Up in a Country Song”, “That Girl” and “All About a Girl” have earned him recognition across the country.  McIntosh has also already toured across Canada with country music legends, Brett Kissel and George Canyon.  Canadian Beats caught up with him for an interview last October as he made a stop in Barrie, ON with Kissel on the Airwaves tour.  It was obvious that this young musician was destined for stardom even then.  You can catch up on this fun interview here.

McIntosh digs deep, emotionally, for this album and explores the highlights and challenges of adolescence through his lyrics.  From start to finish, Steal Your Heart shines brightly.  The title track, “Steal Your Heart”, is no exception.  Opening with the classic whimsy of a banjo plucking and pairing with his smooth vocals, this track is an absolutely delectable way to be introduced to the album.  I found myself thinking that McIntosh was drawing inspiration from bands like Florida Georgia Line and The Cadillac Three.  “Steal Your Heart” also features clever lyrics that seem to have double meaning; with McIntosh stealing the heart of his love and as a small town man stealing the heart of his fans.

“Sunroof” is a track with a similar feel to it that I can picture McIntosh singing on the large outdoor stages of the upcoming summer festivals.  He has already been confirmed at this year’s Boots and Hearts Music Festival at Burl’s Creek and this song has all the right vibes to become one of those memorable summer anthems that country music is so good at producing.

A highlight on the album for me is the track “Story of My Life”, featuring George Canyon.  Having seen this song performed live, I am instantly reminded of the haunting drum rhythms that sound as if they are signaling the call for battle.

The twelve tracks on Steal My Heart are all equally enjoyable to listen to, giving this album the ability to be savored right from the opening bar to the last note.  With the weather warming up, Steal My Heart is the perfect choice for a clear night on the patio, or the dock, or just about anywhere you are in the mood for a feel-good country music experience.  Get yourself a copy today!