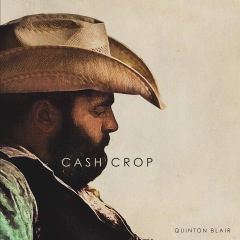 Quinton Blair is authentic. Quinton Blair is an exceedingly incomparable country  / roots / folk artist. Quinton Blair is Manitoba Country Music Association’s (MCMA) 2015 Roots Artist of the Year and has just released his third album Cash Crop. This EP features four full-length tracks; tracks that are familiar with anyone who follows Blair. He has been performing “Eye of the Storm” live for the past year and “300,000 KM” for the past six months.

Blair produced Cash Crop with award-winning producer Murray Pulver (of Doc Walker fame) along with engineer Paul Yee. He was also joined in the studio by an all-star cast of Winnipeg’s finest country music artists. Quinton Blair considers himself just a folk singer that sees what’s going on around him and puts it in a song. This artist takes his latest album where few dare to tread and he does it well. When one talks about taking more from the ground for profit, whether it’s mineral extraction or oil and gas, the title of this album says that – Cash Crop.

The first track “Following Him Around” was written by Quinton Blair, Blake Berglund and Del Barber the night after Blair won his MCMA award. It tells the story from both sides of the fence and could be considered controversial. Is it oil money making the world go round or is it the blue-collar folks who work so hard? It’s about the struggle that farmers (from beef to grain to dairy and more) face in today’s world. It’s about century farmers who have to sell off land to make ends meet but feel guilty doing so because of the hard work put into the farm by previous generations. I believe that this will be his number one song from this EP. I also believe that this song should be the theme song for FARM AID.

The second track “Eye of the Storm” has been out there for about a year and has a real upbeat feel to it even though it is about fighting one’s demon’s and getting by after heartbreak. A great listen!

The third track “300,000 KM” is my favourite by far. Although it about love and the real pain caused by that love after it’s gone, running from one’s past and not wanting to or to be able to let go of that past, there is something there that gives you hope.

The final track “Won’t Be Missing You” was written by Quinton Blair and Clayton Bellamy (of Road Hammers fame) and this one is different from the other tracks on this EP. If you like soul music, then you will love this one as it had elements of soul in it. It was originally written to sound like an Eric Church song but by the time the final tweaks were made, it has more of an Eagles sound to it. This one is about coping with heartbreak and the loss of a loved one either through a break up or death. It is about what someone will do to keep away that hurt from missing someone, the lengths they will go to keep from missing that person.

If you are fan of an artist who is unique in their talent, an artist that can build a career outside the bubble of mainstream music, an artist that can play at a folk festival one weekend, a rodeo the next, feels comfortable opening for a major country music artist / band or performing at a local coffee house, then you will love the artist that is Quinton Blair and what he has to offer.

I highly suggest that you add Cash Crop to your playlist.