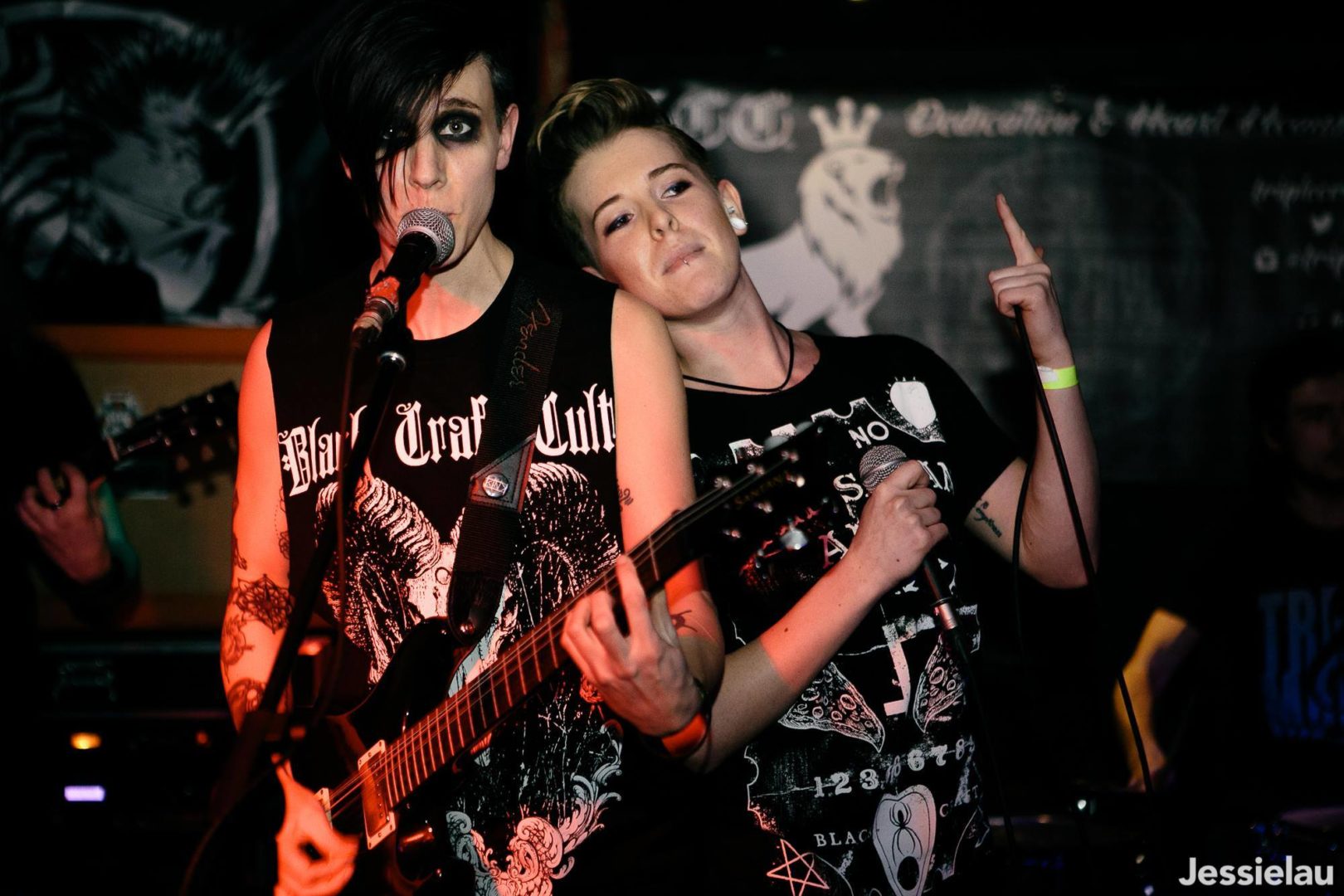 Some big news coming from Toronto, ON based duo, KINK. They are about to release an acoustic version of their debut EP, Fine Lines in May 2016. On top of this, the band will release a music video for the acoustic version of “Keep Me Away” in the coming week. I had the chance to ask them about these upcoming releases, and more!

First off, what have you been up to since the last time we chatted?

We have been keeping super busy! Our Guitars for Girls initiative is still running – we have given more guitars to girls in Toronto who are in need and are constantly receiving donations so if anyone has a guitar to give to a great cause, they should reach out to us! Aside from that, we played a super fun benefit concert for the Humane Society with our friends Red Handed Denial and we have been playing various shows around Ontario and Quebec – overall just having a blast. We launched an apparel company 3 months ago which has been crazy and awesome – we have shipped so many packages all around the world. Fans can check out our stuff at www.kinktheband.com and click on “BUY STUFF”! It doesn’t only feature band merch, but also things that we do wear that we designed ourselves.

We have also been getting some serious action in Brazil lately online – we did a mini-cover of a Tokio Hotel song that now has over 100,000 views on Facebook, and we have been getting onto Brazil’s largest radio station frequently for interviews and live performances, which has been SO cool.

You will be releasing an acoustic version of your previous release, Fine Lines in May, what made you decide to release it as an acoustic album?

We wanted to have an album that reflected the way we sound when we play acoustic shows – which we do a lot. Our fans have heard us play the acoustic versions of the songs they love frequently through Periscope when we broadcast live practices, so it was also largely due to fans requesting it. We also really wanted to demonstrate our songwriting at the core – we write all our songs on two acoustic guitars and then dress them up for the studio later. The acoustic album demonstrates the songs in their genuine form!

We decided to call the album “Fine Lines Acoustic…literally” because many of our favourite bands have released acoustic tracks that include many other instruments like percussion, bass and many vocal tracks. We wanted to point out that this album is literally us with two acoustic guitars!

What can you tell us about the recording process?

We had an amazing time at the studio in a more intimate setting than we did when we recorded our full band EP. We wanted to capture a sound and feeling on the acoustic EP like the listener was in the room with us. To do this, we recorded the guitar tracks at the same time, side by side, in a nice big beautiful space, and recorded vocals at the same time as well, but in different rooms. Because of this, we were able to really feed off each other and capture the true essence of KINK acoustic live performances.

You worked with Juno award winner producer/engineer, Siegfried Meier, how was that experience?

Siegfried was amazing – he really pushes us to perform at our best by allowing us to feel comfortable. He has a beautiful studio called Beach Road Studios on Lake Huron, on an amazing property. Bands who record there get to sleep over and really just indulge in the recording process. It makes the whole experience unforgettable.

You will be releasing a music video for the acoustic version of “Keep Me Away” this month, care to  tell us a bit about making the video? What was the highlight of the video shoot?

The video was shot at Beach Road Studios during our recording process so it gives our fans a glimpse into what the 2 days were like for us behind-the-scenes. We had our friend Tim McCready film, and Dani is editing it right now so it should be out within the next week. It was great having just us, Siegfried, and Tim there for the shoot and recording process – he really took on a fly on the wall position and didn’t get in the way of our recording so it was a seamless experience.

You have a show coming up for the Michael J Fox foundation this month, what can you tell us about that?

Yes! We are playing an acoustic set at the Cadillac Lounge April 24th. It is a fundraiser for the Michael J Fox Foundation and tickets can be purchased at https://www.eventbrite.ca/e/sunday-funday-tickets-21688746625

When can fans expect more shows?
Everything is on the down-low right now, but we can promise fans we will be making an appearance in the states this summer, and we will be playing more acoustic sets to promo our new EP! Our fans in Brazil should keep an eye out for something cool this summer involving Tokio Hotel covers!

They are some of the best fans in the world! We can’t believe that our EP has only been out for 6 months, and we have had this kind of reaction from countries all around the world. We can’t wait to finally get the opportunity to tour all those places one day so we can meet everyone!