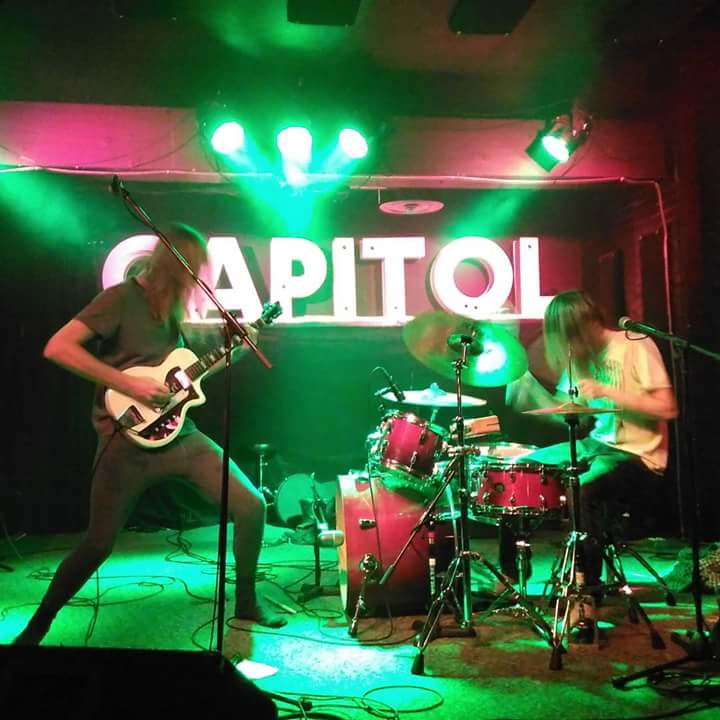 We recently had a chance to catch up with Saskatchewan based duo, The Faps and chat with them about several things, including their background, music and what’s to come.

The Faps are two guys from Southern SK, but we’ve been living in Saskatoon for the last few years. Skyler plays guitar, Blair plays drums. We both “sing” and “write” the “songs” together.

How did you meet and form The Faps?

We met probably 13 or 14 years ago. As kids we would both check out local all ages shows in Moose Jaw, we’d see each other there and had common friends. Eventually we decided to jam together, and it didn’t take. When we were around 17 we tried again with two other friends and it clicked, when that band ended years later we still wanted to play together but like-minded musicians were hard to find in Moose Jaw so we just made it work as a 2 piece. Skyler rented a house in Mortlach (Saskatchewan) in the summer of 2012 and wrote our first EP “ded lake”

You released an EP a few months back, how has the response been?

Hot Slaw has gotten all positive reviews. It’s all pretty fun to play, people seem into the songs at shows, which is great. BLK MTL was featured on SaskMusic’s InTune compilation, and “Like Mike” is available for download in cases of Paddock Wood. The songs are a bit more “traditionally rock & roll” for us and everything was done on an insanely tight budget – the release was rather low-key, just a snippet of songs for everyone while we work on a full-length.

Blair: Not really. We think it’s telepathy at this point. I guess we just love the unexpected, and try to inject that experimentation into rock songs, or punk songs.

Skyler: I come up with lots of guitar parts on classical guitar which are then transformed and arranged by the two of us. I think that contributes to some of the strangeness – I utilize more unconventional chords, progressions, riffs, timings, and nuances that become a bit wacky when played fast and distorted. The rest is trying to figure out fun structures and rhythms that are both familiar and jarring… and obscene noises sprinkled throughout.

What song would you recommend someone listen to if they have yet to hear any of your music?

Blair: Trophy Wives off our 7” split with our friends in Wizards has a good amount of our usual shenanigans in it. Really, we hope people will just come see us live.
Skyler: Trophy Wives, Opposites, No Girl on Girl, BLK MTL… those seem to be fan favourites, but I honestly don’t think it matters. They’re all loud and dumb.

You are hard at work on a full-length album, any idea when it will be released?

We’re trying our best to create an album that captures all the mayhem, and all the best of us. We’re still writing and refining songs and don’t want to rush anything, but we’ll be playing the new material live, and hopefully in the studio this summer.

I have heard talk of an early spring tour, what can you tell us about that?

We’ll be touring once it gets a little warmer out. It may just be a few stops in Alberta, or maybe a west-coast trip. People will definitely get the chance to see us, we love touring and playing, and we’re going to keep at it.

If you were able to tour with any other Canadian band/ artist, which would you choose?

Blair: The Biebs. Runner up, The Most Serene Republic.

Skyler: Noah Michael (FUCKBOY, iils;yls, Fuckworld, Pine Tarts, etc) or any of our friends (The Jump Off, Perverts, Man Meat, 36?, A Ghost in Drag, Sexy Preacher..) or someone rich & famous.

For someone who has yet to see you perform live, how would you explain the show?

It’s loose. We try to make the audience feel like they’re all in on the same inside joke, but it’s not a joke band. It’s tight, we play off each other pretty proficiently, we get into it. Casually intense.

Do you tend to perform covers in your sets? If so, what is your go-to cover?

Blair: There’s a song by Devendra Banhart called Dragonflys.. the original is about 45 seconds long, we cover that as a folk-punk song.. so our version is maybe 25 seconds. We’ve also covered Wormtamer by Grinderman, Like Mike has the riff to Beat It in the middle, and we’ve drunkenly done a Hank Williams song a few times. Oh, and “Pez” by The Flu.

The Flu from Toronto. Sexy Preacher, and Shirley and the Pyramids are great ones from here. Perverts (Moose Jaw) new album METH is fantastically stupid. 36? (Calgary) are possibly the best live show in the country.. FUCKBOY, Megan Nash, Minor Matter, the Dirrty Show, Stocatta, Ought, The Most Serene Republic, If I Look Strong; You Look Strong, Life in a Vacuum. There’s really no shortage.

Skyler: Shit. I started burning CDs at a really young age so I can’t really remember. I had a few Beatles cassettes, the Batman Forever Soundtrack, and a tape by a reggae artist named Lazo.

Blair: The most memorable one for both of us I think was Melt Banana. Holy shit.

Skyler: Most memorable was definitely Nick Cave & The Bad Seeds. Melt Banana was a close second. Most recent for me was seeing Shirley & The Pyramids and Dead Soft (Vancouver) the other night. Very good poppy grunge/rock.

Staying inside and writing music.

Blair: I work at the Underground Cafe in Saskatoon. The Etta James Lavender Latte is amazing. Also, hot toddies.

We died in 1932 and we’re actually high functioning ghosts who started a band. We’ll never get anywhere and this is our purgatory. I’d be surprised. I’d go see that movie, not right away, but once it went to the Rainbow maybe.

Thanks? Come to a show.