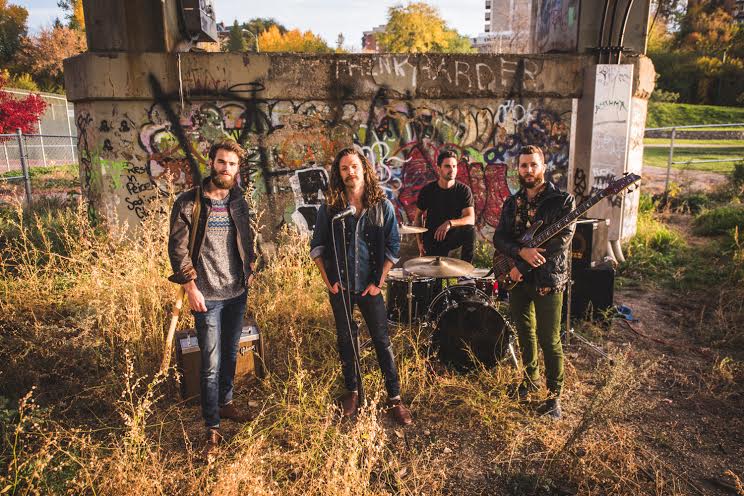 I recently had the chance to ask Saskatoon-based alt rock group, Bombargo a series of questions about their music, and their Born On Main Tour which started in Regina, SK on March 4, and ends on March 25 in Calgary.

First off, care to introduce yourself?

You released your EP, Back on Main in July of 2015, how was the response on this release?

The response was enthusiastic to say the least!  We played a sold out show to over 350 people at The Capitol Music Club in Saskatoon. We’ve sold around 300 physical copies, and 100 digital copies since we released the album. These numbers along with rave reviews from our fans and various publishing sources tell us that we are doing something right, and we are stoked to keep that trend going as we move forward!

Care to explain your writing process?

The process is always changing, but more often than not a song is born out of one person. Be it a guitar lick, or a drum beat, someone will bring an idea to the table. Then the band joins forces to create the musical framework of the song before shipping it off to the lead singer, who writes the lyrics and finishes the song.

When we’re lucky, we get to write as a collective unit, which is the most fun for all of us I think. This process always seems to lead to way too many ideas for our own good, but we make it work.

You donated all online proceeds to aid the Northern Saskatchewan forest fire relief, what made you arrive at this decision?

Well all four of us we’re born here in Saskatchewan and grew up here so we we’re all very aware of the fires as they happened. We knew first hand the devastation that they were causing to the people around them and we just wanted to help out in any way that we could. Luckily, our album had just been released and we were able to turn those profits into a helping hand to the people who needed it. We were thrilled to help out in this way.

You recently released a new single and video for “Precious Time (Lately)”, what can you tell us about this track?

Yes we did! We had the privilege of working with our friend and videographer Matt Smith for this video, which was an awesome experience. This was also our bands first music video; it was a cool milestone. The song is about the busy lives that we all live, and not having enough time to spend with the ones we love.

I think just the whole experience was rad. We basically drove around Saskatoon with all of our gear in three different vehicles, stopping at different spots around town to shoot. I think that we finished in about 3 hours, so we were hustling to make it happen haha. We’re all very happy with final product and the way it showcases our hometown of Saskatoon.

You have announced that you will be releasing your first full length album in September of 2016, can you give us any hints on what to expect from this release?

Our EP was made almost over night, the whole process was just a couple of weeks, and a lot of it was written in the studio. We spent a lot more time writing our songs that will be on the upcoming album, therefore it showcases our songwriting, tones and creativity. Each song really does convey a message and I think there is more depth to our lyrics. The songs simply have more parts and the instrumentation is more creative and complex, . You can expect a similar positive attitude from this album, the songs are upbeat and funky and just make you want to move. I think this next album is a big step up in quality and the time that we have put into it will definitely be heard. We can hardly wait to share our music with our fans!

You will be taking off on tour this March throughout Saskatchewan, Alberta and British Columbia, when can fans in the rest of Canada expect a Bombargo tour?

We will tour both east and west when we release our full length in the fall. We’re hoping to make it as far as Montreal our east on our upcoming fall tour! We are also playing Canadian Music Week in Toronto in May! We’re hoping at some point we can make it out to the east coast, but that might have to wait until next year!

For fans that have yet to see you live, what is expected from a Bombargo show?

A Bombargo show has a lot of energy! We love to make people dance, so when we play our shows we love to engage with our crowd. Everything from crowd surfing, drinking, dancing. Our lead singer loves to move, during guitar solos I’ve seen Nathan jump into the crowd and dance with everyone. The whole crowd becomes one entity and you can just feel the positive vibes.

What would be your ideal lineup for a tour?

Ideal is a big word! I’ll break it down into a few categories!

Some other huge high energy bands like Edward Sharp, Lee Fields, Ben Harper, the list goes on and on… All these bands would be amazing to learn from on tour!

If we could tag up with a band that was from Saskatchewan that would also be cool, we’re big fans of our home towns Jordan Cook(Reignwolf), and we think our energy would pair up really well.

Canadian Beats is all about Canadian music, who are you current favourite artists/bands?

What was the first album you ever bought and the first concert attended?

Facebook, simply because it allows to connect with so many fans through different forms of media. Whether we want to share a video, photo, our just our gratitude it’s a great way to reach out to people.

What is the one thing that your fans would be surprised to learn about you?

Our Lead singer Nathan is Team Captain of the Canadian Yukigassen(snowbattle) Team. He also holds the world record for organizing the biggest snowball fight in the WORLD. True story!

You’re all beautiful and amazing. Thank you.