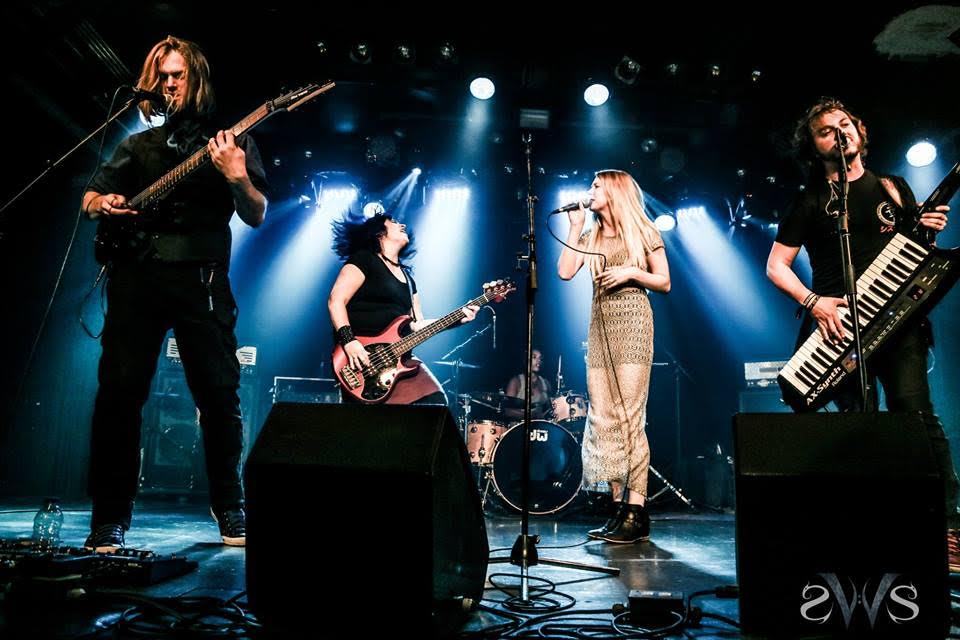 The Alibi is a five-piece alternative rock band from Montreal.  Forming in 2011, the band spent their formative years writing songs and performing live as often as they could.  It wasn’t until 2014, however, that they released their debut EP, Break the Distance.  The Alibi has had some shuffling of bandmates over the year’s but now consists of Nicole Gibson (vocals), Liam Delay (keyboards, guitars, vocals), Hyrum Wild (guitars, vocals), Johanie Beaulieu (bass) and Karine Mirambeau (drums, vocals).  We had the chance to recently catch up with The Alibi to see what 2016 has in store for them.

How would you describe your sound for someone who has never heard your band?

I would say it’s alternative rock with some pop and a little progressive and a lot of weird. If Linkin Park and Evanescence got together we’d be the product of the failed marriage and no one wants custody. :’(

When can fans expect a follow-up for your debut EP, Break the Distance?

“When the sun rises in the west and sets in the east, when the seas go dry and mountains blow in the wind like leaves.” So we’re practically in the studio now. But in all seriousness we have been working on new songs since the last EP finished and we’re almost ready and are planning to go to Silverwings Studios (The same studio where we recorded the EP) in the next few months. We’re super excited about the new material and can’t wait to have it all done and brought to your ears!

How has your song writing process/sound/etc. changed from your debut release?

The work has become a lot more collaborative now. It used to be mostly Liam who did all the songwriting, with some collaborations, but now we all bring parts and throw ideas together then it becomes a song! Also our singer Nicole has been very involved in the lyric and melody writing with this new album. With the last EP she pretty much joined a couple weeks before we went into the studio, so this time around it’s been quite a different process.

We take a lot of inspiration from Canadian artist like Devin Townsend, Billy Talent, The Damn Truth, A Primitive Evolution, October Sky and Alexisonfire. Also the local artists from Montreal scene are always doing really great stuff! And also our friends April Twenty Nine and Fall of Knowledge are great to.

It looks bleak. Just kidding! We’re working on a new album which is super exciting and is the main focus of 2016. And obviously a lot of work comes with that, Hyrum’s been working on the album artwork a ton as well. Also lots of live shows will be coming up in the summer, we have two in the next two months. The closest is March 31st at the newly renovated Piranha bar with some other great musicians. We’re also hoping to get outside of Montreal, hopefully Toronto. We know some great bands there that we’re planning to play with. And hopefully a music video as well!

Nicole: When you close your eyes do you wish for more, because I feel like this captures a lot of how people feel, always striving towards something and wanting more. Whether that’s a good or a bad thing, also it’s the first line on the first song of the EP!

Johanie: I really like City Night Trip and My Conviction a lot. One is about stealing a hot muscle car and do a road trip, which is something I’d really like to do someday (maybe not the stealing part, though!). The second one is simply a great confident booster.. I wrote the lyrics for both songs, so they hit close to home..

Hyrum: When All is Tumbling Down I like the chorus and the second verse ‘cause I wrote it!

Liam: I love the City Night Trip lyrics because it’s an escape to travel and freedom.

Nicole: I went to see Catey Shaw with our drummer Karine, we just went because we wanted to see a show, had no idea who she was but it was cool and just before that I saw Muse!

Johanie: Elliott Maginot. He was a great show, pretty intimate. Much more mellow than I usually attend, but it’s nice once in a while!.

Hyrum: Devin Townsend and Animals as Leaders, he was promoting the new Ziltoid album and it was the bee’s knees!

Johanie: Really?! It was over a year ago!

Liam: I went to see Nightwish it was awesome and Delain opening for Nightwish brought really good memories since we opened for them last time they came to Montreal.

Who is the troublemaker of the band?

Nicole: Hyrum, every once in awhile he decides to mess with the studio. Last time he decided that everything in the studio needed googly eyes. And then there were the disco balls…

Liam: Karine. But I don’t really want her to change!

Hyrum: I am the trouble maker. I play an eight string guitar in a band that has no place for it. Johanie used to get so mad at me.

Nicole: Take pictures of my cat Aslan, I have a secret Instagram account dedicated to him, which no one knew about till now. And sew, I like to sew and quilt. I am a grandma on the inside.

Johanie: I attend a lot of shows, I even write about them in a journal and I add in it the tickets stubs, some pictures and any other things I happen to catch if I’m lucky. I like to customize my things by trying art ideas on them and do some other DIY stuff, like last year I repainted one of my bass. And I can say I am officially a crazy cat lady, I’ve got three of them.

Liam: I like to go to restaurants mostly and going shopping!

Are there any hidden talents amongst the members of the band that you care to share with Canadian Beats?

Hyrum says he can undress a woman with a forklift (he drives a forklift for a living). But he’s actually really amazing at art, he did all of our artwork, such as the album cover and all our posters! You can check out our Instagram to see his drawings as well. We all kind of have our special skills Nicole does the PR and Social media, Liam the Managing and Johanie all the videos and sound!

What would you serve Canadian Beats for dinner, if you were to have us over for a dinner party?

Nicole: Pretty much all I eat is Mexican. So I would make something Mexican, Fiesta forever.

Johanie: Not sure about the dinner itself but some maple beer would definitely be part of the party!

Hyrum: The heart’s of your enemies. I aims to please.

Liam: I can make homemade pizza and some pretty great guacamole. I’m trying to get back into pastries so i’ll get there eventually.

With spring around the corner, we at Canadian Beats are thinking about festival season.  What summer festival are you looking forward to the most, and why?

Nicole: I’ll probably buy a 1 day pass to Osheaga I want to see Radiohead and it’s cool to see Montreal based bands like Elephant Stone and Caveboy are playing. I am also excited to see the Amnesia Rockfest lineup!

Johanie: I had an absolute blast these past years at Toronto’s Riot Fest so I was really looking forward to it, unfortunately it seems that it is cancelled this year. But I am also impatiently waiting for the Amnesia Rockfest lineup too, it is a very very close second place!

Hyrum: None. I was born a cranky old man and festivals involve far too much rubbing against other sweaty humans.

Liam: Amnesia Rockfest in Montebello because I went the last two years and it was awesome!

In twenty words or less, describe The Alibi.

We decided to do this portion in haikus By our guitarist Hyrum Wild:

Where is my money
I can’t even afford food
Look! A new guitar