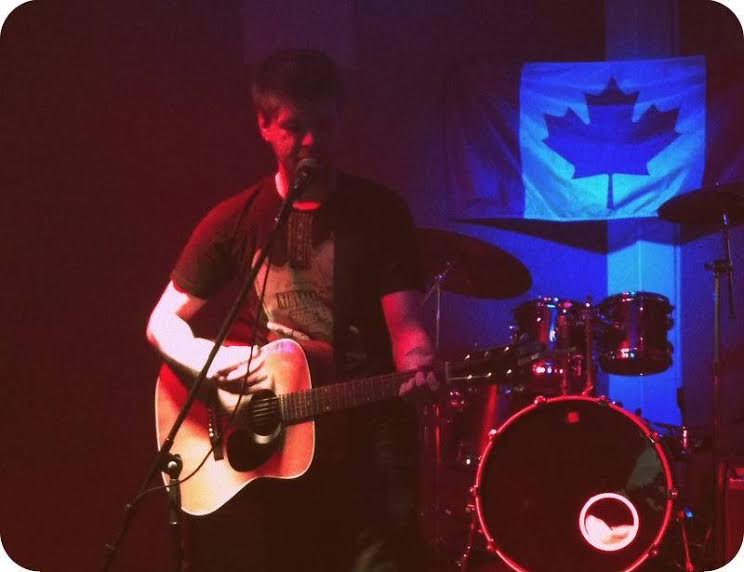 Josh Dimmel is a native of North Bay, Ontario, in his second decade of music. With early beginnings in several bands, he is now moving onto his own solo work. He does almost all of his own recordings, videos and promotion, he is the true meaning of what I would call an indie musician.

You have an interesting mix to your sound, I would almost call it acoustic rock, where do you think your unique sound grew from?

Since I was a kid I loved rock. I’ve also always been in a band either a Josh Dimmel Band or playing some other instrument or vocals in a different band while on the side for the last 12 years performing and writing solo. The early influences to my style were Bono from U2, Blur and Raine Maida of Our lady Peace. As I grew up I got heavy into Pezz which later became Billy Talent. Then other influences go like this for my top influences: Matthew Good, Motion City Soundtrack, Nirvana, Red Hot Chilli Peppers, Kings Of Leon then Paramore. So I kind of took all these amazing bands and artist and meshed them into my own voice and style.

I see you are involved in organizing music showcases, do you find this has helped your own music?

It really does help but not just for my music. I love helping people as much as I can and have been organizing my own shows now for years. The Tuesday Music Show Case at The Voyager Inn Shooter’s Bar has been going on since last May. So it’s almost a year in and there’s always something new each week it’s a lot of fun. I got to meet a lot of new people, got to sell a lot of my albums there and also gave out tons of demo albums there. The staff are friendly, the owners are friendly and the crowd is for the most part half different and half recurring each week. I also got to play and jam with a lot of musicians there including friends, new comers and local artist I never really got to jam with before this. So over all I love it and it really does help.

You seem like you do just about everything pertaining to your music that many musicians find other people to do for them.  Do you like to have all the control over every aspect, or would you gladly let someone else take the reins? Tell us a little bit about this.

In all honesty I do. I love having the control. I’ve been working on my solo music, like I said, for about 12 years, while going in and out of different bands and also working on my solo band which is the Josh Dimmel Band. I like having the control over my music for what videos get posted, how the posters will look and what the schedule wlll be for a live aspect. As for Josh Dimmel Band as longs we do half originals of mine then I’m fine. I will cover anything the band asks and as will they. If one of them can’t make a show then I either play solo or we don’t play. I will not play the show and change members at the last minute I find that to be disrespectful to the band and Rob, Will & Lyle are great guys.

What was the first instrument you learned to play?

First instrument was vocals, but I sang threw my nose at first. As time went on the order kind of looked like this: Vocals, Bass, Guitar, Keyboard, Drums/Percussion/Cajon, Ukulele.

A month ago you released a video for the song “Drive”, tell us about the making of the video.

That was actually released last April (April 2015) but I re-uploaded it in January of 2016. I always clean out my YouTube Channel and re-upload certain things at the end of each year. That was the first music video I filmed and edited myself. So there’s some things I wish were better but you live and learn.

Are you working on any new material or releases to come in the near future?

I just worked on a new demo album which is my seventh demo album I recorded myself this past week called “Waves From Home” which covers a lot of topics from feeling the pain of someone running away, the tension this world holds and how restricted we are to what we can and can not say these days, depression, paranoia and love. It is also the first demo album of mine to feature my Ukulele. Before that I worked on a studio EP called “Open Your Eyes” which was recorded in 2015 in James’ studio.

When you play live, do you mainly play solo, or do you have a backing band as well?

I’d so these days more so solo but I do play a lot of full band shows with my rock band Josh Dimmel Band and also Electric Company (an alternative/folk rock band I play with).

Tell us a little bit about your experience with “Canada’s Got Talent”.

Where to start haha. This was in 2012, I was still living at home with my parents. I had an old Corolla and my Dad had a Seabring both cars weren’t in the best shape and they really wanted to come with. So he rented a jeep. Also Mel (from The Mel Band another band I play bass in) came along to. So we all got in the car, we stayed at a hotel, I fell asleep watching Monday Night Raw on The Score. I only slept an hour though. We had to get up for 3AM to wait in line for 4AM. So we did just that and Mel, myself and my girlfriend (who is now my fiancé) Erin took a cab there. There was barely anyone in line yet so I was excited. 10 or 11 hours had passed the line still didn’t move. These other people got in first because they had some sort of pass and finally the line up moved, we got in, took another 3 hours waiting in the stadium, then we all got room numbers to go to and we all had to go audition in a room with a bunch of people, a camera lady and a producer. It was fun for sure, lots of patients needed but fun.

What was it like opening for bands such as Our Lady Peace this past summer?

Wasn’t what I expected at all. They had no security at the event. I got to meet I Mother Earth though which was cool.

We like to ask a few fun questions to help the fans get to know you better:

If you could organize a Canadian only festival what bands would you love to invite to play it?

Do you prefer Coffee, Tea or Hot chocolate?

Tied between coffee and tea

Who did you see as your first live concert?

Is there a musician that has inspired you, and continues to do so?

All four members of Billy Talent. The tight music they right, the riffs, the vocal melodies and just how humble they are. It is my dream to one tour with them.

What is your favorite part of creating new music?

A new feeling you have at that time and also a different sound. Each day, month and year that goes by so much has changed. Once you’re tired of playing your older music (besides a few songs on each album the people like a lot, I always continue to play the best from each one) it’s like a breath of fresh air and a new start and a new journey it’s strange where songs will take you.