Who: David James
When: January 28, 2016
Where: Four Crowns Inn Hotel in Winnipeg, Manitoba

David James is a country music artist based in Winnipeg, Manitoba. On Thursday, January 28, 2016, David held an EP Pre-release Fundraiser at a local bar for his upcoming EP titled Songs About a Girl. It was an intimate atmosphere with family and close friends, along with fans of all ages. This was the best performance to date for me. David was in top form because he wanted to please the crowd. And please us he did. He was pitch perfect in each and every song.

David and his band (Kris Ulrich on lead guitar, Karl Shewchuk on bass, Lucas Sader on Cajon drum) took to the stage at 8:00 pm and they did not disappoint for the hour that they performed. David had the audience spellbound from the first note of “Letting Love Get Reckless” until the final note of Roy Orbison’s “Pretty Woman.” They played ten songs that included three previously released singles of David James (Letting Love Get Restless, Some Hearts and What We Weren’t Looking For – which you can download from iTunes), songs from his upcoming EP, a song he co-wrote with Deric Ruttan that will be released by Bobby Wills (Get Around to You) and a few covers. 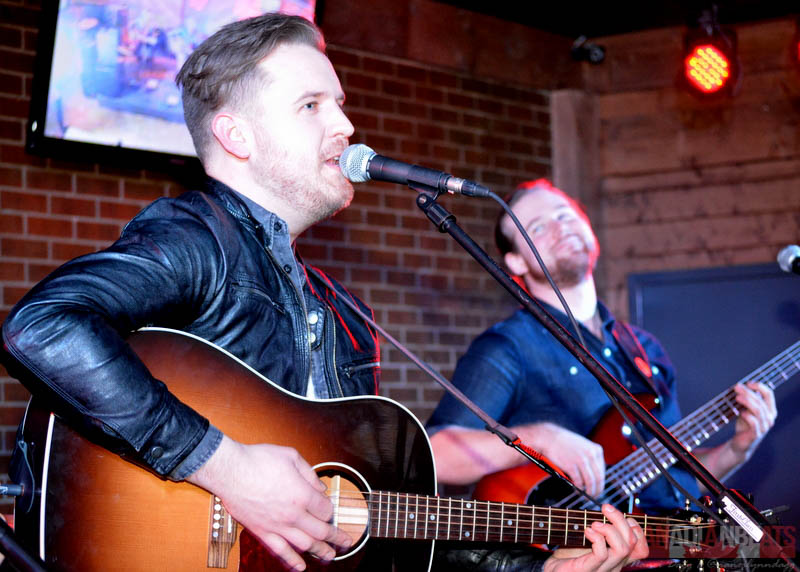 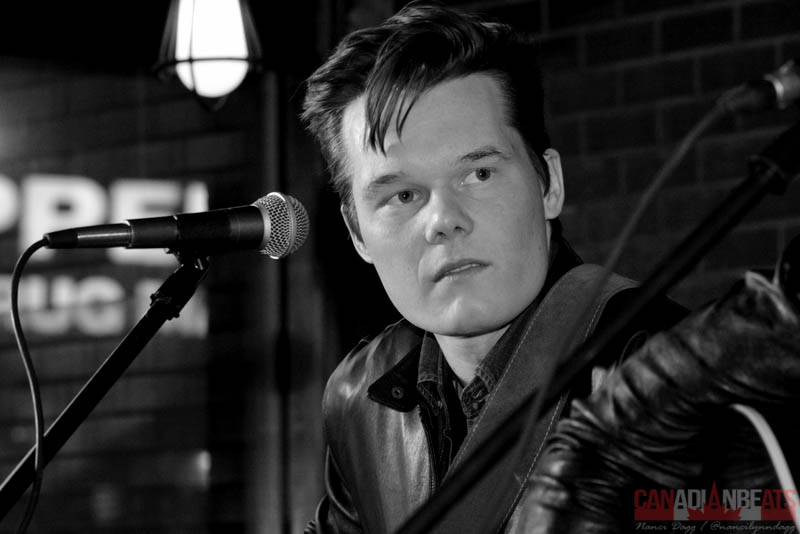 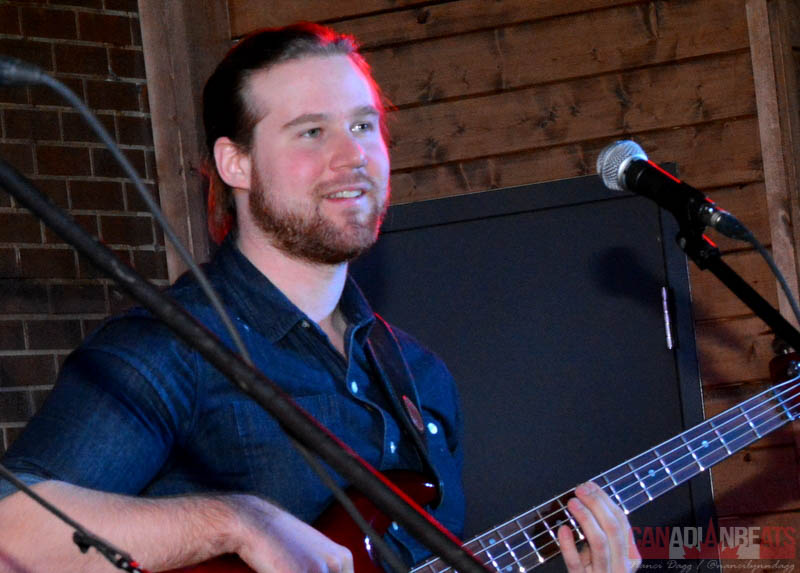 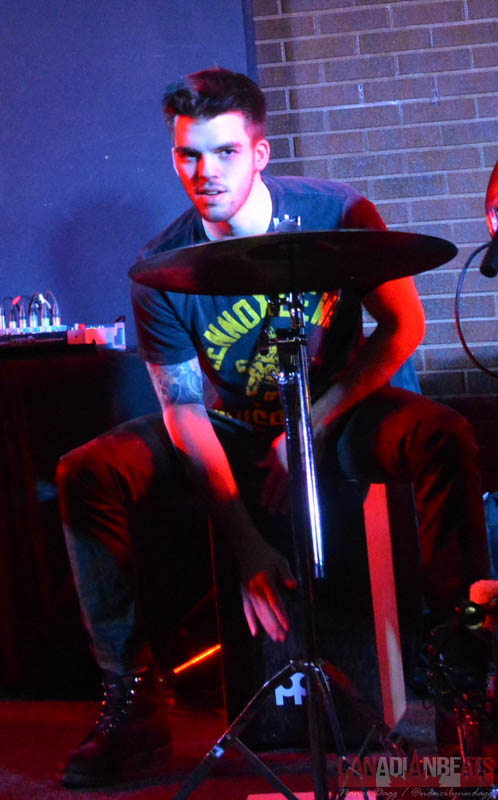 David started the night with his first released single “Letting Love Get Reckless.”  He grabbed our attention right then and there. His “magic” was released. David simply has star quality and that has only increased over the few short years he has been on the country music scene.

“Some Hearts” was his second song of the night, a song that was released in September 2015 and with his melodic voice, the audience was giving David their full attention. This song has a lyrical content that evokes emotion from you that you didn’t know you had.

This song, “The One I Always Wanted” made one wish that you were the one that is always wanted my THE man. It was a romantic song with a very catchy beat. And, as with all of David’s songs the lyrics flowed well and are so well written.

“Starts with a Girl” (a single he hopes to release this fall) left us all with goose bumps. It started off as a slow love song then went very upbeat. This one could be my new favourite song!

David changed things up when he sang Bryan Adams “Heaven.” He did forget a couple of the lyrics on this one. I think, because he hasn’t been on stage for a while and he was up there in front of people that mean the most to him, he simply was nervous. No one seemed to notice that though. This was an acoustic song with him and guitarist Kris Ulrich. The two of them together with their perfect harmonies had us mesmerized. STELLAR describes this best.

“Get Around to you” was next. Every time David writes a song, he does so for himself. With this song, he got to write with one of his writing idols, Deric Ruttan.

I could tell that this didn’t have the same feel as all of David’s songs that he does write for himself. It was written for another artist, so this was the one song I didn’t enjoy as much as all the others. It just wasn’t a David song. Bobby Wills will do this song justice however.

“Lonely Girl” is going to be a big hit. David refers to his next single to be released on February 15, 2016, as his “one trick pony.” It is very catchy and upbeat. An “I want to be your hero” type of song. If you want a preview of it, David performed it acoustically for Leanne Cater at QX-104. See it HERE!

This song was released February 14, 2015, (how apropos)  – “What We Weren’t Looking For.” The reception from people for the tune was incredible. This was the second song he did acoustically with Kris and it is so emotional – from his as well as our standpoints. With this song, he got what he hoped for – music that matters to people. About a month after its release, a woman reached out to David on Twitter to let him know that she was using this song for her first dance at her wedding. David sang this song like he was singing it to you personally and only for you. If you don’t fall in love with David as an artist with this song, I don’t know what to say.

“Find a Girl” – David felt like he drastically switched gears for this song. He called it his “most party song that he has ever written” but it’s not that much of party song. He invited everyone up to dance, (“Nanci, I’m looking at you!”) which would have been weird since there wasn’t dance floor. He really had connected with the crowd by this time so I am sure, if there were a dance floor, it would have been packed.

“Lay it on Me” was a sexy, scandalous song. David co-wrote this song with Brian White. This song’s concept is based on the marriage of Brian and his much younger wife and how Brian feels about coming home after a hard day’s work to his “Smoke Show” of a wife. This song is a little intimate, so much so, that David said “Sorry Mom” before starting to sing. His mom told me afterwards that she thought it was going to be “more kinky.” It is a beautiful song.

David’s last song of the evening was my favorite cover song that he sings – “Pretty Woman” by Roy Orbison. When he did the “growl” I think every woman in the room swooned. David has a way of taking any cover song and making it his own. That is how he connects with any crowd.

In David’s own words as the night was coming to a close: “This night meant the world to me. I was telling people that I never get nervous before a show but with all the new songs, straight down and acoustic and this being intimate, it was a little scary. I appreciate you coming out and supporting me. To have such caring family and friends who are behind my career and take the time to come out to shows like this, I really appreciate it. Thanks so much. “

And this is why David’s career is going straight up. He is kind, honest, humble and grateful. He is a shining star that is only going to get brighter. He oozes sex appeal. He is the boy next door. And with his twinkling blue eyes is the whole package. 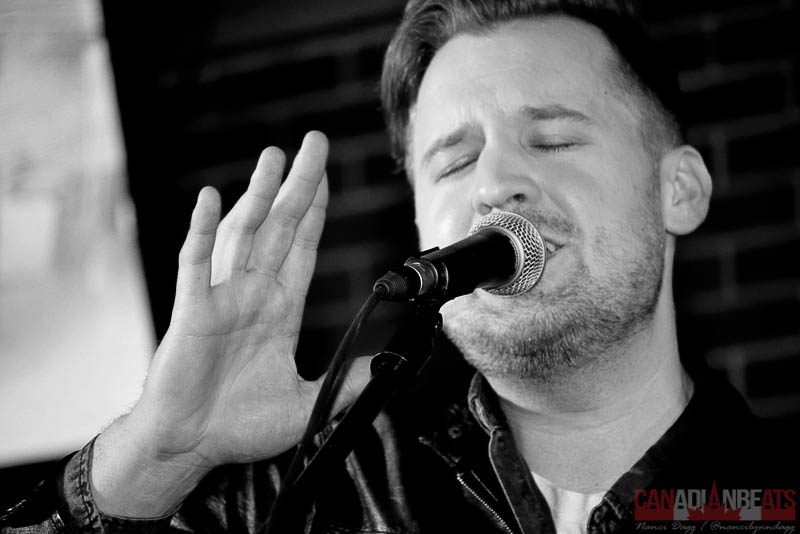 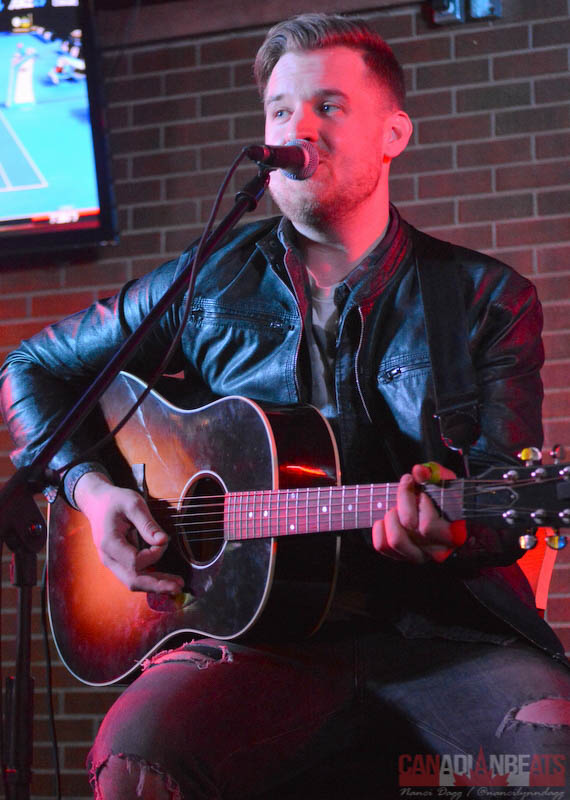 I decided to go into the crowd to see what they had to say because my opinion shouldn’t be the only opinion expressed. I asked them what they thought of David’s performance, what their thoughts were. This is what some had to say:

From people who saw David for the first time:

“He said he had some time off. I didn’t see it. He obviously is doing something he honestly enjoys doing. I love him. He did really well tonight. I loved that we could understand every word. He was very comfortable on stage.”

“This is the first time ever seeing him although I’ve had his music in my iPod for a long time. I was asked to come to be a part of this evening and it was phenomenal. He’s got a great voice, great music, writes great pieces. I am just tickled pink that I could be here and be a part of it.”

It was fabulous. The band is very well coordinated; they look great up there. David’s lyrics and his song writing are so beautiful. I was almost in tears he was so lovely.”

“I was absolutely thoroughly impressed. I thought his writing is phenomenal.”

“I especially liked the part where he said – sorry Mom.”

From a long-time supporter:

“He was fantastic. It was very well done. His songs seem to have a very good beat and melody to them that resonated with the audience.”

I would like to take this opportunity to thank a friend of mine, Alexandria Kowalyk, for not only being at the show with me but helped me reconnect with what I saw and felt at the show, helped to refresh my memory.