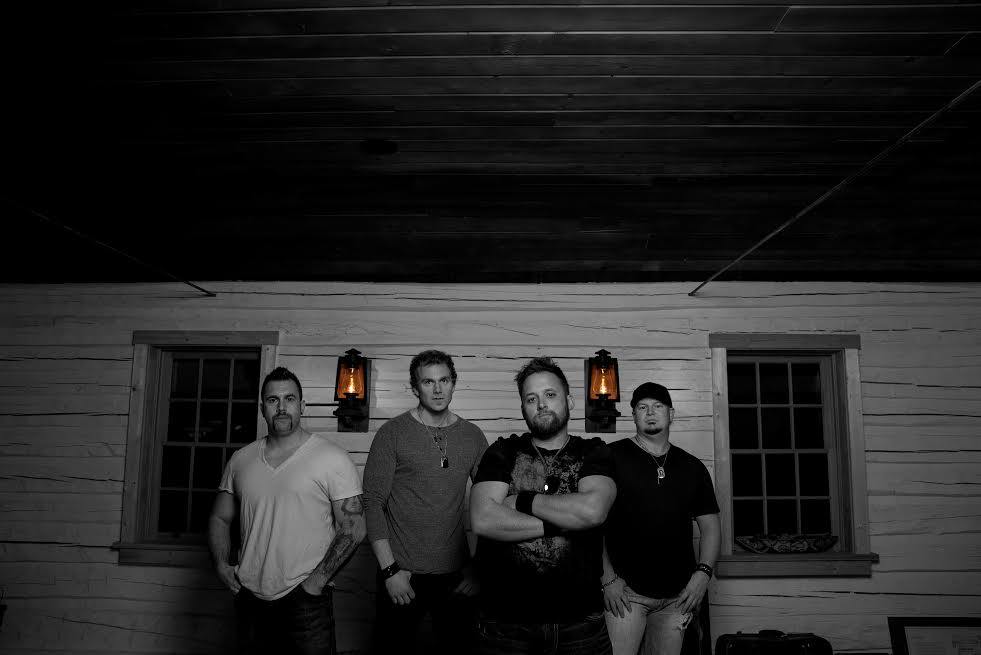 In the past few years many Newfoundlanders have relocated for Fort McMurray, AB. Donny Synard, Trevor Lethbridge, Danny Fewer and Mark Stewart are four of those and collectively they are known as the rock band Freedom’s Note. The band just released their first single “All We Know” and are set to release their debut full-length album “Trial By Fire” in May 2016.

ALL: Well, honestly….  We are just four guys who don’t want to give up on their dreams.  We all moved to Fort McMurray several years ago from Newfoundland and through the local music scene, we all became acquainted with each other.  Donny (rhythm guitar, lead vocals) and Mark (bass, backing vocals) were personal friends and went to high school together back in Newfoundland. Trevor (drums) and Danny (lead guitar, backing vocals) were playing in a cover band together, here in Fort McMurrray.  Through some trials and tribulations, we all managed to connect and begin this journey.

You’re set to release your debut album in May, what can you tell us about the writing and recording process?

ALL: The recording process was long since we decided to record in Calgary, AB at multi-award winning MCC Recording Studio with Dave Temple and award-winning and Grammy-nominated producer, Johnny Gasparic.  After meeting them personally, we knew they had our best interest at heart and wanted to help us make the best record possible.

The scheduling to record our album was challenging since we all work regular full time jobs.  We had maybe 2-3 songs completely written and bits and pieces of about 12-15 songs underway.  For the process itself, a lot of the time it started with Donny or Danny coming up with particular chords and riffs. The melody, we usually wrote to whatever got us the most excited.  Donny would work on the main lyrics, Danny would work the guitar parts and once the structure and lyrics were figured out, it would then be brought to the rest of us and we would sit down as a band and start piecing together all the parts.

The amazing thing with working at MCC? Sometimes things would change in there with Dave and Johnny just really understanding what we wanted and knowing the best direction for us.  Johnny as our engineer/producer really pushed to get the best performances out of us and Dave really always seemed to be involved and kept the process flowing positively when things weren’t going as planned.

Overall, it was a great year and a half journey and experiment to create “Trial By Fire”.

There’s a very interesting concept behind the lead single, All We Know. Can you tell the readers a bit about that and why you chose it as the first single?

DONNY: I guess you could say that “All We Know” best embodies where we are as a band right now.  We wanted the first single to be what represents “us” as a band and what we believe, what we dream.  For all of us, music is truly ALL WE KNOW and all we want.  Trevor and Danny have kids, and we wanted this song to send a message to them, and, to everyone that listens, to understand you never give up on the things you want or believe in.  We are all going to have dark days — we hope that this song can be an anthem or that ray of light for those that need it.

We had a lady that has struggled with cancer over the past couple years write us personally saying we inspired her. To quote her, she said, “”All We Know” is all I need to know! “ To know that we reached even one person was gratifying to us.  By inspiring her, she has inspired us to never quit this dream.

You have a very interesting mix of influences that range from Guns ’N Roses and Foo Fighters to Shania Twain and Pink. How do these all come together to make your own sound?

MARK: Well, Guns N’ Roses was the best part of our younger years for all of us.  Five guys from across the US finding each other in LA, who were determined to make it, regardless of being turned down and away on numerous occasions.  Who doesn’t remember the riff to “Sweet Child O’ Mine”?

The Foo Fighters are what we identify as ROCK these days.  Many claim that rock is dead, yet here they are, selling out football stadiums all the while staying modest and true to their craft.  With Shania Twain, it has a lot to do with a young girl from small town, northern Canada fighting through major adversity to become one of the biggest women in country music.  Plus, all the work and music she created with the famous producer, Mutt Lange who has also been a major inspiration to us.  Lastly, Pink is all about the attitude.  There is something to be said about her music.  She makes her music very personal and when you see her perform you almost feel like you are part of what she is saying.  That’s rare these days.

You’ve opened for Finger Eleven, Vince Neil of Mötley Crüe and the late Scott Weiland to name a few. How has playing these shows helped your own live shows?

DANNY: First of all, we have been VERY fortunate.  Fort McMurray and the friends we have made here have made it all possible.  Finger Eleven was a show we did on 2 days notice. Our very first show?  We OPENED FOR FINGER ELEVEN!!!!  The guys were amazing.  They were very modest, friendly and their best advice, “Just work hard everyday!”

We never got to meet Vince personally but before we got to open for him, he wanted to hear a couple songs and he approved, which we thought was really cool.  Vince Neil has heard our songs!

And Scott Weiland…well, what can we say.  Another icon gone too soon.  We were very lucky to have lunch with him prior to the show and he was just like one of the guys.  He even dropped in to our room after we performed to thank us for supporting the show, take a few pictures with us and then hit the stage.  A great memory…  RIP Scott!

TREVOR: For most of us, that changes.  For Donny, Danny and Mark it would have to be “My Own Demise”.  This song isn’t on the record, but one that Donny and Danny collaborated on together for the very first time from start to finish.  It is rock with a punk element.

For me, it is “Good-Bye” which will be on the new record.  I enjoy the intricate parts and the build-ups.  Plus the steady “thumping” of the kick drum.  Again, on any given night, it can vary.  A lot of times the crowd interaction can dictate what our favorite songs are.

DONNY: Well, we all have day jobs so touring will take some organizing.  We are talking to booking agents currently and trying to decide where the “hot spots” are for us.  We want to get out to where we have some successful radio play, downloads and social media interaction.  Show the loyal fans and Followers some “Live” appreciation for getting on the Freedom train!

ALL: To name a few — with word that Axl Rose and Slash have confirmed the reformation of the Guns line-up, that would be one amazing experience for all of us.  Another one would be Dave Grohl.  He has collaborated with numerous artists and bands and they have all found great success from it. Like we already mentioned, they are maintaining their rock status and Grohl continues to do great things in the industry right now.

Lastly, if we could ever get in the studio with Mutt Lange, it would be great to see where he could take our music and what we could learn from him. It would be a dream come true to be standing behind the glass and see Mutt sitting at the board…Mutt?  Can you hear us?  Lol

DANNY: Alexisonfire.  I like the music loud and hardcore as much as possible but he always brings great melodies.  Once you hear the record and the riffs he displays, most won’t be able to argue with that statement.

TREVOR: I grew up a Tragically Hip fan.  That said, I’m probably the most diverse in the band with regards to music that I like to listen to.  If given the opportunity, I could spend one day in the studio with Nickelback and the next day with Michael Buble.

MARK:  I’m an old-school rocker.  For me, it would probably be Kim Mitchell.  Mitchell displays great melodies and intricate chord progressions and makes every song and album very unpredictable.  That said, we’re wishing Kim a speedy recovery! Rest up and get well so we can keep hearing your great music.

DONNY: I’ve always been a big fan of Bryan Adams.  Adams has worked a lot with Mutt Lange so we are sure that he has great experience and value to share.  Another name that comes to mind is Alan Doyle.  As a fellow Newfoundlander and the lead singer of Great Big Sea, to see the worldwide success he has as an accomplished musician and now actor, is a true testament and inspiration to what any of us can achieve through hard work and dedication. Inspiring!