By Lindsay Newman on January 25, 2016@https://twitter.com/lindsaynewman_ 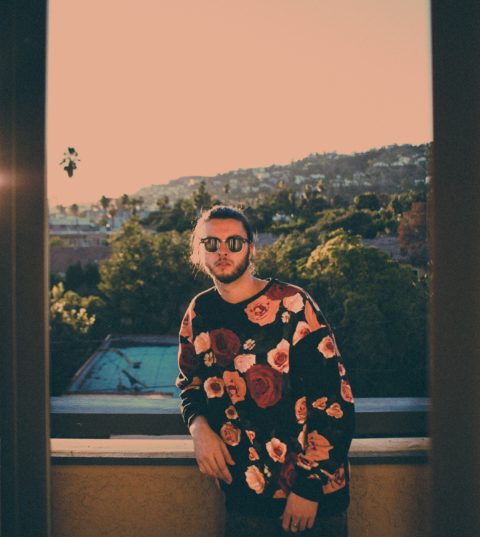 Vancouver’s Old Man Canyon recently released a full-length album, Delirium on Jan.15 and also wrapped up a sold out North American tour in which fans we’re treated to a preview of the new album. While the debut EP Phantoms & Friends is rooted in a folk-pop sound, comparable to acts such as Chet Faker and Fleet Foxes, Delirium is an evolution in style and genre, bringing new elements that are in-line with the goals of the live show. Delirium finds Pace phasing in vintage synths and electric instruments.  We had a chance to talk to Jett Pace of Old Man Canyon and here’s what he had to say.

The album has been out for a of couple days now, how has the reaction been so far?

Its’ been great so far, everyone that’s heard it has been stoked.

I spent most of last year writing the material for it and ended up with around 300 songs, some complete and some that were just bits and pieces that I had to go back and finish. Throughout the writing process, I just naturally selected about 20 that I thought felt cohesive to each other and recorded very detailed demos at my home studio by myself and got them to a place where I then wanted to re-record them in a larger studio. I ended up recording with producer Mike Butler in San Diego for about two months on and off until we had completed the record.

How was writing Delirium different then writing Phantom and Friends?

Well a lot changes in four years as an artist or musician, both in what you want to create and how you create it. I really wanted this record to be more upbeat and dynamic. I wanted a live show that really reflected the album and its vibe in an authentic way–something I didn’t do with Phantoms and Friends as much. I also was very drawn to vintage synthesizers and analog equipment, which definitely played a large role in the tone and overall sound of the record.

Who were some of your musical inspirations on this record?

I listened to a lot of stuff growing up, Michael Jackson, The Beatles, Led Zeppelin, Tupac, Biggie. I think I’ve taken bits and pieces from many different genres and tried to fuse the aspects in them that I’m drawn to.

You recently concluded a sold out North American tour with The Paper Kites, what was that experience like?

The whole tour was really great, each show was so much fun, the crowds had great energy. It was also really awesome to be able to tour with such a great group of people,  it makes the craziness of the road that much more tolerable. Only wish every tour could be as awesome and smooth as this one was.

Do you have any New Year resolutions, if so what are they?

I kind of always have resolutions in my mind for what I want to improve in myself but I think something I hope to do more of is collaborate, both in this project and in others. I do all the writing and producing for OMC so I definitely sometimes feel like I want change it up and have other people around to bounce ideas off of and not always be the only mind creating.

If you weren’t making music what would you be doing?

I’m really not sure, something else artistic I can only assume, that is really all I know how to do. The thing that’s nice about being a musician is that I can simultaneously pursue all my others interests like graphic design, drawing and video production. They all tend to be things that that are useful to each other, so its fun to find as many ways as possible to be involved in expanding your art.

When did you decide you wanted to play music?

I can’t really remember, I think I’ve just always had the desire to create things, and music happened to be one of them.

What would be your favourite song? Why?

I really don’t have one. There’s too many that are so great.

You are awesome and I adore you!