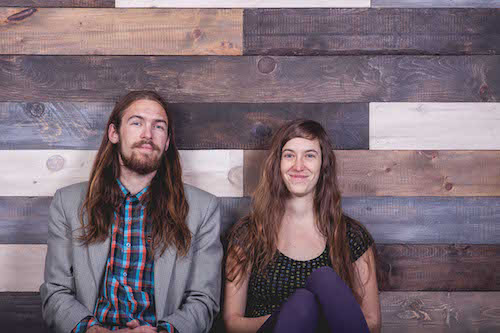 Roger Roger is a folk/roots duo hailing from Winnipeg. The talented siblings are getting ready to release their debut album entitled “Fairweather” on January 15th. If that’s not enough, they will immediately set out on a Western Canadian tour. We got a chance to catch up with Roger Roger before all the excitement begins, to talk about life and music.

Tell me about your writing process, what inspires you?

Madeleine – Songs come to me at random and inconvenient times, which is why I always keep a notebook with me. I’ve never written a song the same way twice. Sometimes I write the melody first, or the chord structure first, or the lyrics first. Anything can be inspiration, if I am thinking about it the right way. I love thinking about characters and imagination and circumstance.

Lucas – I seem to construct songs almost in their entirety except for the lyrics, and then ad-lib my way through them for a while until a subject bounces into my head. It sounds weird as I explain it, but I like having a vocal melody that I find enjoyable to hum or whistle before I figure out what I’d like to say. By the end I want the lyrics to be at the forefront of the song, as well as what people remember most from it.

What’s it like sharing your passion and making music with your sibling?

Madeleine – Agonizing. Absolutely horrible. Just kidding, we’ve had a lifetime of sharing, so it’s second nature to work together. We each take on the tasks that we’re good at. I act as the band manager, being the paperwork savvy one, and Lucas keeps the guitars in tip-top shape. We both really love each other’s songs, so it’s always exciting to play them together. We’re really lucky that we get along so well, and in the moments where we don’t, we can be rude to each other and then get over it in about a half a second. Perfect.

What made you decide to pursue music together as a career?

Lucas – Chance and timing. We both had all of these songs waiting in the wings at the same time, and it felt pretty obvious that we would teach them to each other and play some shows. Everything fell into place after that, we started to play more and more, and people started asking if we had an album. Well, now we do.

What was it like having your father, Lloyd Peterson, co-produce this album?

Madeleine – So much fun! We all have similar tastes in music, because we were happily brainwashed into loving Canadian singer-songwriters and rock & roll. There was nothing to disagree about; we were all on the same page from day one about how we wanted the album to sound. We had a great time and made fun of ourselves a lot.

What is your favourite song on this album and why?

Madeleine – Oh no, I love the whole thing! “O Rainy Day” sticks out because of the soundscape made of paintbrushes and paper, and I love the groove when the bass kicks in. The song is about my favourite painter Friedensreich Hundertwasser who lived on a sailboat named “Regentag”, and this song is a tribute to him and the unusual life he made for himself.

Lucas – Woah really? That’s like asking which of your 9 children gets a lollipop while the others have to watch. The title track “Fairweather” is interesting to me for a few reasons. It was the first (and only) song I’ve written where I had the lyrics and melody finished before bringing it to the guitar. It’s also played in open-D tuning (although Madeleine plays it in standard tuning). Other than the technical side of things, that song is extremely self-reflective and it came at a time where I had to be very honest with myself. Fairweather is also not a word.

What do you hope listeners take away from this album?

Madeleine – I hope it gets people’s imaginations going, and that they have pictures in their minds about what the songs are about. It doesn’t have to be accurate, I just hope that our songs leave people with a sense of wonderment and a memory of what the story is to them. We hope it’s an album that people can see themselves getting familiar with.

Here at Canadian Beats we like to include a “just for fun” portion to help your fans get to know you better, ready?…

Madeleine – I’d probably take a stab at playwriting or kayak building. I’ve got the wood for one hanging up in our garage, I just need to make the time. Maybe I’d write and illustrate children’s books, or get really involved in food politics. You can see that I’m aiming to make a bajillion dollars. Puppet-maker? Why not.

Lucas –  I currently build and fix guitars on the side which suits me wonderfully. I just strung up Madeleine’s new guitar the other day! I hope to keep building guitars. I love working with my hands. In my earlier years I could have seen myself in culinary arts or working on cars. I currently own and am restoring a 1967 Chevelle 300 Deluxe. Some day I’ll drive it.

What is most frequently played on your personal playlists?

Madeleine – Right now, “Young Man In America” by Anais Mitchell, “Sally’s Dream” by Bill Bourne, and “Back To Me” by Kathleen Edwards.

What do you like to do in your free time?

Madeleine – Kayak, run around the Boreal forest, make things with my hands like meals or clothes or drawings. I’m usually on the go, unless I’m reading a really good book.

Lucas – In the summer I try to skateboard every day. In the winter hockey takes over. I love to cook and hang out with my super awesome friends.

If you could play with an artist or group, who would it be and why?

Madeleine – I’d love to bring Keith Moon back from the dead and feel his drumming in the same room. On second thought, I probably wouldn’t survive the experience. Maybe I’d be better off connecting with my current hero Anais Mitchell, because I’ve never been so staggeringly overwhelmed by the genius of someone’s songwriting.

Lucas – Tom Petty for sure. For as long as I can remember I’ve been listing to The Heartbreakers. I have all their albums and I still listen to them regularly. I’ve seen them many times and believe that they are one of the greatest bands ever. If not Tom Petty, then Joel Plaskett. He’s the man. All of his albums are great. He’s got lyrics and melodies that I love hearing over and over again and he’s a master of guitar sounds.

Madeleine – Don’t be a stranger! And thank you.

Lucas – You’re the best! I hope you have as much fun listening to Fairweather as we had making it. Haha, not possible, but I hope you try. Good luck.