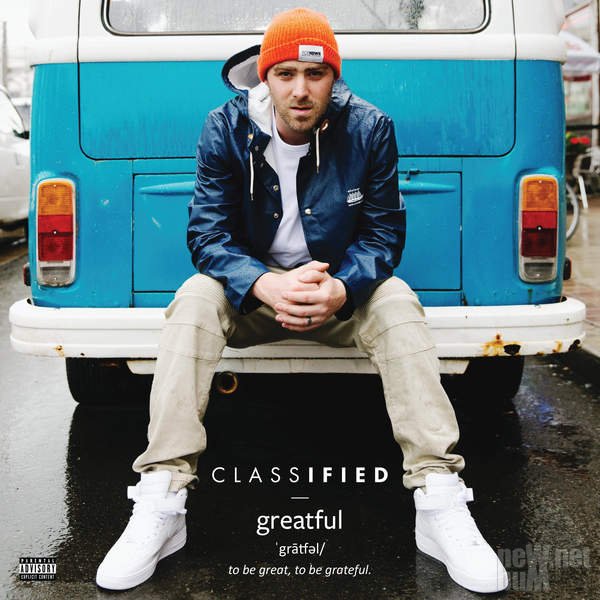 Enfield, Nova Scotia hip hop artist Classified is back at it again with the release of his new album ‘Greatful’ on January 15th, 2016. The album follows the success of his 2014 self-titled album which include hits such as “Inner Ninja” featuring David Myles, “3 Foot Tall” and “Payday”. ‘Greatful’ includes 16 tracks and features other artists such as David Myles, Ria Mae, Mike Boyd, and even Snoop Dogg.

The album opens with “Filthy”, featuring DJ Premier. The song takes inspiration from the style of hip hop from the 90’s and features Classified’s classic true and honest lyrics. “Heavy Head” is another example of Classified’s very honest lyrics which give insight to his feelings on the business side of the industry such as “thinking I’m a pop act because I have one pop track that popped off thought they did their homework, guess not”, and stating that a label wanted him to work with more mainstream artists such as Cody Simpson and Simple Plan. “Work Away”, featuring David Myles, is a tribute to those that work far from home and away from their families. The song features David’s melodic singing in the chorus paired with statements from people that work long distances from their homes. “It’s Hard To Understand” has very powerful lyrics that need to be listened to to fully appreciate and a message that needs to be heard. The album also includes the hit song “No Pressure” featuring the one and only Snoop Dogg, and “Noah’s Ark”, both of which were available prior to the release of the album.

Overall I was very pleased with the album. His previous album was very successful and I thought that it would be hard to follow but Classified has proved himself once again. Out of all the songs on the album, “It’s Hard To Understand” is one that I would suggest listening to first – it gives you a sense of the type of lyrics he writes if you hadn’t heard his music before. It has a very powerful message that a lot of people in this day and age need to be reminded of. ‘Greatful’ is an album that earns its title and is sure to be yet another hit for the Nova Scotia rapper.