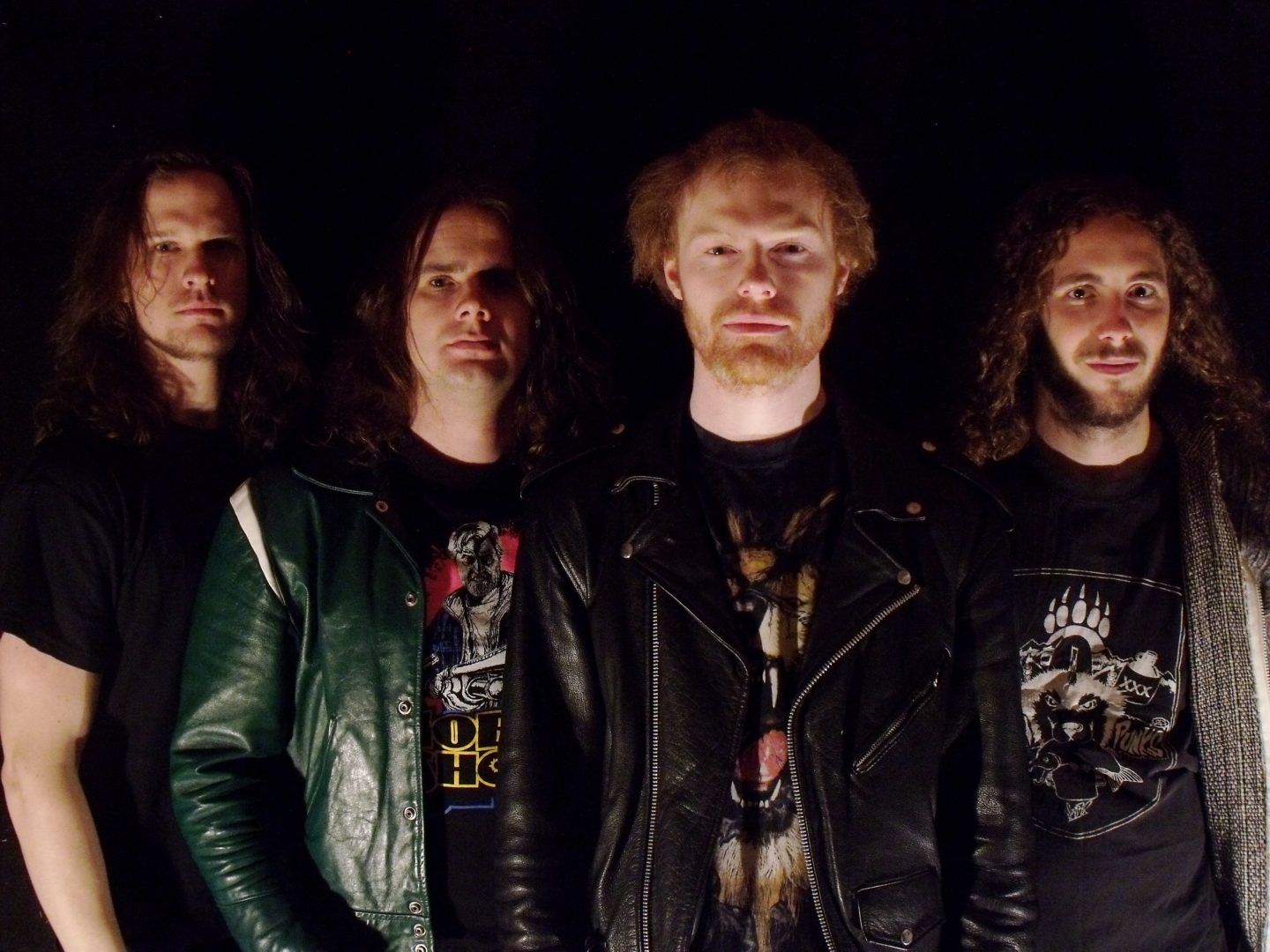 Sanktuary are back from the frozen depths of northern Canada with a new self released album, appropriately named ‘Winter’s Doom’. After thrashing around Canada for the past six years Sanktuary will unleash hell on January 22nd, so I had to grab their attention and get the low down on the plans in the works for the new year.

Did you enjoy your holidays?

Right. Oh fuck yeah. The holidays were great! It’s nice to get together with family and friends and eat good food and drink good liquor. Santa was pretty friendly this year as well. It’s funny how socks are such a let down present when you’re a child. Then you grow up a little bit and can’t wait for Christmas so you can score some fresh new socks.

What does Sanktuary do for the holidays, do you even celebrate them or are you to busy being an awesome band?

Nahhh we ain’t no Grinches! We just do the same shit over the holidays as everyone else. Eat, drink, bonfires, get on some ice. Fire a couple of pucks around and a few beers into our bellies. Anders is great for playing shinny with because he’s a goalie.

We didn’t actually end up hanging out this year until new years eve. Everyone was busy, and off doing their own shit. Glen was down in Las Vegas. Anders just rolled back into town on Dec 23 so he was tied up with his girlfriend and family. Cole lives in a tiny little cabin about 20 minutes out of town where he practices his black magic arts and I haven’t seen him much since he moved out there.

What is it like to be a metal band in the Yukon, and what is the music scene like?

The metal scene is currently pretty dead up here. There are lots of people that like metal and will go to shows but there is a major lack in the number of local bands that play metal on a regular basis. When we were in high school there was a larger number of bands that would do shows and as a result the scene was bigger and stronger. Over the last 5-10 years it has shriveled up pretty hard. Local favorites Nemesis stopped playing shows, Bushwhacker moved to Vancouver, we moved to Halifax for a few years. The scene just slowed down. But there is definitely a burning ember in the heavy metal stove of the Yukon that is lurking there, waiting to fed, so that the metal flames may one day rise up in glory once again. There is a new high school band called Warmoth that have started doing shows, so that’s a positive sign. I haven’t checked them out yet but will when I get a chance.

Can you quickly recap the bands history for people new to Sanktuary, like how did you become a band etc?

Yeah, it all started in high school really. Anders and myself started jamming when we were 15. Cole also went to our school and got in on the debauchery a couple of years later. We were absolutely fucking terrible at playing music but it was fun to get boozed up and try and emulate the songs of our heros. We met Glen at our first ever show. He was in the audience. We were looking for a second guitar player at that point and I’d heard he was pretty good and he was into bands like Judas Priest and 3 Inches of Blood. We had him out for a few jams and it felt pretty fuckin good right from the start, so we snapped him up. This would have been 2007/2008 at this point I think. Anyways, we started doing shows around the Yukon. We recorded a couple of demos in 2008 and 2010 and then having a desire to play in front of new crowds, we packed our shit into a van and moved 7000km across the country to Nova Scotia, while doing shows along the way. We were in Nova Scotia for three or four years and loved every bit of it but we recently made the decision to return to the mountains of the north. We are mountain people who play mountain metal. I can’t speak for the rest of the band but for me this is home.

Tell me a little about the new album, what can fans expect?

Compared to our last album, Something Fierce, I would say that the new disk is less cock rock and more thrash. It’s more in tune with our roots, our old demos, but with a little bit more experience in the song writing and musicianship. It was also nice to have Glen back in the studio seeing as he was not on the previous album, except for a guest guitar solo. He adds some awesome elements to our sound.

Green Needle Records, just outside of Whitehorse. We were spoiled fucking rotten in that place, what an amazing studio! Jim Holland runs the show and does a hell of a job. I would highly recommend him.

Is there anything that differentiates this album from your previous releases?

Not that I’m aware of. It’s just the same old disgruntled Yukon boys, laying down some stinky riffs and solid beats for all to enjoy.

How did you choose the single?

Space Race was the song that jumped out to most of us as being catchy and able to pull in some new listeners. We all decided as a band, as well as with our publicist, Jon Asher. It’s also the opening song on the album.

Your album artwork is pretty bad ass did someone in the band design it?

Anders’ older brother Tyler Grasholm drew it. We’ve worked with him before and he kills it. All we told him this time around was that we wanted a raven picking away at a frozen corpse and he did the rest. We’re happy with how it turned out!

Is there a concept to this album or is it a straight-forward thrash assault?

No, I wouldn’t say it’s a concept album. Just the latest batch of tunes that were molded and blacksmithed together by the skank squad. I’m not sure if a concept album is in the cards for Sanktuary.

As of right now we have nothing lined up. I’m busy with school and the other dudes are busy with life. But we may end up getting down south for something quick this summer, possibly through BC and Alberta. We’ll know more in the next couple of months.

If you could build a touring line-up who would you take on the road with you?

Oh damn, that would be a dream come true. Off of the top of my head I would pick something like this:

HAVOK EVILE – Enter the grave era SODOM 3 INCHES OF BLOOD SANKTUARY Thin Lizzy at their prime would be awesome to add to the bill as well.

Besides the obvious what other plans have you got for 2016?

I’m going to shoot a moose and try not to lose my cellphone every time I drink. I’m going to try and do well in school and play lots of hockey. Right now we have no major plans, which is nice for a change. Sanktuary is going to just relax, start writing some new riffs and see where the future takes us.