Interview – A Dream, A Coast 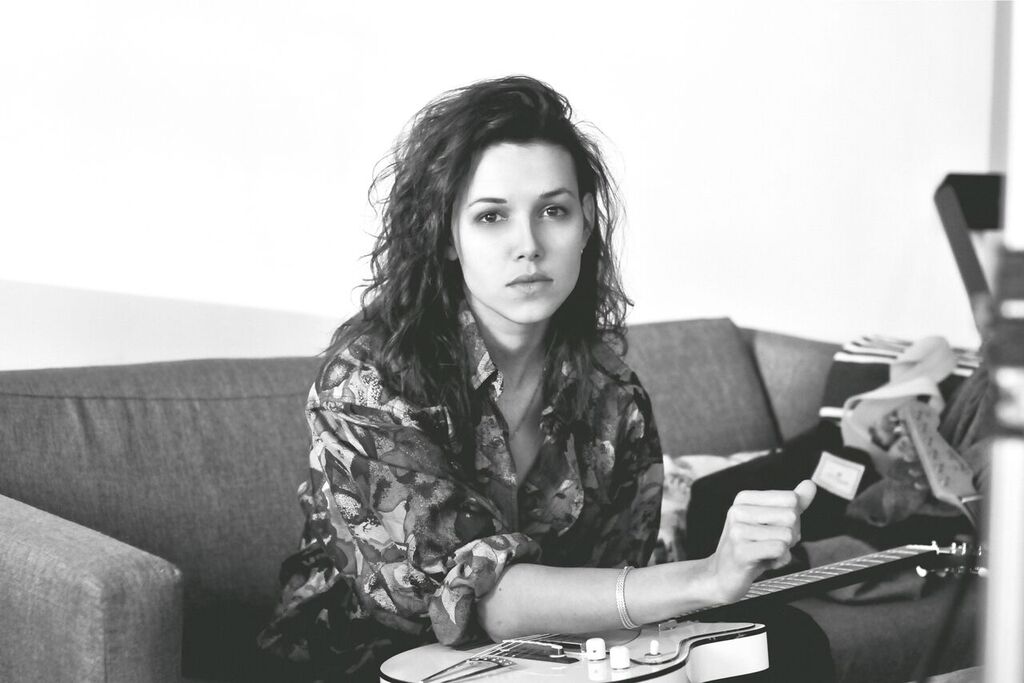 A Dream, A Coast, is made up of a solo artist by the name of Aimee Bessada who is currently based in Toronto, Ontario.  Her sound has a touch of 90’s, but I also hear a hint of 80’s influence in her music as well.  We had the chance to ask Aimee some questions recently.

Tell our readers a little bit about yourself, for those who may not have had the chance to hear you yet.

A Dream, A Coast is the title of my solo project I started after appearing on VH1’s The Linda Perry Project. I spent a few years playing lead guitar in a couple of bands before realizing I wanted to write and perform my own music. As far as a little about me? My obsession with music is only rivalled by my obsession with movies. Especially bad movies that are actually incredible, like Showgirls or Face/Off. There was a Nicholas Cage marathon on tv today and I had a hard time tearing myself away.

Upon my first listen of your single “The last to know” – your name seems to go well with your sound, but where did the name “A Dream, A Coast” evolve from?

The name “A Dream, A Coast” was originally the title of the song now called “Culebra”. We (Linda, Laura and I) spent months texting back and forth names that I could perform under. I didn’t want just go by my own name. It was tough to find something we all liked that also wasn’t taken. The title of the song “A Dream, A Coast” is one of my favourite titles I’d come up with, it was perfect for the song but I realized it felt better to sit under that title as an artist.

I see you have toured with some other bands previously, do you hope to get out on the road yourself with this EP?

I would definitely love to tour this EP.  I’m hoping to get on the road in the first half of this year.

What prompted you to go out on your own and do solo work?

I spent a few years playing lead/back-up vocals in a few bands but I was always composing. However each band I was playing with had already written the songs they were touring when I joined so I wasn’t lending any creative input to the music. When I went on the Linda Perry Project with Hunter Valentine I never thought I’d quit the band during filming. But the situation was a bit like a pressure cooker and accelerated a decision I think I’d already been gearing up to make which was to start performing my own music that I had been creating.

What were the main influences on this first EP?

I listen to a really wide range of music, and I’d like to believe that in some way everything you take in to your ears somehow trickles down into the songs you end up writing. And each song really has a bunch of songs that influenced the final product. To specifically name names: Elliott Smith, Tom Petty, The Church, Sheryl Crow, HAIM, Weezer.

Can you tell me what the writing process was like, and how long did it take to fully form?

I wrote the songs while I was apartment hopping in New York. Month to month I was changing locations and it sort of worked out that each song was written in a different room. That’s how I organize them in my head. 6 songs. Four apartments. I wrote all the demos using GarageBand. A direct line from my guitar into my iPad and the iPhone earbuds with the mic input to record vocals. Some of those original vocals are on the EP. Then I “wrote” the drum patterns note by note. When it came to recording them professionally in Linda’s studio, for the most part we sort of “traced” over the digital drums and bass with live musicians and re-did some of the vocals and guitar.

I see each of the songs very distinctly because of the way they each came about in those different apartments. Like they each have their own genetic make-up but they’re part of the same family.

I saw that you toured with Cyndi Lauper, tell me about that experience.

Touring with Cyndi was a great experience, and a really fantastic way to get an idea of what kind of goals I wanted to set for myself as a musician in the near future. Getting to play venues like the Greek in LA, the Beacon Theatre in NYC, and Massey Hall here in Toronto….I felt really lucky, but I also remember it feeling so comfortable. I’m sure I was nervous for a couple of those shows but for the most part I just felt like I was in the right place.

At what age did you know you wanted to be a musician, and what did you start out doing? singing, or guitar?

I had a fascination with guitars since I was a kid, maybe 4 or 5. But back then it was a purely physical thing haha. My parents bought me toy guitars and I had one from a department store but I didn’t learn how to play until I was fifteen and my uncle handed me a tab of Wonderwall. Before that I thought the only way to learn was with sheet music. Luckily, after not quite mastering Wonderwall I moved onto Radiohead, Led Zeppelin and the Stones. But I always sang, in the church choir and at talent shows as a kid. But I didn’t start singing and playing my own songs until I was 17. But I was going to University then and thought I would go into medicine or something academic. One night I was playing songs around a campfire with some friends (probably Wonderwall) and this guy heard me sing and asked me to join him for a few songs at a residence he had at this pub in Toronto. He played way too much Jack Johnson if you ask me but he let me sing a few of my own songs and after that I was pretty hooked. I started to focus on writing music and moved away from academia. I finished my degree but within a year of graduating I was on the road touring with a band in Europe.

I really enjoyed listening to the song Culebra, can you tell us more about it?

I’m glad you like it! As I said “Culebra” was formerly titled “A Dream, A Coast”. That song was written in apartment three, which was a big empty loft in Greenpoint. I had fallen for someone who, at the beginning, felt like they were going to be “it” for me. But it didn’t work out and I feel like Culebra was a way for me to deal with the disillusionment that comes after you realize that even though all the signs told you something was written in the stars (or another cliche of your choosing), that it doesn’t matter and you can be wrong anyway. In the narrative of the song it’s about two people who were childhood friends and the “you” in the song has grown up into a cold and distant person, but the singer, who has always been in love with them, can’t shake those feelings – even though they don’t even like the person anymore it seems.

I see you lived in New York previously, what prompted the change to Toronto?

But seriously, my Visa ran out and so did my money so I had to move back to Canada.

I’m still writing. I’ve written another five or six songs I’d love to put on a full album but for the moment they are still in a demo phase. But hopefully I’ll get out on the road soon and start seeing how the songs land on a live audience. I’ve played them with a full band once and it was really great but they definitely had a different character to them so it will be interesting to see how they change when I start playing them live consistently.

I also plan to solve the riddle of what happened to Nicholas Cage’s career in the mid to late 2000’s when he started doing terrible movies that are actually terrible. I’m looking at you Sorcerer’s Apprentice.

What is your favorite colour?

What would you say is your most listened to song these days?

Probably any one of the Justin Bieber trilogy songs: Where Are U Now? What Do U Mean? or Sorry.  Not by choice. But they’re everywhere, and so damn catchy. I’m also heavy into an artist called Shura. Her music is so perfectly constructed.

Do you prefer cats or dogs?

I really love dogs and I want to have one someday, but I have a cat named Stevie right now and she is my child.

City, with always the possibility of a country escape.

What was the first concert you ever attended? would you see them again?

My first concert was Weezer on my 16th birthday and Dashboard Confessional opened for them and it was so awesome because they were pretty much my two favourite bands at the time and no I would never go see either of them again!!!

Check out the video for Last To Know: