By Remington Fioraso on January 4, 2016@https://twitter.com/RemingtonFD 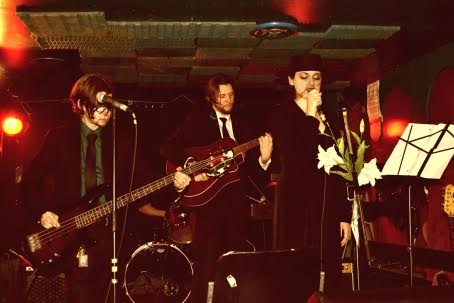 Ben: The great “death” records, REM, Eels. Also Cliff Martinez’ Solaris score for texture. Weirdly, a lot of dance music, not that it would be terribly apparent. A little bit of everything.

Mike: Everything from Erik Satie to Ministry, Wu Tang to Failure, Parliament to King Crimson, TAD to Kyuss, Local H to The Four Tops and a little bit of Aphex Twin

Anna: It all technically started when I saw Mike walking into Hardluck Bar wearing a stupid hat…

Ben:  Mike’s been my best friend since high school. I met Anna through him and immediately thought she was amazing. Shane and Cyrus I met through playing shows with each others’ bands for years. When this project came about, it was all about getting people who were friends first, but also artists we hugely loved and admired.

Mike: I met everyone in different times in my life.  Ben, when I was still young and a loser. Shane and Cyrus when I was way older and still a loser, and Anna when I was a bit older than that, but a bit less of a loser.

What led to the group being called ‘The Dearly Bereft?’

Ben: It’s actually from an Eels lyric. I’d been sitting on that as a great band name for years, and when we started writing these songs with this theme, it was the perfect fit.

Whom or what are your inspirations for writing songs?

Ben: For this album, the loss of my father was a big impetus for writing songs about loss and mortality. In a more general vein, i’ve always written in a very “portray a mood” kind of way, but for this it was more about incorporating more straight-ahead storytelling as well.

Mike: I think Ben and I drew inspiration over the course of quite some time.  Dealing with loss in one form or another was a big one, as we took adversity and used it to create something positive and hone our musical skills.

Shane: My grandfather was a concert pianist, my mother was a musical prodigy, my father played trumpet and toured Europe, my brother was an amazing drummer. Nirvana when they played SNL in 91.

How was the recording experience for Funeral Music?

Anna: Totally out of my realm since I had never done it before, so it felt partially thrilling since it was totally new to me, and terrifying because I had no idea what I was doing. But the band helped me push through with lots of support and guidance, and wise words.

Ben: It was the best i’ve ever been a part of. Shawn Hook-Carleton produced the record, and just totally saw eye to eye about our “everything but the kitchen sink” approach. We took the time to try everything we could think of and see what worked.

Mike: It really seemed to have a natural progression to it.  After the initial base to the songs, they kind of wrote themselves. We all had an idea of what we wanted to add, and it worked out perfectly.

Shane: It was tense. A lot of confusion as to what our sound was. Concerns about intentions/directions. Fast friends with Shawn (producer), realization the band was special. Happiness.

Were there any songs that stand out for you whether it be performing them live or during the recording of Funeral Music?

Anna: Some Devil is pretty special, when it first came together during recording we all collectively felt gripped by how magical it sounded, I can’t put my finger on it quite yet, but it’s a special song.

Cyrus: Some Devil & So It Goes

Ben: When we finished “Some Devil”, we had a moment of “wait, we wrote this…?” We’ve always been in punk rock bands, so making this and it turning out so lush was a moment of total pride.

Mike: I really enjoyed recording Laura Palmer and Asleep at a Wake.  I got to experiment with some guitar tones, and make some pretty interesting melodies I haven’t been afforded the opportunity to create with other musical endeavours.

Shane: Some Devil was instantly a special song for me after recording. So It Goes is always a big one live.

Ben: Atmospheric. What we lack in high-tempo energy we try to make up for with dedication to mood. Also, projectors showing Twilight Zone episodes helps.

Mike: Well, we’ve only played a few shows so far, but I would say a unique and ethereal experience.

What were your favourite moments as a band of 2015?

Ben: The CD release show. Having people hear what we’d been locked away doing for months, and the huge amount of support. We had it on dad’s birthday too, so it was a nice full-circle moment.

Mike: My favourite moment would have to be the overall progression and how far we’ve come over just half a year. It’s a pretty big accomplishment for us so far. Not a moment, per se, but whatever.  I can answer however the hell I want. Oh, and seeing something I helped create on vinyl.  That was a bucket list item, for sure.

What are you looking forward to the most for 2016?

Ben: The next record. I’m thinking “Boards of Canada covers the Motown catalogue” as a jumping off point.

Mike: Focusing on perfecting our live show, and then writing some new music. As well as releasing a collaborative remix effort from some artists in the community that we respect.

Shane: The remix record (friends remixing songs from the record) slated for the new year. Out of town shows, be a great friend, continue to make challenging music.

What are your New Year’s Resolutions?

Ben: To keep “making noise for us.”

Mike: To not adhere to archaic, fruitless, attempts at self improvement.

Ben: I am a superfan of Matthew Good. I think he’s one of the best writers… well, ever.

Mike: Skinny Puppy, Neil Young, Killjoys, Rusty,  Big Wreck, Honeybeard, Selfoss, DD/MM/YYYY, .  The list goes on and on.  There is a ton of Canadian talent.  A lot of which nobody has even heard of.  Get out and go to live shows.  You won’t be disappointed.

Ben: Do what you love, and do it without limits. Don’t be boxed in by genre or category. Blah blah blah, it’s cliché, but it’s true. Make some art. It’s not hard.

Mike: Shit.. we have fans? I suppose I would have to say.. support local music.  Don’t just act like you do.  It’s important.