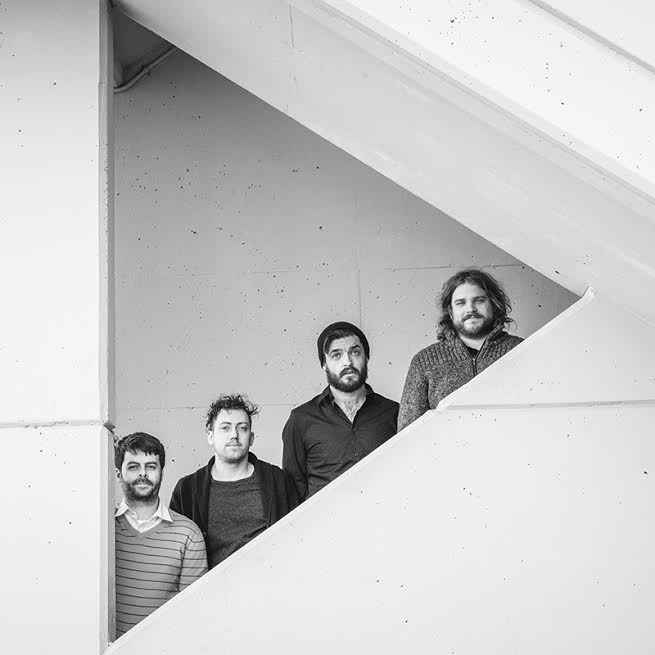 I had the privilege of seeing Halifax, NS based band Floodland at Nova Scotia Music Week in November, and since then, I can’t get enough of them. I decided that Canadian Beats had to feature them, so when lead singer/ guitarist, Aaron Green agreed to an interview, I was over the moon! Be sure to check out what he had to say, and keep an eye out on their socials, as you’ll want to keep up with these guys!

It all started when Eamonn Slattery and I met while studying music at St FX. We moved to Halifax after graduation and for a while it was just the two of us, writing songs and recording all the instruments and vocals ourselves. We had some musicians who played with us live with but it wasn’t necessarily a ‘band’ until we added Jordan van Deudekom on guitar and Lauchie Headrick joined on bass.  Later, Luke Levy replaced Jordan on guitar.

Where did the name Floodland come from?

An interview we saw somewhere with Hunter Thompson talking about geology.

You released an EP back in April, how was the response?

The response for It’s the Fire was really encouraging. The video for the first single, Old School, helped a lot I think. It’s a pretty heavy song but still has a hooky shout along chorus and some response parts in the verses. We made a lyric video with the band performing in the background and then we started to notice everyone singing and shouting the lyrics back to us on stage. The resulting radio play really helped bring people out to the live shows.

When can fans expect a new album or EP?

We’re heading to Toronto in the spring to record a full length record with Gavin Gardiner and we’re really excited about it. It’ll be ready for release in mid 2016. We’ve never worked with a producer or been removed from the engineering before so it’ll be a nice change. We’re really looking forward to being able to focus on getting great takes, moods and sounds. In our previous recordings, we’ve been heavily involved in every step outside of the performing from engineering, mixing and mastering. It becomes hard to balance all the technical side of things with the performance side of things in the studio. We really just want to focus on presenting the songs the best way possible and playing our instruments.

We tend to each write separately and then bring the sketches of songs to the rest of the band members for fleshing out.  Once we get something everyone’s into, we demo the songs out and finalize all the parts. The demoing really helps figure out the intricacies and harmonies. Then I finish the lyrics. Lately, we’ve been writing a lot of material using loops and drones and programmed beats and then figuring out how to capture the same effect with our instruments. We’re always looking for different ways to get out of our comfort zone and create something different.

Who would you say are your main musical influences?

The Beatles, Radiohead and Wilco are the biggest three influences for us. There is a ton of other stuff we listen to and we’re always seeking out new music but everything seems to find it’s way back to those three someway or another.

Do you have a favourite song to perform from the EP?

I really like performing Mountain. The heavy guitars and belting vocals are a lot of fun for me. Then the song descends into noise and chaos, which is great because it’s a little different every time it happens and can really get spontaneous. We usually play it as a set closer so it’s a nice sendoff. Just saying “We’re Floodland. Goodnight!” while all the amps are feeding back and the loops are crashing into each other is a good way to exit the stage.

You were recently at NSMW in Yarmouth, what was the highlight of the weekend?

You performed at the same showcase as many other great Nova Scotia bands, such as Wintersleep, The Brood and Dance Movie, how was that experience?

It was great. We’ve played with the Brood and Dance Movie before and they are fantastic bands. Wintersleep has been a favourite band of mine since I was living in Antigonish and I used to go see them play at Chuggles. We were really pumped to get to play a couple of showcases before them at NSMW.

Speaking of Nova Scotia talent, who are some NS based bands you would recommend to your fans?

Right now, I’ve been really into the new Quiet Parade stuff. Roxy and the Underground Soul Sound are one of the best ways to spend a Friday night. I saw Beauts and Brinleigh at NSMW for the first time and was really impressed with the songs, sound and stage presence.

Do you have any upcoming tour dates or shows that fans can look forward to?

We currently don’t have any shows planned until sometime next year. We’re taking a couple months away from gigs to concentrate on getting all our new material ready. Taking a break from making music to make music I guess. We don’t get much writing and arranging done when we’re travelling or preparing sets for gigs so to really focus on making the record we want, it’s helpful to be well rested, comfortable and never too far away from our demoing basement

What’s up next for Floodland?

Demoing and recording then all that fun non-musical stuff that goes along with putting out a record.

Our Lady Peace on the Clumsy tour.

Thanks for listening to us and coming out to shows. We’ve been working really hard on the new stuff to make our best work to date. We’ll see you in 2016.