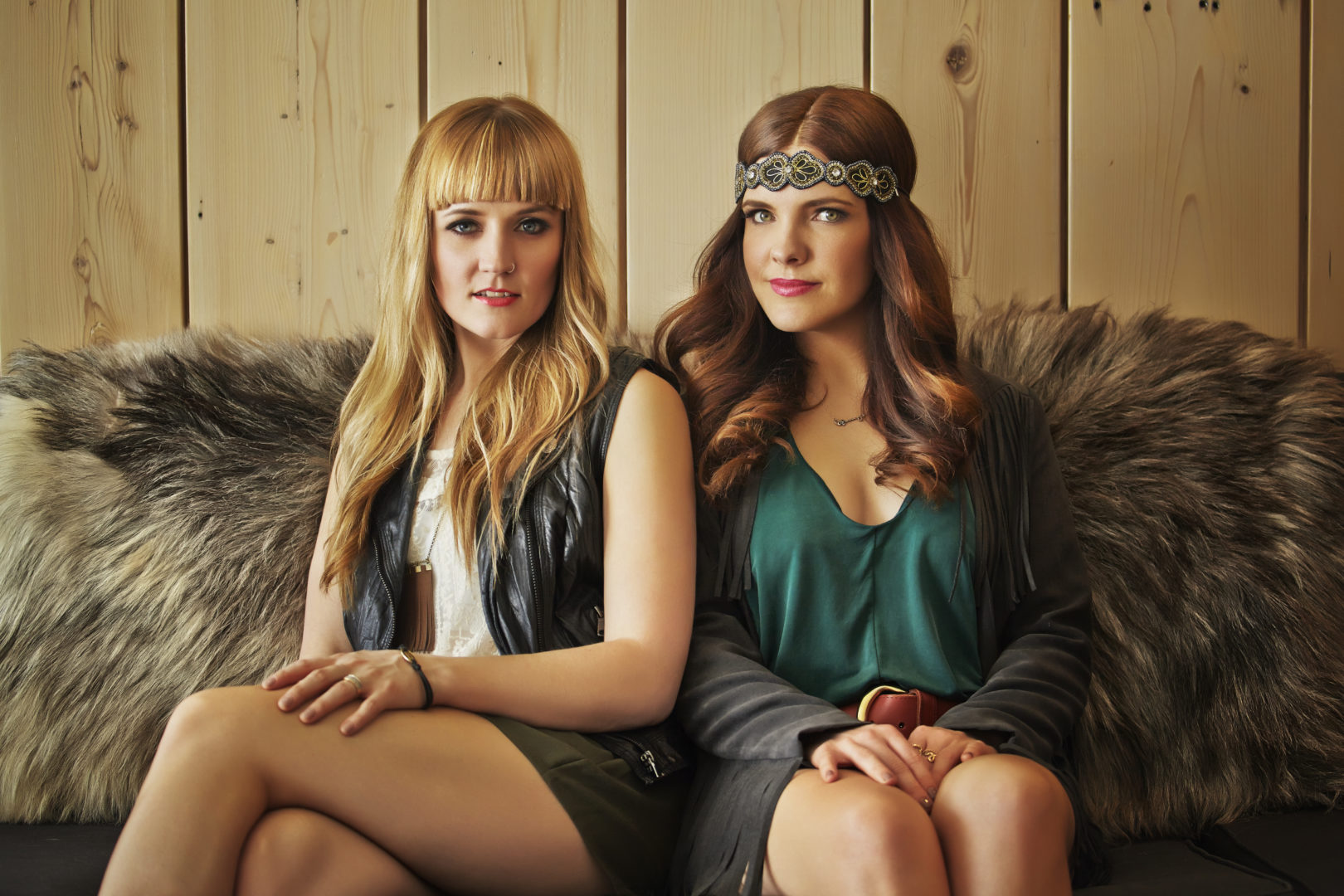 I had the chance to ask these two rising stars a few questions, and now I am pleased to present you with Canadian Beats first official interview with The Lovelocks.

How did you meet and form The Lovelocks?

We met about ten years ago singing in church! After seeing each other up on stage, we quickly became friends and discovered that at one point we had both dated the same boy (although not at the same time – scandal!). Our friendship was signed, sealed, and delivered when we realized that we had both dumped that boy (!), and that we truly had so much in common, most notably our shared love of music. We definitely got the better end of the deal – a new best friend!

We then started to get frequent invitations to sing together at local events, friends’ weddings, and community fundraisers just as Ali & Zoe. Our calendar was booking up, but we didn’t officially have a band yet, or even original songs to sing. We decided to start working on some songs together on Sunday afternoons, and after a few writing trips to Nashville and local residencies in famed Toronto music venues (C’est What, The Cameron House etc.), The Lovelocks were officially born! We were fortunate enough to sign a record deal with MDM Recordings/Universal Music Canada shortly after.

How was the name The Lovelocks chosen?

We had gone back and forth trying to choose a name for months. One night in 2011, Zoe was over in Europe nursing a broken heart, while taking in beautiful scenery and crying into many delicious glasses of french wine. Ali was at home in the west end of Toronto, scrolling through Twitter and came across an article about lovelocks being removed from the Humber River bridge. The Humber River is literally in Ali’s backyard, so the article peaked her interest. But what the heck is a lovelock?

Ali clicked on the link and discovered that a lovelock is a padlock that two people lock onto a bridge to signify partnership, commitment, love, and going on an adventure together, and then they throw away the key into the river. It was kind of the perfect metaphor for our friendship, and the journey we had decided to embark on together as a band. Ali texted Zoe right away – “What about The Lovelocks?”, and Zoe immediately responded back with a photo taken of her in front of Paris’ iconic lovelock bridge from earlier that afternoon. We had both discovered what a lovelock was on the exact same day, and we knew pretty much immediately that this was to be our name.

You released your debut EP in 2014, when can we expect a new release?

Very soon! We are super excited to be releasing our next single off in the next month or so, and the record will follow in Spring 2016!

“Born To Love” is your newest single, which was released earlier this year, can you take us through your writing process?

Ali had the song idea come to her after getting off the phone one night in Nashville. It’s always hard to be away from loved ones when you’re on the road, and sometimes you have to figure out relational issues with your significant other long distance over the phone. This concept of being born to love someone, and that you can truly get through anything when two people decide to love each other and support each other’s dreams was resounding loudly in Ali’s head, and she had the title as soon as she hung up the phone.  Zoe was in the other room getting ready for bed, and Ali brought in the guitar and sang her the riff.  Zoe loved it and we decided to bring it into a writing session the next day with two songwriter friends, Phil Barton and Brian White. We wrote the song together in an hour. We’ve never written a song that quickly, and so we knew we had something special!

What was the highlight of your video shoot for “Born To Love”?

Honestly, I think we can say that the entire day was the highlight. It was our first major video shoot with a budget, 35 crew members, catering, dancers, a full production team and an award winning director (Amit Dabrai)! It was crazy to look up and see all of these people working so hard on our behalf. They were there simply to help us make the best music video possible, and after working so hard for so many years just the two of us, it was amazing to have this incredible team around us. They did such a great job, and we love the final product of the video!

You were nominated at the CCMA Awards for Roots Artist of the Year in 2014 and 2015, what is it like to be nominated for such a big award?

Don’t think we’ll ever get used to it. That feeling of being elevated by your peers in the industry, seeing your name on that ballot, it truly is the greatest feeling. We also secretly (or not so secretly, now!) feel that the Roots Artist category is where all the cool kids hang out, haha!

How did you enjoy Halifax?

We love Halifax! We got to spend an additional week on the coast following Country Music Week, as we were doing a whole radio tour down east. We love the Maritimes, and the people are just the friendliest, most hospitable you’ll ever meet. We can’t wait to go back!

What was the highlight of Country Music Week 2015?

Coming back to play the Discovery Showcase, which we won in 2014. That was truly a highlight. Oh, and playing our record label’s party after they had just won Record Company of the Year. Now THAT was a night to remember!

You have a show coming up with Jess Moskaluke at the Phoenix Concert Theatre on December 10, what can you tell us about your live show for someone who has yet to see you perform?

We are excited to be opening for Jess, who is our label mate and dear friend.  We guarantee that December 10th is going to be an awesome night of country music in the big city. Fans can expect our set to be super high energy full of soaring vocals, sweet harmonies, and sultry strings! We love playing live and cannot wait for this show in our hometown of Toronto. We might even take the subway there. 😉

Do you have any other upcoming dates you’d like to tell us about?

Well, we got the really terrible news not too long ago that we’ll be playing in the Bahamas with Chad Brownlee, Jess Moskaluke and Bobby Wills at the end of January to perform as part of MDM’s second annual Exuma Unplugged!   It’s going to be really tough, but someone has got to do it!!! 😉 But seriously though, fans can come too!  There’s a promotion going on all of our social media channels, which country music lovers should check out if they’re looking for a musical holiday getaway in the dead of winter.  People can contact Anisa at the Grand Isle Resort & Spa (anisa@givexuma.com) to access MDM’s special rate.

The Weeknd has been on both of our playlists all summer long. But we’re also huge fans of the Bros. Landreth, Dean Brody, Lindi Ortega, and Kathleen Edwards.

Here at Canadian Beats, we like to include a portion of question that may help your fans learn something new about you, so here goes:

Ali – Haha, this question is hilarious, mine was Offspring back in ’98 or ‘99. Pretty Fly For A White Guy. Yup.  Oh how my tastes have changed!

Zoe – Lilith Fair! I was young – but I remember being so blown away by the female talent on the roster, from The Indigo Girls to Sarah McLaughlin (she was my girl crush at the time).

Is there a musical instrument that you have yet to learn that you would like to learn?

Ali – I think I would love to learn the harp. It’s totally not relevant to our music, but I just think it’s probably the most difficult instrument to play, and it’s absolutely the most beautiful. I like to set challenging goals for myself, and oh my, that would be a challenge!!

Zoe – I’m going the opposite. Gimme a ukulele – the simplest instrument on the earth! Or maybe even the cowbell 😉

What is your all-time favourite Christmas song?

Ali – This Christmas by Donny Hathaway or anything Bing Crosby. Cue all the festive feels.

What is your go-to cover song?

We love covering the Dixie Chicks, who were both a huge inspiration for Zoe and I growing up. We do “Landslide” a lot in our set as a bit of an ode to them.

With winter approaching quickly, what is your favourite outdoor winter activity?

Ali – Probably tobogganing, although I don’t do it that much as an adult. I feel like I need to resurrect this tradition with our friends!

Zoe – I love downhill skiing and snowshoeing! So fun!

What about your favourite hot beverage?

Zoe – Gimme a mint hot chocolate (with marshmallows, of course)!

Ali – My guilty pleasure is reality TV, the more dramatically over the top the better! Next Top Model, The Bachelor, The Bachelorette, The Biggest Loser… you name it, I love it all. I know it’s arguably the worst programming on television, but I just can’t look away.

We can’t wait for you to hear our new music!! 2016 is going to be a fun one with lots of new stuff from us and tons of shows. Looking forward to seeing you on the road!