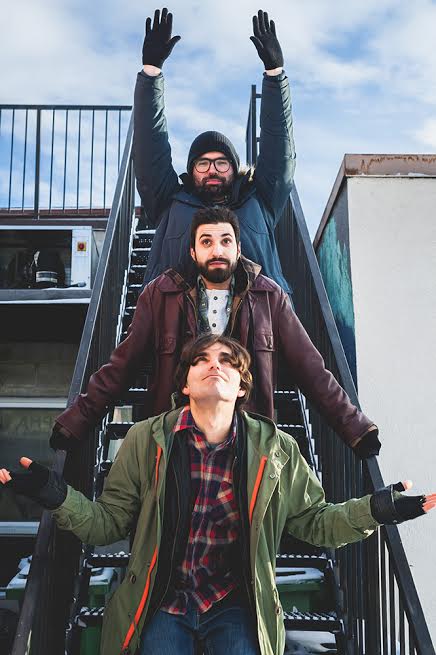 Toronto based band Hormoans are bringing back garage punk in the best way. With album “Slander” and first single “Made of Stone” catching the attention of music lovers across the country. Here at Canadian Beats we had the chance to catch up with them to chat life and Music.

What inspired you to pursue music as a career?

Steve – Everything changed for me when, in grade 5 when I was delegated by my peers to sing a high-art, punk inspired version of “farajaka dor me vou” – since then music has always been a big part of my life. In today’s economy, it sometimes feels that such a brazen career path is actually not so crazy, seeing how competitive and machine-oriented everything is now. Music is fluid and organic; choose it as a career and expect a lot of ups and downs… but if you have the passion to not live as a robot, I say why not.

Matt – Career? I don’t really see it as a career, for me it’s more of a fun thing to do with my best friends rather than a “job” but I guess what inspired me to pursue music was the music. The making of the music, the idea of creating something from nothing and having people enjoy what we’ve created. Listing to other bands music, whether it be a local band or an accomplished artist always has inspired me.

Cyrus – Music has always come naturally.  Anyone who can make a living off their art is lucky.  Career is a stretch, but if we made no money at all, I’d still be writing and playing.

Tell me about your writing process. Where do you get most of your inspiration?

Steve – Our writing process varies: sometimes I’ll bring in a finished song or guitar part and then Cy and Matt will start developing a solid rythem section that generates its own melody, something my vocals can sit nicely on top of. Other times the main riff/melody will come out of a jam session – we’ve started working on new material which is actually a lot more about experimenting with minimalistic sounds and stripping everything down which I’m really excited about. As for the inspiration, it’s akin to Seinfeld: the songs are about relationships, you know, the people within our lives, but at the same time, they are about nothing. The nothingness of everyday existence and the need to find meaning within it.

Matt – I get inspired when we jam together, sometimes I’ll have an idea for a song but when we practice and I bring that idea to the table it can change dramatically, in a good way. Steve will add something totally different than what I was thinking and it will change the idea and inspire me to go a different direction. Cy will lay down a beat and it normally comes together after that.

Cyrus – For beats, I’ll record anything inspiring and save for the boys.  I also will sit at my piano for hours and write for fun.

What does success in a garage punk band in a bubble gum pop era look like?

Steve – As we venture through the ruins of today’s music industry, I can’t help but think that, success can be found through persistance. Simply existing as a musical/performance based unit these days is a form of success.  Over the years, our DIY ethic has grown incredibly strong and nobody tells us what to do; we make music on our own terms, without any outside interference and I think there’s something to be said about that. The homogenization of radio, and now television (netflix) is a symptom of a greater evil lurking; society’s tastes have become universally commodified and its up to the artists and musician’s of this world to act as true artistic warriors in our counter-culture pursuit of the truth and all that is pure and good.

What advice would you give  those kids dreaming of a career in music?

Matt – Don’t believe everything you hear or read, trust your friends and have fun, and never stop writing.

Cyrus – Other’s may criticize your musical style – take it as a unique compliment and keep pushing until you play that one live show where everything makes sense; then chase that feeling.

What’s next for Hormoans? Can we expect a tour?

Steve – After the release of this new record, “Slander”, we have been playing a lot of shows to support it and started getting out to different places around the GTA. We met a lot of great people. For example, a promoter named Blaine in Toronto, who sadly passed away recently, revived a certain kind of comradery amongst the bands and promoters in this city; he was a prime example of how the best results always come about from working together – not against each other. So yes, I believe we do plan on touring the west coast in 2016.

Matt- What’s next for Hormoans is something I think we ask ourselves all the time. We’re starting to write new material and changing our sound a little to stay fresh and to also keep things from going stale. I think that’s important for bands like us. 1: because no one wants to hear a band pump out the same songs over and over again. And 2: because it keeps the creative juices flowing. As for touring, you’ll just have to stay tuned.

Here at Canadian Beats we like to include a just for fun portion as a way for your fans to get to know you better…Ready?…

What is on your personal playlists? Anything that would surprise us?

Cyrus – Beatles, The Strokes, At the Drive in, Daniel Johns, way too many to count.

If you could collaborate with any Canadian artist or group, who would it be?

Matt – Dance Electric (if they were still a band)

Cyrus – Bieber (Let’s change his style a little, get instantly famous and then kick him out of the band with a note in a cupcake.)

Steve – The Tea Party/Econoline Crush at the Guvernment in ’97 I think.  Or was it Rusty..

Cyrus – Edgefest in the 90s

What are three things non music related that you couldn’t live without?

Matt – My Movie collection, My phone, and a Grilled Cheese Sandwich

If you could spend the day with anyone, dead or alive, who would it be? And why?

Steve – Robin Williams. Because he could have entertained me for days straight.

Matt – Kim Kardashian so I could tell her to stop….just stop.