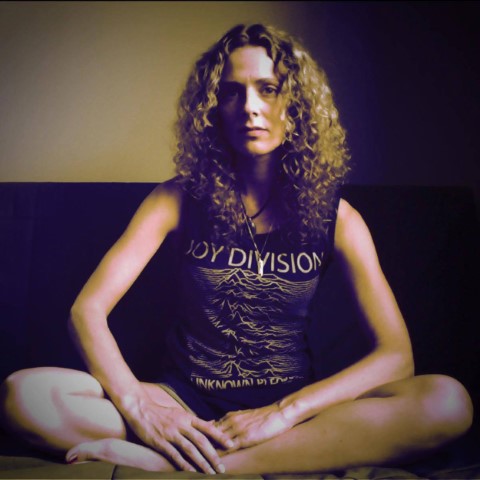 Montreal, QC based singer-songwriter, Gaëlle Bellaunay, otherwise known as Kensico released an album earlier this year entitled “White Sage” and has just released a brand new video for the single, “My Love That Never Was”, which you can see below. We had a chance to ask Kensico a series of questions and now it’s your turn to see what she had to say!

At what point in your life did you realize you wanted to pursue music as a career?

I’ve been singing my whole life. I studied the piano as a child and teenager, and started singing in bands and writing songs when I was 14. From there, I never stopped and was a professional touring musician by the age of 19.

Who have been your biggest musical influences through the years?

Many different people, from Nina Simone to Led Zeppelin, via Joy Division, Patti Smith, Joseph Arthur, Wovenhand, Pascal Humbert’s own project called Lilium (stunning ), Howe Gelb, Townes Van Zandt, PJ Harvey & Elliott Smith for instance… You know, all kinds of music… But I would say that for the last decade or so, I’ve been quite obsessed and haunted by Mark Lanegan’s music and voice, which led me to meet and collaborate with Mathias Schneeberger, Chris Goss & Alain Johannes in the process of writing and recording this album at Rancho de la Luna, in Joshua Tree. I was not so much aware of his collaboration with Queens Of The Stone Age at the time but was introduced to his solo work after Joseph Arthur, who I really love, had talked about him and his love for Lanegan’s work. I instantly fell in love with his music and the production work that all of these guys had done together on his records throughout the years.

You released your album “White Sage” earlier this year. What can you tell me about the writing process?

I started this project when I was living in the US some moons ago and then, started from scratch again after moving back to Europe. I then realized I was not at ease writing on my own for different reasons. I’m one of those people who are never fully satisfied with what they do I guess, plus I like communicating with other people in the creative process. I think I’m pretty good at bringing people together so that’s what I do… It’s important to admit our own limits in order to get things done properly… It makes for great encounters and beautiful collaborations.

Daran and I started some sort of lab work together in France, basically working on our own and then meeting in the studio to put things together, share ideas and try things out etc…

We decided to settle down in Montreal about that time and that’s where I met Mathias Schneeberger ( thanks to my friend Kim Bingham ) whose work I knew through Joseph Arthur & Mark Lanegan. I gave him the demo Daran and I were working on at the time, and he decided to get involved.

After that, I went to Dave Catching’s beautiful Rancho de la Luna in the Mojave desert, with Mathias Schneeberger & Chris Goss, where we wrote a couple of songs together like Hallee Rd and Monster.

Daran joined us there later down the line to record, as he produced the album, and Alain Johannes did some additional production on some of the songs, along with Chris & Mathias who added their mark a bit everywhere on the record.

Cully Symington, who was off touring with The Afghan Whigs at the time, joined us also to track the drums while we were there. It was a real fun process…

Is there a specific song on the album that you would recommend to a first time listener?

Mmm… That’s a tricky one because there are a few different moods on this record. I would say that A Scalp A Bear & White Sage are the most representative of the general mood although I believe Echo Park seems to be the song that reaches the most people…

How did the collaboration between yourself and Daran come to be?

It was not obvious for Daran and I to work together because we come from different scenes, he sings in French and, at the time, was only working with French-speaking artists, which has changed since we moved to Montreal… He is now producing a couple of English-speaking bands from Montreal at the moment.

We started working together after I heard a tune he was working on, which I really liked. Eventually, this tune became Army Of Skulls after I added words on it. From there, we kept mixing ideas… music & words.

Speaking of collaborations, are there any other Canadian artists you would like to work with in the future?

There are a lot of Canadian artists I really love like Godspeed You! Black Emperor, Thee Silver Mount Zion,  Suuns, Timber Timbre and so many more…

Can you explain what a Kensico show is like for those of us who have yet to see you live?

It’s either a five piece band with two guitars, bass, drums & me with a glockenspiel & a couple of mics with different pedals & effects on one of them… Or an acoustic set with just a guitar and me with the same set up. Both are very different but I have fun either way. The full band is obviously more intense but the mood is still there with the acoustic version.

What’s next for Kensico?

Playing more shows across Canada and hopefully find a good label in the US to distribute it and tour there also if possible. Right now, we’re also looking across the Pond to release and tour this album in Europe as well.

Canadian Beats is all about Canadian music, so please tell us who are you current favourite Canadian bands/artists?

As I previously mentioned, I’m very much a fan of all these guys from Constellation records. Godspeed You! Black Emperor, Thee Silver Mount Zion. I also really like a band they signed called Ought. I don’t know their record yet but saw them live by accident and really digged them! The singer seems possessed and made me think of Ian Curtis in that matter. I also really dig Timber Timbre, Suuns, Patrick Watson, The Barr Brothers, Plants And Animals…

What is your favourite outdoor activity?

I love being near the ocean, but I love the desert & the mountains as well. I like raw nature in general so whatever allows me to reconnect with myself and the elements, I’m truly happy with…

If you could travel anywhere in the world, where would you choose?

I’ve never been to Asia nor Australia so that would probably be my first « discovery » choices! Otherwise, I like to go back to the desert whenever I have a chance to. I like the jungle also. There is a little paradise I enjoy going to in the Sierra Madre, by the Pacific Ocean, where I have a few good friends & that’s really dear to my heart.

What is your preferred method of travel?

Anything that takes me where I want to be! I like sailing though. I come from Western Brittany, by the Atlantic ocean, in France… Obviously, sailing is important where I come from but driving is also great for admiring the scenery.

If you were to have a day off, what would we find you doing?

I’m much of a loner therefore I do enjoy spending a lot of time on my own. When I see friends, I have to admit that I get a bit hysterical because I’m always super happy to see the people I love, thus I can party real hard… but I usually spend a lot of time introspecting and writing. Days off are made for that… Thinking and writing. I never really stop…

I would love to meet them at a show, share a drink and exchange. That’s the beauty of all this. It’s a privilege to have people come to listen to your songs so it’s really nice to get to know these people and talk with them a little afterward.