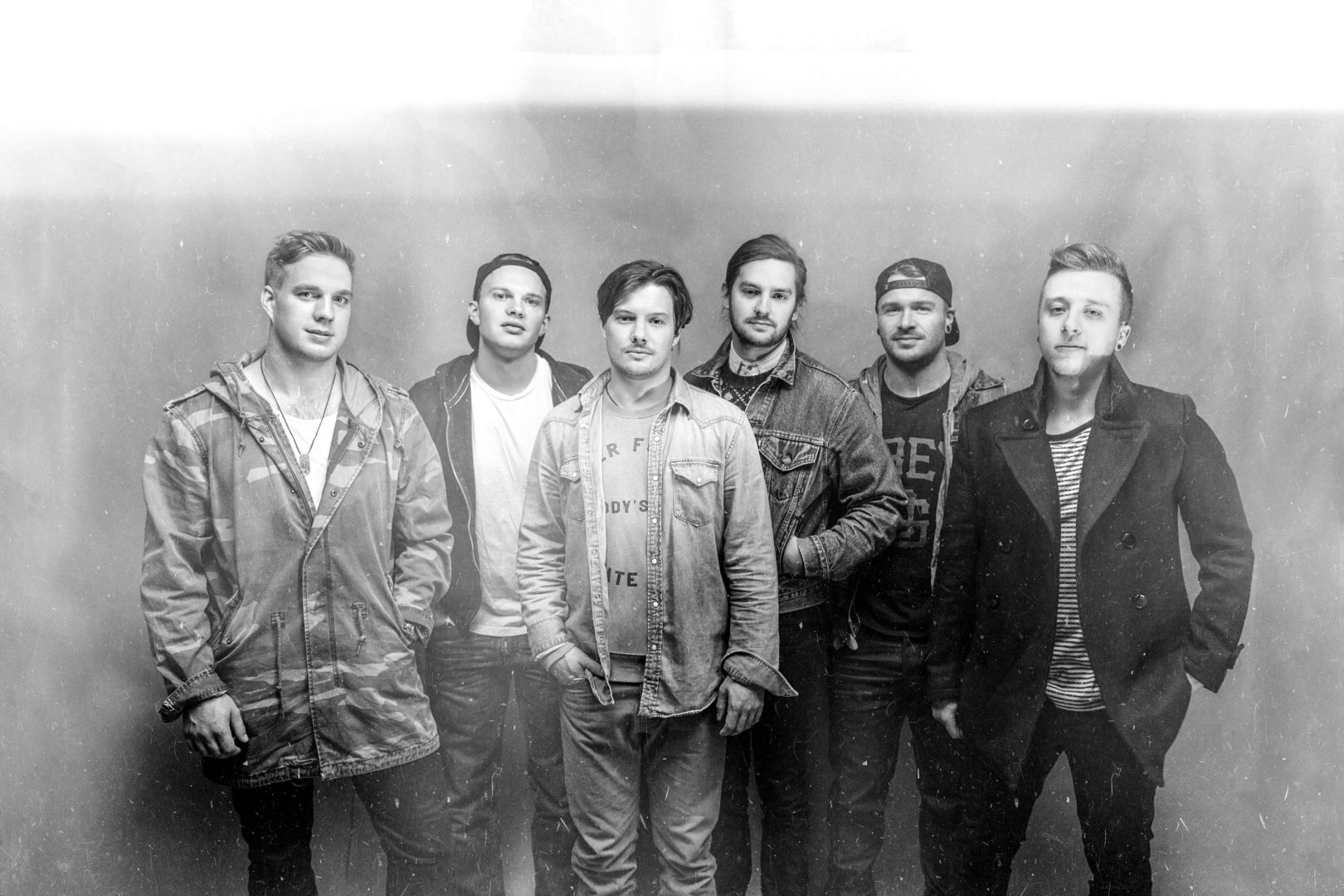 Four years after their debut album, Jumpstart, These Kids Wear Crowns are back with their sophomore album Still Having Fun. With the 2012 sale of their now defunct label EMI to Universal Music, the band was back to being an independent group and kept pretty quiet until the last few months. Still Having Fun was recorded and mixed by TKWC bass player Alan Poettcker’s home studio. Keep reading if you’re interested in what These Kids have been up to and where they plan to go from here.

First of all, can you introduce yourself for our readers who aren’t familiar with the band?

We are Alan, Alex, Gypsy, Joe, Josh and Matt. We all started playing music together in Chilliwack, BC in 2009 and haven’t killed each other yet! I’m Alex, writing this for the band. My apologies about the answers in essay form.

Shortly after the release of Jumpstart, the bands label, EMI, was sold to Universal Music. How did the sale affect the band? Is it part of the reason why things were quiet for so long?

We had two gold singles in Canada and a double platinum single in Australia, so our relationship was very good with EMI. We loved and still love everyone who was a part of bringing us into the Canadian music scene and eventually other countries. Shout out to Katie Clark.

When we were first signed there was a “bidding war” for lack of a better term and one of the reasons we picked EMI over Universal was because we didn’t want to be stuck on a roster with a large amount of pop artists; lost in the sea of potential. We wanted to be a project and that is what it felt EMI was doing with us. We were working together for a long term goal with a bunch of short term goals sporadically laid out but very reasonable to reach. The important part was the bigger picture. Deane Cameron, EMI Music Canada’s last President, was a big reason we had so much love at the EMI office. He saw something he liked in us. What it was, I couldn’t tell you, but that label treated us like gold and I hope they know how much we enjoyed working with them.

When EMI was sold to Universal and eventually disintegrated, we were of course promised big things but nothing ever flourished. I blame no one but ourselves for not producing the music that Universal was looking for. When you have every artist under your belt you don’t have to work as hard to make them popular. You can bank on surviving off the artists who gain fame naturally and strike strategically with your investment. To me, it’s really that simple. And it makes total sense. I assume, which you should never do, that they didn’t see the logic in putting money into something that doesn’t have the feedback their seeing from other artists who have less than 6 members and don’t cost as much to make look good.

Everyone on both labels had been very kind to us, although sometimes communication was lacking once we left EMI. In the end, music is a business and results determine your worth. If you cost more than you make, there isn’t a point to keep you on board. Did we make them back the money they spent on us? I doubt it.

Now, the reason we were quiet for so long is that we ran out of our first honey pot of recording and touring money and needed to start our second album to refill said honey pot so that we could afford to go back on the road and tour! Canada is beautiful, the people are even better, but it is a bitch to travel across! So, we wrote over 70 songs from 2012-2014. Only one was ever released as a single. It did miserable and we never entered into our second album and thus never got the second record and touring money. We parted ways amicably with Universal and started working on Still Having Fun almost immediately. Full of piss and vinegar!

Did being free from a label change how you approached this album like having Alan record and mix it in his homes studio?

After leaving the label we were kind of sad but relieved. We knew we were never going to release another album with Universal but we were also getting older. Competing with 1 Direction (or is it One D1rection?) when you’re 30 wasn’t a fight we were going to win. I don’t know if we even wanted to. It was partly our fault for not having the foresight to change course but no one knew EMI was going under and we projected we would have our 3rd major label release by now. We had the material. Was it good? Maybe, at the time, sure. But it certainly wasn’t great. And that is what they were looking for.

You can’t define great music. You can only pretend you know what it is and hope people stream the shit out of it.

Alan had built a studio over the years and the idea for Still Having Fun came from wanting to go back to our roots. We were kind of fed up with synth heavy music. Not that anyone will ever know, but we had written 6 albums worth of material of the stuff. The first album we ever released was under a pop-punk group we called Goodnight Medic. It was sloppy, the guitars were perfectly out of tune, and the bass guitar dominated the track. It was nearly scream-o without the cutting and bob haircuts dyed jet black.

“We didn’t have the pressure of making a commercially successful album. We did whatever we felt like doing. What came natural. Like we did in high school. The whole dirty guitar/pop punk/rock thing is dead but we made an album like that anyways cause we still like that style of music. No apologies. Still having fun.”, Alan Poettcker, Bass/Vocals/Producer.

What was the writing process like for Still Having Fun and how did it differ from Jumpstart?

To be honest, both albums were very much the same when it comes to the writing. We didn’t do a lot of it with other producers or song writers for Jumpstart, with the exception of the single Jumpstart, a song written by Matt Squire and Damon Sharpe – two dope dudes, and of course I Wanna Dance With Somebody, which is a cover.

As I said, most of the songs we did with other songwriters or producers, people will never hear. There are some youtube videos of us singing a song called Unforgettable which we wrote with Damon and Eric Sanicola – another dope dude, but other than that only a few of us have and will hear the rest of the 69 unmastered tracks.

Same with Still Having Fun; it was all written and recorded in Alan’s basement. That’s where it was really different – the recording process. In the beginning stages of the band, we recorded a self-titled EP ourselves before being signed to a major label, going on tour, getting onto a MuchMusic television show, then getting signed and from the songs we had already wrote recorded an album all over North America with Matt Squire, Damon Sharpe, GGGarth, and a few other producers. Then the eventual hiatus – writing songs no one will ever hear, then Still Having Fun which we ended up recording again by ourselves, only this time in one place.

When you’re not busy working on music, what keeps you busy?

We all work for a living. Music is not a career choice. It’s a career people chose for you. If you’re good enough, you’ll get the attention. But if you’re just above average, that’s not good enough. You can still have fun and maybe get some of the rock star benefits, those things are all possible, but to make a living off of selling your music, it’s tough.

That being said, What keeps us busy? Here’s a few nice cheeky answers for you; Life! Relationships! Careers!

Truth be told, if we ever got another honey pot of money delivered to us, you’re damn right we’d tour! We’re just not foolish enough to fund it ourselves.

Not at all. That doesn’t mean we won’t tour. We just do not have any plans as of this date I’m writing this of touring. It’s also going to be December soon, so, it wouldn’t be the best time to take off, anyway. Canada can be unforgiving in the winter. Spring, on the other hand…

Collaborating would be so much fun. We love to write music and have been pushing our personal boundaries when it comes to writing so I think if we connected with someone and could come up with something we were proud of then that is really what you want when you write with someone.

Although, the music we love to write we do with the guys we have in house, in band. So we never really outsource because we enjoy and learned how to write together.

I could give you artists (Weeknd, twenty one pilots) or producers (Calvin Harris, Max Martin) but those are not realistic. All I should say is that you never want to meet your idols, so this kind of feels like a loaded question.

I’m sticking to “anyone who we connect with on a creative level”. But you’ll never know that until you try to connect with them. So I’ve kind of conundrumed myself, haven’t I?

Luckily for us there are so many great Canadian artists!

I’ve mentioned The Weeknd, his music and whole package is dope. Videos are dope. Love Keiza. Her track with Skrillex and Diplo, Take U There, is amazing, although maybe not first thing in the morning. I’ll concede that.

Archspire. Good friends of ours and music nerds who we like seeing have international success. Especially in the death metal genre! Same with DCF, a good buddy of ours from Toronto. He’s a beautiful man with a beautiful voice and is always excellent company.

And The Holy Hum. The singer Andrew Lee always does something you’d never guess would work on stage. Makes you feel feelings.