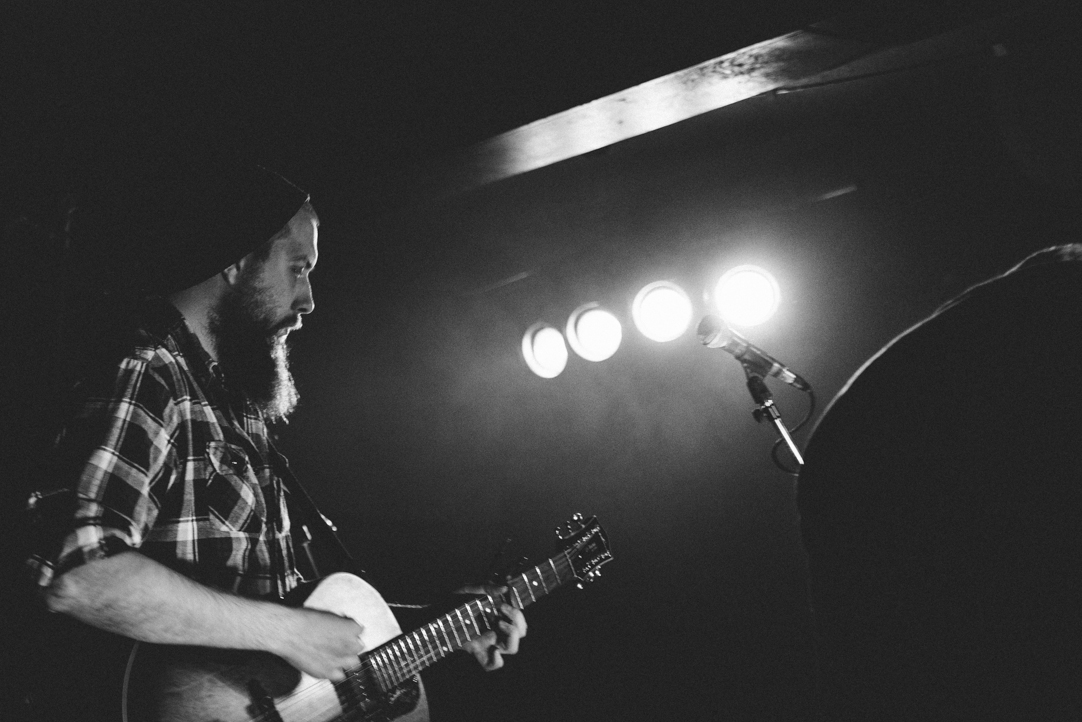 Gunner and Smith began as a new project in 2010, and evolved into a 4 or sometimes 5 piece folk rock ensemble releasing their first EP in 2011. They went on to record a full length album in 2014, and are currently doing a tour of Ontario and Quebec this month.

How did you come together as a band?

Gunner & Smith is actually one of those bands that changes constantly. When we go on tour I see who is available to come along and go from there. We have a set group that does the recording and the local shows, but sometimes on tour we can bring everyone along. Like on this tour we picked up a drummer form Toronto and a bass player who was out in London to fill in for others that couldn’t make it. The band in Saskatoon is kind of a mix of friends I started playing music with and then local musicians we met from playing shows around the city.

You seem to do a lot of touring and shows, tell us what it is like on the road and do you enjoy it?

Yeah most of the time its great. I feel like pretty much every tour you go through the same cycle. You work so hard to plan it and get ready that by the time it starts it catches you off guard. Then its really exciting right of the start and then you usually have a spot mid tour where you get really tired out and it starts to drag. Then by the end your half excited for it to be over, half bummed that its going to end. Overall I really enjoy it. When you’re on the road meeting new people and making connections and playing shows where you feel like you connect with the crowd it is the best. A string of bad shows can definitely bring you down though.

Is this tour supported by your full band? who is with you ? and what do they play?

Well that’s a tricky question. I write the songs, lead the band, plan the tours, and sometimes do solo shows. We have a group of musicians in Saskatoon Nick Dueck(bass), Brent Letkeman(keys), Graham Tilsley(guitar), Rachel Malena-Chan(vocals) and Nik Winnitowy(drums). This group does the writing and recording and sometimes tours. On this tour though its Brent and I from the usual band and Matt McLaughlin on drums and Scott Neufeld on bass. Both are guys that have toured with me in the past and are awesome musicians.

What are your live shows like? and what do you strive for when on stage?

I just strive to make music that I would want to listen to. I try to write songs with a strong melody and interesting lyrics. We try not to be too flashy and keep finding more and more that simple and open often make for a better song. Its like Down by the River on that Neil Young album. They play the same stuff for 6 minutes, but the groove is so nice the cong just feels great. That’s what we try to do. Get the song to sound right then layer over leads and interesting stuff.

Your music slightly reminds me of Strand of Oaks, very laid back.  Who else would you say has influenced you over the years?

I’m a huge fan of songwriters like Townes Van Zandt, Neil Young, The Band, Pink Floyd. Lots of older stuff. We worked with Ryan Boldt from, the Deep Dark Woods, who produced our last album. He had a huge impact on us and our sound. He really past on the importance of the simplicity and feel that I was talking about before. He showed us that we didn’t need to clutter up the songs, but that when we strip them back a little bit they are actually much stronger.

Where do you see the band heading in the next year?

After this tour I am wrapping up writing a new album. I’m planning a solo tour down the Tennessee, Georgia, and North Carolina for February. Then we will be working hard to rehearse  for a new record. I’m hoping to record in spring if everything goes according to plan. I’m also hoping to do a solo record sometime to use up some of those songs that don’t really fit well with the direction we are going with the band.

What was the recording process like for your full length album “He once was a good man”?

It was fun. Ryan, our producer, liked figuring stuff out in studio. So we came in with a plan and changed it a lot. We scrapped some songs, used some new ones and completely changed a few. We record as much as we can live off the floor just to get the feel of the songs right. It was fun because Ryan jumped in on guitar for a few tracks too. So it was a lot of work to get the songs write, but we definitely were happy with how it worked out.

Who writes most of the lyrics for your music?

I do. The lyrics are really important to me. The music I like almost always has interesting lyrics. It’s a tough thing for me to come up with lyrics and I absolutely can’t force it. My favourite ones just kind of happen and I’m not sure why. I didn’t go into the album with a them or idea for what the album would be but after going back and listening through the songs we chose I feel they actually fit together thematically very well.

I see there is a video for your song “Towns”, are there any plans to work on any more videos?

Yeah I think we will look to do some more videos for the next album. Videos are a little beyond me. My brother headed up that video and he and a team worked it up. I’m really happy with what they came up with because I wouldn’t know where to start with that kind of stuff. No clue.

Do you use social media as a tool? do you think this is helping you out as a band? how?

That’s an interesting question. I do use it. I do not like using it. Its definitely an important tool and some people use it really well, but I don’t think I do. I try, but just don’t think I have it in me to be interesting online. I find with all the planning and booking I do it makes it hard for me to bring myself to spend more time online. It’s too much time on my computer or phone. For musicians I believe its important to be experiencing things and interacting with other art. That fuels you to write more music and challenges you to do it differently or better. Scrolling through facebook and seeing all the articles people posts is kinda the opposite of that for me. For some people it means more, but not for me.

Here are Canadian Beats we like to ask some questions to get to know you better.

Who is your favorite musician?

That’s tough. I’ll say Townes Van Zandt. The songs he writes just get me I guess. I watched a documentary on him when I was younger and have been hooked on his songs since then.

What age did you start playing music?

My parents always tried to get me to learn instruments. I played piano and trumpet when I was young. I forgot everything from it. It probably taught me rhythm though which is great. I started playing guitar in highschool. I wanted to be a guitar player in a band, but couldn’t find anyone who wrote songs. So I started writing and being the front man. Things work out much different than you plan I guess. I started writing lots in my early 20s and it just snowballed from there.

If you could learn any instrument what would it be?

Piano. My hands just don’t co-ordinate that way. Really good piano players are amazing to watch and I wish I could do that.

What is your favorite time of year and why?

I like fall. I’m not a hot whether person. I like thanksgiving as a holiday. Its right up my alley. Coffee, stuffing and pumpkin pie. It’s a great time of year.

Nothing really comes to mind. I just appreciate you taking the time for us again!