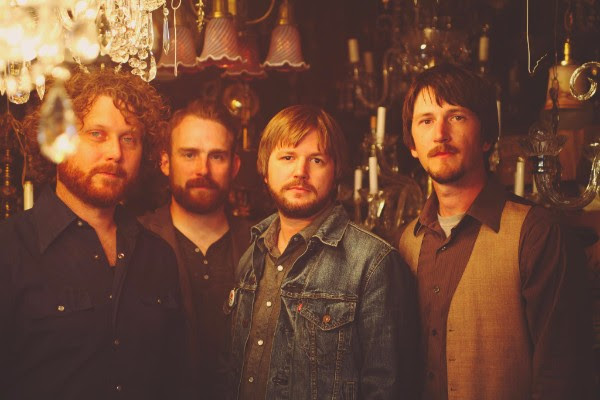 Marking their 15th anniversary as a band, Elvyn released Valley Of The Kilowatt Hour on November 13th. The official release party is on December 11th at the Horseshoe Tavern in Toronto with Run With The Kittens and The Alpacas. Check out what the band had to say about their new album, their tips for keeping your band going for 15 years and more.

Ryan Beerman: Hey There! Elvyn consists of me and my brother Joel. I play guitars, and write and produce the bulk of the songs. Joel is our drummer, and another set of brothers, Jason and Dean O’Reilly handle the bass and keys/acoustic guitar duties respectively. Rounding out the band, playing guitars, is Jeremy Knibbs.

Jeremy Knibbs: We often joke that if we didn’t play music, we’d still all be hanging out in Joel’s garage, yakking about old cars or something… We’re really good friends, and that is the glue that keeps us going after all these years. Love of pop and rock from the ‘50s through to the ‘90s is shared by everyone in the band, and informs our songs and playing. For example, I was asked to join the band based on the fact that I brought a Beachwood Sparks record to a friend’s cottage, the first time I met Ryan and Joel!

Valley Of The Kilowatt Hour is your first full-length album since 2010. What was the writing process like for this album?

Joel: Obviously for our fans it was a very long time coming.  However this time around we made more of a conscious effort to develop the entire group of songs to sound different enough from one another, but still have a similar mood and vibe that in the end felt like they all belonged on the same album.  Lyrically the album speaks more from the heart than our previous releases, so we felt that the music needed to be as thought provoking as the words themselves.

How did you find recording the album in your home studio in Peterborough differs from recording in someone else’s studio?

Jeremy: There were no time restrictions, and decisions were not made based on cost, but were made based on the quality of the song.  Many of the songs were recorded multiple times, in different keys and even having different choruses, lyrics, and guitar riffs etc.  We all would have mortgaged our homes several times over had we recorded elsewhere.

You recently celebrated your 15th anniversary as a band, do you have any tips for younger bands who are just starting out?

Ryan: Grind, grind, grind! There are no short cuts anymore. Focus on your songwriting, paring down the ideas to their purest form, then get tight on stage. Tightness will get you noticed, and if you combine that with good songs, you’re on the right road. Support local acts, and help build your community. Be a part of your scene!

Is there anything you would of done differently?

Joel: Time traveled into the future and stolen this album from our future selves, returned to the past and released this album two years earlier.

Ryan: We all have our favourites, but we love playing “AM,” “Everyone Is Calling My Name,” and “Landslide Cities” from the new record.

Joel: We’re going to be focusing on Ontario and Eastern Canada. We love the East Coast, and have some great friends out there, who’ve supported us for years. The big focus in 2016 will be festivals, in conjunction with our management company, who will be setting up as many as they can!

Jeremy: Moving forward, we’re actively looking for a label to partner with in Europe. The records have done well over there, especially in Spain and the U.K. and we’d love to expand on that!

Ryan: There are some, for sure. Chris, Jay and the Sloan guys, Teenage Fanclub, and in total fantasyland, it would be awesome to make a record with Neil Young or maybe Jeff Lynne. That would be the perfect fit for a producer!