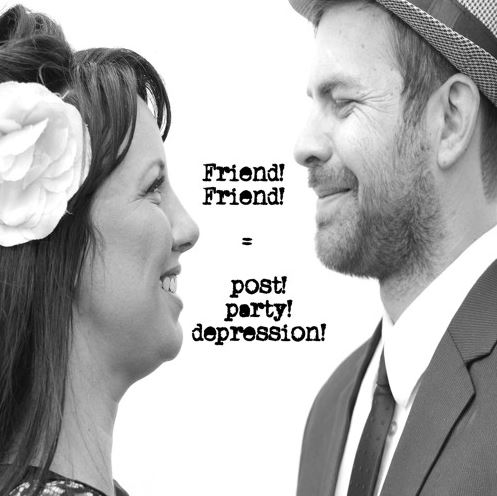 Moose Jaw, SK based band, Friend Friend is made up of married couple, Dustan Hlady and Carrie Hlady along with Matt Froese and Brian Capstick. The band released their debut album, “Post-Party Depression” in June of 2015, which features eleven tracks.

The second song, “I Could (N)ever Kiss You” quickly became one of my favourites, and I can see why the track has been getting airplay in Moose Jaw, it’s an upbeat folk-rock track and is fun to sing along with and tends to get stuck in your head.

As the album plays, the songs continued to impress me, especially when I reached “Eyes”. I love a song that you can sing along with and can put you in a good mood just listening, and this is one of them.

Whether you’re looking for slow songs, upbeat songs or anything in between there is something for you on this album. The band does an stellar job at what they do, and I highly recommend you check them out!