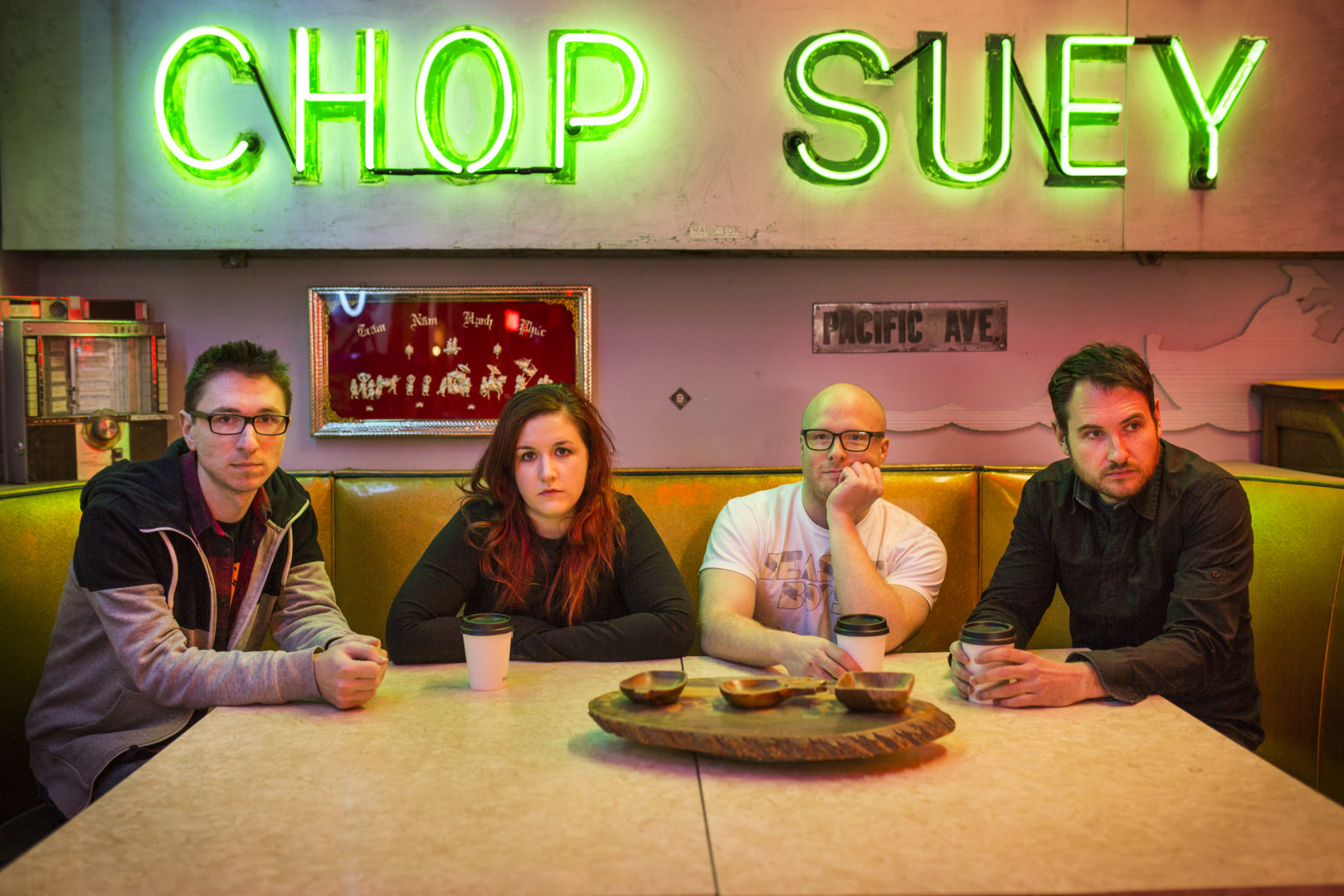 I recently had the chance to ask Ian Peters and Nick Friesen from futurekids a series of questions relating to their background, the album, and much more. When you’re done reading what they had to say, be sure to check out their live off the floor performance of “White Girl in a Wu-Tang Shirt”.

Nick – We are one of those indie rock bands from Winnipeg, Manitoba that likes to get sued by the mayor and play shows/record albums. We are made up of human drum machine Ian Peters, guitarist/singer Paul Webster, Moog player/singer Kaeleigh Ayre and me, Nick Friesen, on bass and occasional vocals.

Ian – I helped Nick kill an old band, while at the same time starting a new one.

Nick – Yeah, we all met while in other bands, doing this quasi-record label co-op thing called The No Label Collective. As that was winding down (and I was breaking up a band called Merch Table Delite) I asked Ian and our former guitarist to play MTD’s last show, but we decided to become a new band, so it wound up being futurekids’ first show.  Then we made an EP and got a singer named Gareth Williams to sing the songs I wrote, but a week after it came out he and the guitarist quit to do their own thing. So a year ago we recruited Kaeleigh and Paul.

How did you come up with the name, “futurekids”?

Ian – We are a time travelling experiment gone horrible wrong. And right.

You will be releasing your debut full length album, “This is Everything” on November 20, what can you tell us about the writing process of the album?

Ian – It’s a collaborative effort. Although Nick and Paul are the main songwriters on the album, we all contribute to the finished product. My official job is “judgmental wallflower.”

Nick – Yeah, we put out an EP last year and I wrote all the songs on that, but this time the goal was to include everyone’s voices and experiences. It makes for a more diverse record. There are pop songs and rockers and acoustic songs and weird fuzzy things with odd time signatures.

What was one of the highlights while recording the album?

Nick – We broke it up into three sessions. The first in my basement, the second at my family cabin and the third in Paul’s jam space. Getting away to the cabin for three days was great, but I’m kind of a taskmaster so I didn’t let them do too much relaxing.

Ian – Yeah, a highlight was Nick’s cabin, and wearing a sweet bandana.

The album features 13 tracks, do you have a favourite?

Nick – I like writing songs and having other people sing them, so hearing Paul and Kaeleigh deliver “White Girl in a Wu-Tang Shirt” even better than I heard it in my head was pretty cool. But “Olivia Sea” is a favourite, maybe just because it’s the first song we ever did as a band.

“White Girl in a Wu-Tang Shirt” was released as the first single, what made you choose this track?

Will there be a video for the single?

Nick – I made a hand-drawn animated music video for a song off of our EP called “Inservice,” and that took me 192 hours, so if we do one, it won’t be animated. But we’re all filmmakers and actors so we’ll get around to it at some point.

Your album release show will be at The Windsor on November 21 with Greek Riots, astre and BUNNY, can you give us any hints as to what the show will be like for someone who has yet to see you live?

Nick –I’d say our live show is kind of tight but occasionally ramshackle, lots of boy-girl harmonies and distorted feedback with occasional film projections. We’re aiming for something Pixies-esque, but it probably comes across more like a Kelley Deal 6000 cover band.

Do you have any other upcoming shows you’d like to tell us about?

Nick – He just doesn’t know it yet.

Canadian Beats is all about Canadian music, who is your current favourite Canadian bands/ artists?

Ian – Fred Penner, but the first influential concert was Smashing Pumpkins in 1996.

Nick – The Stones on the Voodoo Lounge tour was the first, but The Tragically Hip’s 1997 Roadside Attraction tour was the second, and Wilco was there, and that changed my life.

If you could work with any other Canadian artist/band, who would you choose?

With winter coming up quickly, we’d like to know what your favourite outdoor winter activity is?

Nick – Winnipeg is as cold as Mars, so chasing my dog around the backyard for five minutes is about all I can handle.

Nick – I don’t know what notes are.

Ian – I can’t do forward flips, I always land on my side.

Ian – Keep fit and have fun, with Hal Johnson and Joanne McLeod