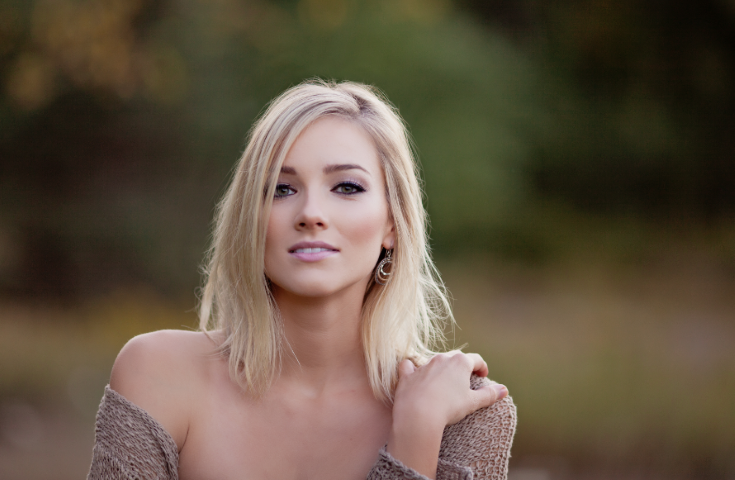 Leah Daniels is a rising country artist from Uxbridge, Ontario. She has several award nominations and wins under her belt and has performed at some of the biggest music festivals including The Boots and Hearts Music Festival, and The Havelock Jamboree, as well as having shared the stage with country legend Alan Jackson. She has also recently released her debut album What It Feels Like, which came out on October 23rd. We had the chance to ask Leah a few questions about her musical past, her album and her future plans.

First of all, congratulations on releasing your debut album. How does it feel now that you’ve finally shared it with your fans?

It feels amazing! It’s always exciting and a little nerve wracking to be releasing songs that I’ve been working on for so long but now that the feedback is coming in and it’s all been really positive I couldn’t be happier!

For those who haven’t had the chance to hear it yet, could you give them a hint on what to expect?

People can expect an honest album. I spent the better part of 3 years writing to find the right songs.  It’s all from the heart whether it’s a happy, playful song, heartbreak ballad or a song full of angst.

Do you have a favourite song on the album?

I go through phases…right now my favourites are probably “Old Piano” because of the beautiful piano line and powerful choruses and “Salt Water” for the stripped down storytelling vibe of the song.

It was amazing. I worked with a lot of different writers and producers and also co-produced a couple of tracks, which was a great experience. I like to be involved in the recording process as much as I can. I love watching the songs grow and develop from a demo to a fully produced song. It’s amazing how the Internet has changed the way records are made. There were times when I would record vocals and send them to my producer who was on the road touring.

I can’t remember exactly when I decided but it was probably around the time I performed in my 1st talent show. I fell in love with performing. Something about the transfer of energy between an audience and myself is addictive for me!

Who are some of your musical inspirations?

Growing up I listened to a lot of different artists from different genres.  I loved Celine Dion for her voice, Sarah McLachlan and Jann Arden for their songwriting, and of course Shania Twain for… well everything!

Do you have any upcoming touring plans?

I am heading to western Canada this month for a promo tour for the album, but I hope to do a full Canadian tour in the New Year.

Are there going to be any more singles/videos from the album?

Yes! Right now we are preparing to film the music video for my current single “Old Piano” which will be out mid November and I plan on releasing another single or two in the New Year.

What was it like to see your video for “Go Back” on rotation on CMT?

Amazing! CMT has been extremely supportive since the beginning of my career. It was very exciting when I saw it had made it in to CMTs Chevrolet Top 20 countdown and it always feels cool when a family member or friend calls you up to say they saw your video on TV!

You’ve played some big country festivals, what is one of your favourite memories from the experiences?

Playing Big Valley Jamboree this year. I played the after Lady Antebellum on the side stage. The crowd was so pumped up the energy was amazing!

Well there is the video for “Old Piano” coming out soon and promoting the new album! (see above questions too I kinda answered) 😉

If you could tour with any artist or band, who would it be and why?

Oh that’s tough…  Gonna go with Keith Urban because he puts on a great live show… or Queen that would be amazing too!

If you had the chance to interview one of your favourite bands/artists, who would you choose?

Reba McEntire – I admire how she is such a successful singer as well as actor.  I bet I could learn a lot!

What do you think your oddest habit is?

I have a bad habit of leaving drawers open. You can always tell when I’ve gotten ready in a bathroom or been cooking in a kitchen.

We do a little medley of my song “Still” into “Best of You” by Foo Fighters. I gotta say that is probably my favourite moment of every show.

Are there any Canadian bands/artists that you would recommend to your fans?

The Brothers Landreth – I got to do a show with those guys and they are amazing! Also Ben Hudson who is a new artist from my hometown Uxbridge. He just released his 1st video/single.

Thank You!!!! You make all of this possible!