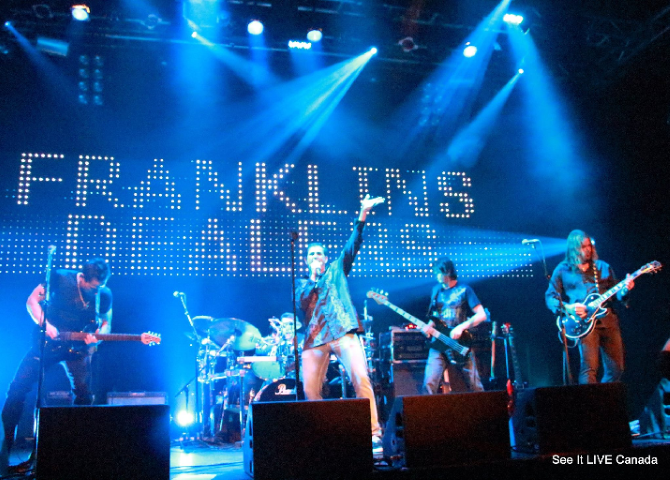 Vancouver, BC based rock band, Franklins Dealers have been keeping busy, but we are lucky enough that we got to have a chat with them about what they’ve been up to, their upcoming shows and so much more! If you are able to check out their upcoming show with One Bad Son at VENUE, you should! More details: https://www.facebook.com/events/855882877831338/

First up, can you introduce yourself to the readers?

How did you meet and form Franklins Dealers?

Dean Kruger and I met about 15 years ago briefly through a friend however  we did not keep in touch until the same friend wanted  to stop by Nicks Studio and had a few beers and began to jam , then we decided to write and it became this beast we did not want to stop so we brought Joe Wowk in to change us from that original garage band sound to a fine-tuned, well produced  rock band. Joey brought expertise but huge drive and ability and when he added Dave Hopia and Frank Baker to the mix We believe we have created  a new rock band Canada can be proud of.

Where did the name come about?

The name came from Dean Kruger, we argued about changing it for a long time as Nick  never liked it but has now realized it has stuck with us and can’t see us called anything else now.

Have you had a full album release?

Yes, we released our first CD at Cannafest Aug 7th 8th 2015  in the beautiful town of Grand Forks BC.

What’s next for Franklins Dealers?

We are now working on our second CD and looking to do more shows and perhaps support some of the larger acts that come to Vancouver.

You have a show coming up on November 13 with Pistolfish and Intoxicated By Nature, what can fans expect from this show?

Yes, we are playing the VENUE in Vancouver and you can plan for some good old fashion kickass rock n roll. The stage there is absolutely fantastic to play on, and the sound and stage crew are fantastic.

In your live shows, do you do strictly original tracks or do you tend to throw in some covers? What is your go-to cover song?

We are all original but we did release Radar Love “Golden Erring” and we do a live version of  Take Me To the Captain “PRISM” to honour one of Canada’s greatest singers and past friend Ron Tabak,

When can we expect more tour dates? What about East Coast?

Yes we will be doing more shows but have not done anything back East yet. We will keep working hard and hope to achieve the interest of the Venues and booking agents after our name runs across their desk or ear maybe they take a closer look.  All we can do is keep pushing

Canadian Beats is all about Canadian music, who are you current favorite Canadian bands/ artists?

Brian Adams, Nickelback, Burton Cummings, Nick Gilder, PRISM, HEADPINS, STREETHEART, RUSH  are a few, but there are more. We are into the classic rock sound and and you can hear the influence in our music. We like to think that we write the classic rock that some may have forgotten.

What would your fans be surprised to learn about you?

We are all about vertical farming and global food production for the planet, Affinor Growers is what our lead singer Nick Brusatore  is the mechanical designer and inventor for and we all hope that Franklins Dealers can help press global food production and be a voice with our music and assist the globe in getting clean fresh food for all.

When autumn hits, it’s all about Pumpkin Spice, where do you stand on pumpkin spice?

Pumpkin Spice,  hahah    love it  and  love Pumpkin Pie and Nicks daughter Danica’s nick name is pumpkin whom we wrote a song about on next album.

Answer: Franklins Dealers looks forward to performing for you and we thank you for your ears and support.