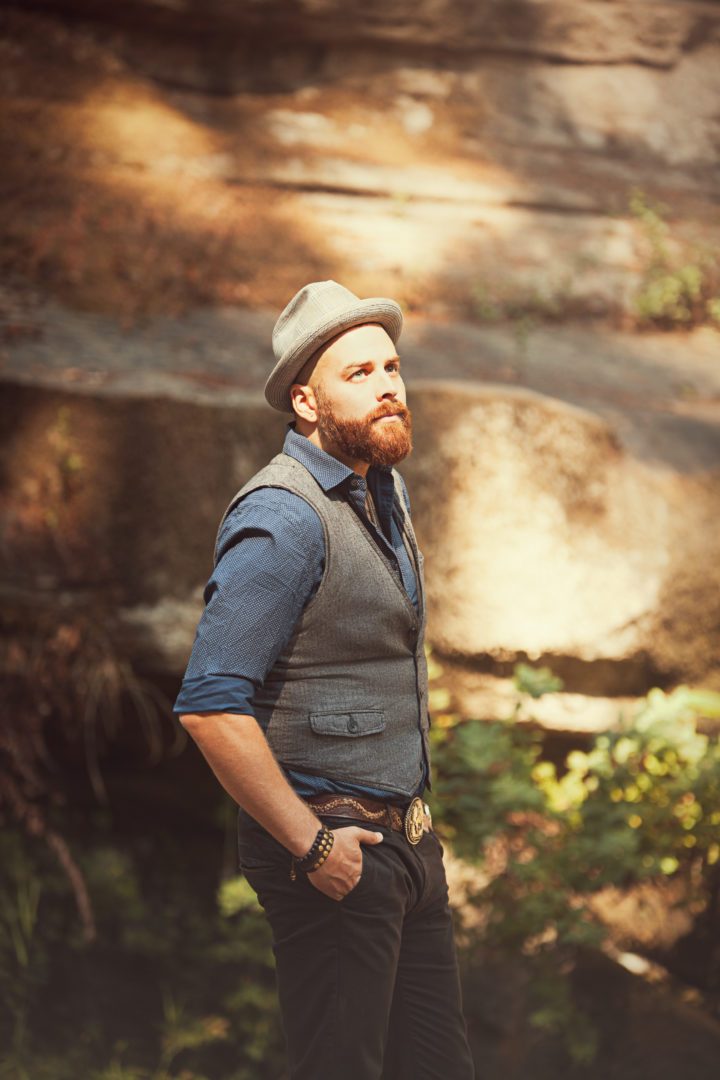 Vancouver, BC based artist, Christopher Arruda, AKA The Lion from The Lion The Bear The Fox recently released a new solo album. The album, “Dug Up Bones” is one I would recommend, see my review HERE! When asked if I would like to ask The Lion a few questions, I jumped at the chance and now it’s your turn to see what he had to say!

What made you decide to pursue a solo career as The Lion?

About six months ago, I noticed that touring with my main project (The Lion The Bear The Fox) over the past 3 years had really rebuilt my confidence as a musician, performer and songwriter. I’ve always loved the aspects of connection and spontaneity that comes collaboration in a band setting but I’ve noticed that there is a certain cathartic release that only seems to be reveal itself when you’re being completely responsible for the art from start to finish. I started to crave that release and that’s when I started work on Dug Up Bones.

You just released your first album as The Lion, how has the response been?

I’ve been really pleased with the support thus far. My album release shows in Nanaimo and Vancouver were sold out and the people that matter most to me have expressed an appreciation for the record. When I decided to start recording Dug Up Bones, my initial goal was just to finish something and put it out. I’d been struggling to complete songs and so I thought if I could force myself to finish something once and for all, that would be a real success. Happily, I did finish the work and it turned out to be something I’m very proud of.

The music always comes first for me. I’ve never been one to sit down in a fit of inspiration and write a song about a specific topic. For me, the music comes first and with the music comes a feeling. A melody will come and then with the melody, slowly the words. I’m always really careful with the words, I don’t write them down unless I’m sure about them – sure that they feel right for the song.

Overall, on Dug Up Bones, there is a definite theme running through the record. Justin Vernon once said he uses songwriting to “excavate” ideas and feelings about himself and life that he didn’t fully understand and that once the ideas were out in the open (in the form of a song) he could look at them more clearly and hopefully, move toward a better understanding of them. I suppose with this record, that was my inspiration. It’s an invitation to the listener and to myself to “dig your bones out of the ground, to set them free is to be found”. (-from the title track lyrics)

The album is full of great songs, is there one song that stands out to you?

Ironically, I think my favourite piece is the song I struggled most with during the recording process. Recording Love Like a Hopi was like going to war for me. It was one of the first pieces I started and i just couldn’t seem to get the mix right. I tracked a ton of instruments on that song and in the end, I made it work by pulling almost all of the production out of the final mix. It only gets large and orchestral toward the end and I’m really happy with it. I get a tattoo on my body to commemorate each record that I put out into the world. For Dug Up Bones, I chose the lyrics “Love like you’re not chained to the ground.” from this tune. To me, the lyrics and instrumentation on Hopi really seem to sum up the process of making this record. It’s heartfelt, it’s hopeful and I’m very proud of it.

You actually wrote, played, sang, engineered, produced and mixed the entire album, what made you decide to do it all on your own?

Well, the short answer is that it financially, it made sense! Free always makes sense, right? In the larger scheme of things though, I’ve made a lot of records now and each one has come together in a different way. I’ve paid thousands of dollars for studio time and mixing and come away very disappointed with the results. Over the past few years, I’ve stepped into production and I think my skill had finally gotten to the point where I was comfortable putting the album together by myself. I talked about it earlier, but something very special and personal can happen when you do everything on your own. In the later parts of the process, it can become incredibly difficult to make choices or to separate yourself from the work but in the end, you end up creating something that is truly and completely a part of you and no one else. That can feel very rewarding!

How was the experience?

It was really beautiful. My girlfriend has a family cabin up at Pavilion Lake near Lilloet. I mentioned before that I was having a lot of trouble finishing songs, so I thought if I could go somewhere and be totally alone, I could just sit in the quiet and wait for them to finish themselves. I spent about two weeks up in the cold on a frozen lake last winter. At that time of year, there’s maybe 10-15 people within a 100 km area so it was cold, quiet and cozy in the cabin.

There is definitely a challenge to recording that way from an engineering standpoint. Simple things like pressing record and then getting to your instrument can be much more difficult on your own but overall, I was very happy with the process. It really forced me to focus on getting great performances on the instruments as opposed to “punching in” and using studio magic to make it happen.

You have a few shows coming up, what can fans expect from the shows?

At some point, I will be putting a band together for this material but for now, they can expect to see a really honest presentation of my music. The shows so far have been wonderful, theres a lot of laughing and storytelling and of course, a very passionate performance.

Will your East Coast fans have a chance to see you live in the near future?

I really hope to be out at CMW with The Lion this year and if I am, I’ll put together some dates out there in May!

The Lion The Bear The Fox is about to record our second record, so apart from dates in Victoria and Kelowna this month, most of my energy until Feb or March will be touring with the band, or getting the album done in the studio!

Canadian Beats is all about Canadian music, so who are you current favourite Canadian bands/artists?

Lately, I’ve been a big fan of the new Metric and Half Moon Run records! Oh, and I definitely like that new Weeknd album as well. As I’m going through my iPhone I’m realizing that I’ve had the latest Dan Mangan release on there for a really long time, it’s an excellent piece of work!

As always, I have the pleasure of meeting some truly fantastic and inspirational people when I step out of my house to play shows. I think I’d just like to convey my gratitude. Thank you all for the love and support – for the kind words on Facebook or after shows. It all really adds up and makes this journey make sense for me!