Drake Jensen Trades In His Cowboy Boots For Combat Boots

Canadian country music artist Drake Jensen has traded in his cowboy boots for a pair of military-issued combat boots. After three studio albums, a Christmas album, and a handful of awards and accolades Jensen has joined the Canadian Forces.

About six years ago, Jensen knew music was his passion. For years he had a burning desire to share his voice with the world. After being encouraged and convinced by friends and family to pursue his musical dreams, Jensen released On My Way to Finding You in 2011. The album’s single “Wash Me Away” gained positive critical attention and radio buzz.

Jensen’s early life was never an easy one. Dealing with school yard bullies affects and tortures the mind. Jensen put all of his pain and turned it into music when he released his second album OUTlaw in 2013. Jensen released the single “Scars” and donated a portion of the proceeds from the digital sales of the track to bullying.org. The accompanying music video for scars has reached over 250,000 views on YouTube and continues to affect and change lives one play at a time.

Jensen’s most recent project Retro is a dust-off of classic songs. Released digitally early 2015, Jensen took a collection of some of his most favorite songs and revived them on this album. Containing beloved favorites ranging from country to classic rock, Retro is one of Jensen’s best vocal performances and showcases his musical growth and talent.

Following his musical dreams was only one of the many paths Jensen had set out to follow. During the span of his musical career, Jensen had the urge to do more. Jensen wanted to do more for his country, his community, and himself. After obtaining success in music, Jensen knew it was time to apply himself elsewhere.

Going back to school is tough at any age. Jensen successfully obtained his high school diploma, college upgrading, and exceptional school grades to complete his enrolment in the CF.  Now officially enrolled as Private Jensen, he is now looking forward to a rewarding career as a Medical Technician.

Though Jensen’s musical adventures have not completely been forgotten. The physical version of Retro will be released in early 2016, with some bonus material for those who were patient enough to get their hands on the album. Jensen promises to continue to create more music, make appearances, and entertain his fans. As Drake Jensen, or Private Jensen, he continues to be an example for all of us. 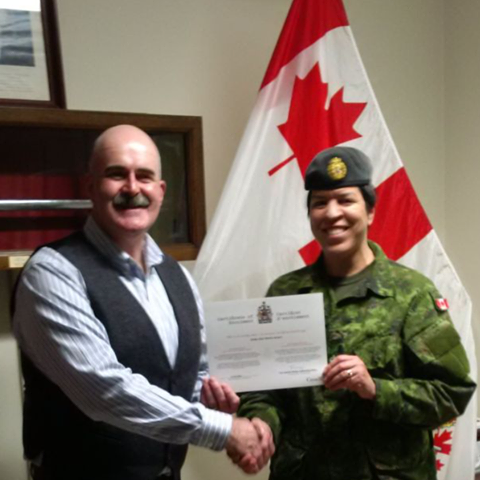