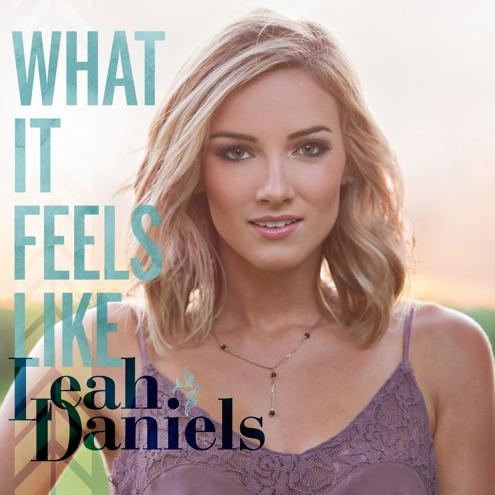 For Leah Daniels releasing her debut album “has been a dream come true .” Daniels debut album What It Feels Like was released to iTunes on 23 October 2015. Physical copies of the album are also available on her website (http://leahdaniels.blogspot.ca/). What It Feels Like is a perfect showcase of Daniels natural vocals, and strong song writing skills. Having penned 8 of the 9 original tunes on her album with some of Canadian music’s finest songwriters, Daniels explains that “The inspiration for my music comes directly from personal life experiences. I did a lot of writing for this record and really took the time to craft and collect the right songs. They’re not complicated topics, but they reflect the events that have touched my life.”

No stranger to the stage, Daniels has been making industry noise as a polished performer. Sharing the stage with artists such as Alan Jackson and many other notable country music names, Daniels knows a thing or two about entertaining. That list is bound to grow longer when she hits the road in support of What It Feels Like. Already earning her first Canadian Country Music Association award nomination at the 2013 CCMA awards for Interactive Artist of the Year, we know it certainly won’t be her last award nomination.

“Boots ‘n Jesus” is a great up-tempo opener for the album. Throwing the album into a car stereo on a hot summer day with the roof open and windows down makes for the perfect listening experience. With lyrics like “I like summer nights lyin’ under the stars, and singing “Strawberry Wine” with my girls at the bar.” gives the song that “want to let go and have some fun feeling.” Dave Gunn who spent over six years with the Matthew Good Band lends his songwriting talents on this toe-tapper.

“Dreams Without You” instantly became one of my favorite tracks on the album. Not only was it a co-write between Daniels, Mahood, and the very talented Patricia Conroy but it had some amazing mellow sounds and crisp harmonies. “Tomorrow it will be alright, but I can’t forget your face tonight.” are just one of the lines in the song describing the difficulty we face when trying to forget someone from our past.

Gavin Brown has lent his production talents with great acts such as The Barenaked Ladies, Dear Rouge, and Billy Talent to name just a few. Dan Hill is a living legend in the songwriting world. No explanations necessary. “Take Me Outta The City” is a great up-tempo rocker. A co-write of Daniels, Hill, and Brown you can hear the rock, pop, and country elements of all three talents. One of the fuller sounding songs on the album.

“So In Love” is a product of Daniels, Mahood, and Wallace. Light and breezy it is a cute love song. Daniels vocals are on the lighter, and sweeter side for this tune. Daniels conveys the lyrics convincingly and definitely pulls the song together with ease.

The newest single from What It Feels Like is “Old Piano.” Though Daniels has no writing credits on this track, she sure knows when to pick them. Penned by Conroy, Alyssa Bonagura, and Kathie Baille “Old Piano” is about the end of a relationship. All the character in the song has left is her “Old Piano.” “That old piano is all that’s left of you and me.”

Daniels and Ellis join forces to write the power ballad “Still.” “Still” thinking about someone can be one of the most frustrating things we can do when a relationship ends. Daniels captures the pain and raw emotions of trying to move on, but “still” being stuck.

“Salt Water” is a combination of the writing talents of Emma-Lee, Kosowski, and Daniels. “Salt Water” reminded me of a modern-day “Grandpa” by The Judd’s. From stories as a young child, to growing up, moving on and out, “Salt Water” follows a young girl going through life and hanging on to stories from her childhood. “Let the waves wash me over, Salt Water.”

Daniels takes some time to showcase her vocals by adding a stripped version of “Dream Without You” as the final track of What It Feels Like. Daniels shines on both versions, but you can truly feel her performance on this version of the song. A great addition to album.

What It Feels Like is a strong blend of natural country influences, mixed with terrific vocal performances. Daniels knows how and when to use her voice. Each song blends into the album seamlessly. With What It Feels Like out now, we are bound to catch Daniels on the road promoting her album. A strong work of country music Daniels is sure to make some more noise at the CCMA awards in upcoming years.