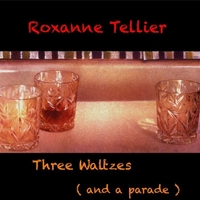 Toronto, ON based singer-songwriter, Roxanne Tellier released a four song album, “Three Waltzes and a Parade” in August 2015. The album was partly a birthday gift from her husband, Shawn O’Shea and party a continuation of more than 30 years of making music together. Shawn chose the material and produced the album.

One thing I would say is that each of the four songs sound very similar, and show very little creativity in choosing the tracks, I would have enjoyed to hear something a little more upbeat that shows off more of what Roxanne’s vocals are capable of.

That being said, she does what she does well, and I love how the album came about. If you are a fan of Jazz, I recommend you check out the album.