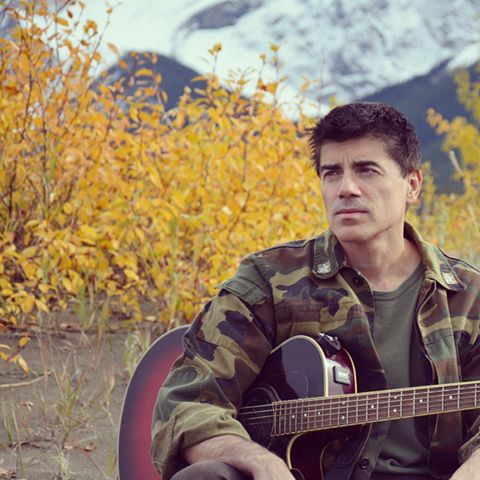 Antonio Piretti TOZ, originally from Italy, is an acoustic/adult contemporary singer/songwriter based in Toronto. He started in the music industry in 2006 in Italy, then moved to Canada in 2009. Since moving to Toronto he has released three albums, demos, singles, and has performed more than 300 shows throughout Canada, America, the UK, Italy, France and Belgium. He is taking a new approach on his live show and throughout October he toured across Canada bringing his acoustic show alive with visuals like pictures and videos to bring life to his songs. We had the chance to ask Antonio a few questions about his music, live show, and much more.

If someone hadn’t listened to your music before, how would you describe it to them? Is there a song they should start with first?

My music are messages to communicate emotions and beliefs..
The songs as well as their messages vary and the range goes from soft Italian love songs to English songs sensitizing on certain political and humanitarian issues. Since my songs are pretty various it’s difficult to name one song, which reflects all the aspects of my music. However, my favourite albums I have recorded are “My Name Is Not Important” (https://soundcloud.com/bytoz/sets/ep2012) and “Acoustic Italian Versions” (http://soundcloud.com/bytoz/sets/2010ita).

Why did you decide to pursue music as a career?

I felt that I needed a change in my life.

Working, working and only running behind the money to buy fancy things had no meaning for me anymore. It seemed aimless and without a sense. I wanted to do something with more emotions involved and I wanted to transmit or share the values in which I believe. At first, I started to write a book, but while writing I felt that the more emotional way to express myself were lyrics and melodies. So, I started from scratch to learn how to sing and play the guitar and I started to write songs.

Some of my musical influences are Damien Rice, U2, David Gray, James Blunt, Elvis Presley, Tracy Chapman and the Italian Lucio Battisti or Gianna Nannini.

It depends…Sometimes, when there is a strong inspirational flow, I sit down and write a song right away.
Most of the time I write down some lines or rimes that come to my mind and slowly they become an idea of a song. My songs are messages either derived from personal experiences or from what is happening in the world around us and in the human minds.

You’ve played in quite a few different countries and places in the world, what are some of the big differences you’ve seen in the different music scenes?

I feel that in UK, Canada and U.S. you have more acceptance as an emerging artist and more freedom to try. People give you a chance and are more opened to non-established artists.

In Italy it is more difficult for non-established singer & songwriters and you are mainly only considered, if you appear on TV or in these stupid talent shows. Buskers for example are often seen as poor guys (homeless) trying to earn some money. In Toronto, where I live, you are respected as a busker, as a musician who tries his songs and who brings his music in touch with the people. I have just finished my tour ROOMMATES OF THE SAME PLANET across Canada from coast to coast, where I have played 22 gigs in 16 cities, but also every once in a while on the streets, for fun and rehearsal. Compared to all the countries I have played before, the Canadians are a particular wonderful audience. They are curious and open, respecting and appreciating the artist’s efforts and give you a chance to express yourself.

Generally, the music and the musicians need encouragements and support from the people and also from the institutions and the environment. Each obstacle is a brake to the flow and creativity.

They can be sure that the performance will be authentic and full of emotions. A kind of musical path through life experiences, performed with passion.

Why did you decide to bring along videos and pictures to your live shows?

Upon the Canadian tour from 1st September to 23rd October 2015, I have introduced the new show concept: AudioVisual Show. The show is an acoustic gig combined with a screening of pictures and videos to amplify the messages of my songs and tell their stories (live memories of the show: https://youtu.be/f5A2pAHH2pM).

Videos and pictures have a great power to communicate. The songs combined with visuals can even more touch the hearts or souls of the people, so I am able to share emotions and believes more profoundly.

Furthermore I wanted to involve other artists to share and expose their art in a new way. So I have integrated works of painters, photographers, cartoonists.

The development of the show is very exciting and there is so much room for creativity and ideas.

After the tour I would like to take a moment and cut out the right time for myself dedicating a period to explore better the music. I feel the desire to create something new. In addition I want to create more visuals for more songs. There is a great potential and I would like to invite all interested artist to participate in the project and exchange ideas.

If you could play at any venue in the world, where would it be?

I would like to be able to revitalize an abandoned place and show with the energy of a concert that music has the power, music is life and can heal and connect everything. Wherever there is music there is life.

What’s one instrument you don’t currently play that you would like to learn?

I would like to know how to play piano and soon I will make it reality.

What’s something you like to do in your free time?

I love sports. Everyday I do something like jogging, biking or just gym. Sport is my way to fix myself, to take out what is wrong and reset to proceed.

What’s something that you always have to have with you on tour?

My recyclable bottle of tea is always with me, everywhere and my book in which the people can write their comments and their contacts to stay in touch.

If you had to listen to only one album for the rest of your life, what would it be?

Wow… This is a cool question…I have sooooo many good album’s in my mind. If I can pick only one, I would choose “The Joshua Tree” by U2. It’s fantastic and it has everything: love, deepness, cool beats and so much passion presented in such an amazing way…

Be real..!!! Be yourself..!!! Live and create your life..!!! Don’t act as a robot and don’t follow the stereotypes of the society. Face and overcome your fears. Create your way and walk your path. Life is only one. Everything is possible. It’s up only to us, so let’s take the opportunity, the gift called life. With passion and courage we can be part in creating a better world for all of us – we are all ROOMMATES OF THE SAME PLANET.