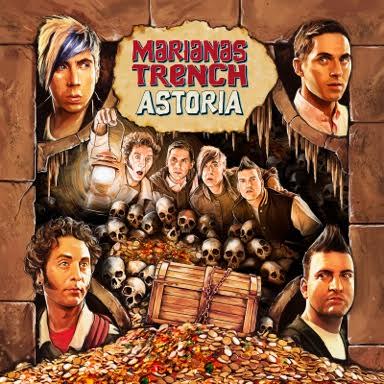 Marianas Trench have finally shared their fourth studio album with the world. ‘Astoria’ was released on October 23rd via 604 Records, following the release of the lead single “One Love” in late September. Full length songs and short interludes come together for this emotion packed seventeen track release.

When the band said in interviews that this album was their most personal yet, I found it hard to believe that it could be more personal than some of the songs they have previously released such as “Skin and Bones” and “Lover Dearest”, but I was definitely proven wrong. The album has so many different elements to it and obvious influences it will have a hard time finding a listener that doesn’t like at least one song. The lyrics shed some light on the life of lead singer Josh Ramsay’s life as of late and pulls on your heart strings in more ways than one. If you want an example of how diverse this album is, listen to one of the more upbeat songs, “Yesterday”, with heavy 80’s influence and compare it to the extremely emotional “Forget Me Not”, a song primarily played on piano with lyrics that will have you feeling everything Ramsay put into this touching tribute. The lyrics on the album are simultaneously heart breaking, uplifting and comforting. There are also songs such as “Dearly Departed” and “End of an Era” that take lyrics and melodies from their previous releases and weave them throughout the songs in an extremely clever way that you may not notice on your first listen.

This album was four years in the making and well worth the wait. It is one of the most honest, creative, and overall beautifully crafted albums I’ve listened to in a long time. ‘Ever After’ was definitely a hard album to top, but I believe they have done it. ‘Astoria’ is going to remind the fans why they became fans of the band in the first place and just goes to prove how talented the four men in the band really are.